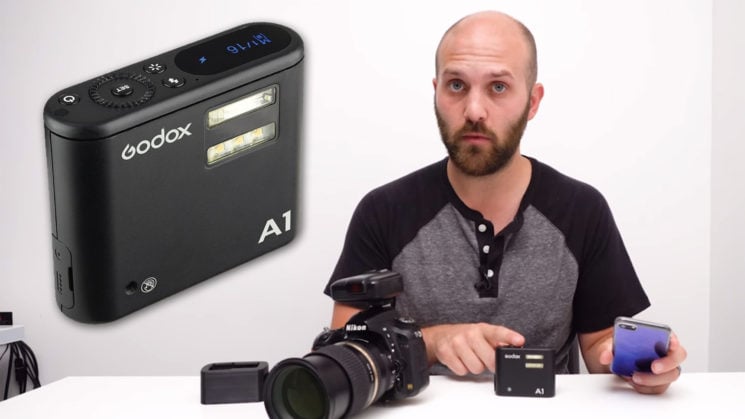 The Godox A1 has been much talked about since it was announced not too long ago. A flash trigger that could fire speedlights and real strobes… on your phone? They even did a fancy iPhone studio shoot to show off its capabilities. Then it went on pre-order. Many people thought “What’s the point? Why spend so much money on lights to use your phone?”.

They’re right, of course, but for me the big draw is behind the scenes photos. If my lights are already set up at a shoot, it takes no time at all to whip out my phone and grab a shot for Instagram. Some hate the idea of the A1, some love it. But how well does it really perform? This review from photographer Rob Hall goes pretty in depth into the Godox A1 feature set as well as some of its drawbacks.

I was already sold on the idea of the A1 when it was initially announced, and at $69, it didn’t price itself off my list. The ability to be able to shoot behind the scenes images with my phone with my lights that are already set up is great. The app also looks quite interesting. Being able to set presets is a fantastic idea. If only they could integrate that into their DSLR & mirrorless triggers somehow.

I put forward the idea that Godox X1T replacements should have built in BlueTooth, allowing them to talk to the app on your phone. Then, Godox did something very cool. They released an X1T firmware update that essentially provides this functionality today. You still need an A1 to do it, but now you can control your flashes with your phone app, yet fire them from your DSLR or mirrorless.

A few days ago, Rob also posted a quick video confirming that it works as I had suspected when I saw the firmware’s patch notes.

Now, if you’re shooting in the studio with specific lighting setups that you use often, you can save presets and recall them at will. Looking at the demo of this feature in Rob’s video, it works extremely well, too.

Even on location, having the flashes controlled from a phone app means you can yell out to an assistant to adjust this flash or that flash power without having to take your eye from the viewfinder. Or, if you’re regularly shooting your camera remotely anyway, now you can control your flashes remotely, too. There are many fantastic self portrait artists out there that could utilise the A1 in this way.

Rob doesn’t seem all that sold on the idea of the A1. He admits that it’s a very cool concept, but the implementation (particularly the app) still needs a little work. There also doesn’t seem to be much practical use for it in Rob’s workflow. I can see where he’s coming from, though.

For some working professionals, the A1 will be about as useful as a chocolate teapot. But for many others, it could come in very handy indeed, whether for social media or other specific tasks. I still plan to pick one up when they become available in the UK. There are some things I shoot where the A1 could definitely improve my workflow on set.

One thing we do both see eye to eye on, though, is that Godox should add the Bluetooth capability to the next generation of their 2.4Ghz triggers.