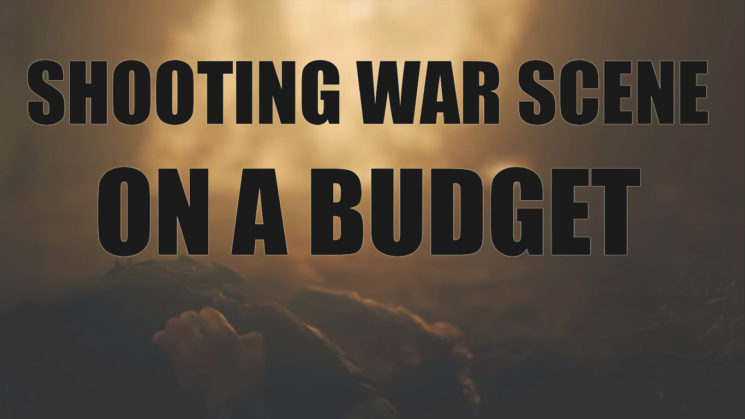 Last month, I’m sure that Avengers: Endgame and Game of Thrones were pretty much all that occupied anyone’s Facebook feeds. Both have inspired a massive number of memes, but they have also inspired Film Riot’s Ryan Connolly to create budget-friendly filmmaking tutorials.

After he showed you how to get the Game of Thrones look on a budget, here are some ideas on how to shoot a realistic war scene. It was inspired by Avengers: Endgame, and while it’s shot with a totally DIY approach, it still looks really good! All it takes is some dirt, fake blood, some lights and a minimal amount of special effects.

Setting up the scene

Instead of shooting outdoors, the team set up the scene inside. This way, they weren’t dependent on the weather conditions and they didn’t have to wait for the dark. Instead, they had full control over the scene.

To set up the scene, Ryan and his brother Josh used a blue tarp and a black blanket over it. Then, they spread five bags of topsoil over the blanket. This way, if the dirt gets moved, you won’t see the blue tarp underneath. They added some bullet shells and branches on top of that, and the scene was ready. It is a bit messy, but it doesn’t take much space to make this – just enough for an actor to lie down.

Since you’re creating a war scene, you can hardly go without some fake blood. You can buy it online, but there are a few recipes for making your own. Cover the actor in some fake blood and dirt, and you’re good to go.

The lighting setup for this scene was simple and minimal. Still, I think it looks really good in the final video. Ryan used two lights to get warm orange-reddish lighting hitting Josh from the opposite side of the camera. This simulated the glow from the fire. To bring it up, Ryan added another light with the same color bouncing off the wall to fill the area a bit more. Finally, Ryan used an Aputure 120D with a Steel Green gel bouncing off the ceiling. This added a subtle fill to the entire scene.

Ryan used a Blackmagic Design Pocket Cinema Camera paired with a lens without IS. He shot handheld at 60fps and slowed the footage in post. All this together added to the dramatic feeling of the war scene.

Since Ryan and Josh were filming this on their own, they couldn’t replicate the flicker of the fire in camera. So, Ryan created it in After Effects. He also added fire to the background in post, as well as some branches and dirt. Finally, he used DaVinci Resolve to color grade the footage.

The final result doesn’t look exactly like the scene where Captain America is lying in the dirt and debris. But considering that it was shot on a very low budget by only two men, it still looks darn good and I hope it has inspired you for your future filmmaking projects.

[Realistic WAR SCENE on a Small Budget via No Film School]