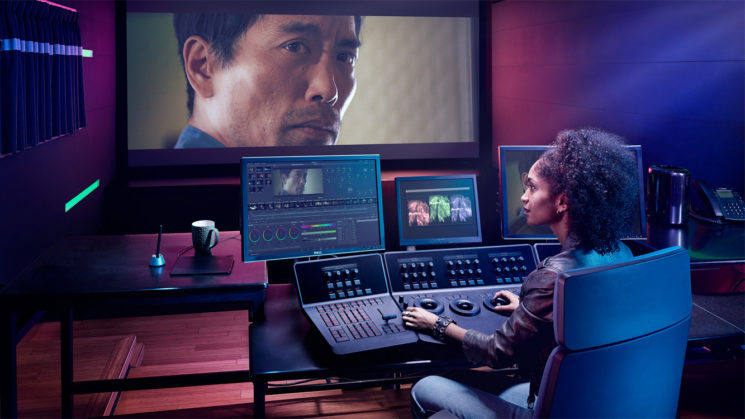 If you’ve not yet discovered DaVinci Resolve, it’s essentially Blackmagic’s answer to Adobe Premiere Pro, After Effects and Audion all rolled into one – but with a way better colour correction system. Now, Blackmagic, the company behind Resolve, has just released 8 solid hours of video training to show you how to use it.

Initially created back in 2004 by da Vinci Systems, the then “da Vinci Resolve” was to be the ultimate next-generation colour correction tool and has since become the Hollywood standard for that task. da Vinci Systems was acquired by Blackmagic in 2009 as a result of liquidation. Resolve now up to version 15 and is one of the most powerful video post workflow tools available. And it’s completely free – sort of.

There are two versions, there’s the full Studio version for $299 (perpetual license, no subscription fees), or there’s a free version, which is fully functional, except for the omission of certain features like 3D tools, multi-user collaboration, VR, etc. You also get a free copy of the Studio version when you buy a Blackmagic camera. Even the Blackmagic Pocket Cinema Camera 4K.

Whichever version you go with, though, or if you want to learn a bit more about it before you get either – even though you might as well get the free version, because it’s free – have a watch of these. It’s 8 hours of training to get you up and running in DaVinci Resolve and using all of its features.

The series covers everything from editing, colour grading, visual effects, audio processing, managing your media, content delivery and more. It also touches on the hardware control panels available for Resolve – although you might not want to watch this one unless you want to spend a lot of money.

You’re definitely not going to be able to take all this in at once, and you’ll probably have to watch all of them several times over, while you have the software running to experiment with what they’re talking about while they’re talking about it. But if you want to learn Resolve, this is a pretty comprehensive set of videos to get you started.

And when you’re done with all those, and still want some more tips and suggestions on what you can do with DaVinci Resolve, head on over to Casey Faris’ YouTube channel. He regularly puts out a lot of Resolve related content, with lots of great tutorials, techniques, tips and tricks.

It’s worth at least checking out the free version of DaVinci Resolve if you’ve never tried it before. After all, it’s free. What do you have to lose? You can download it now on the Blackmagic website.