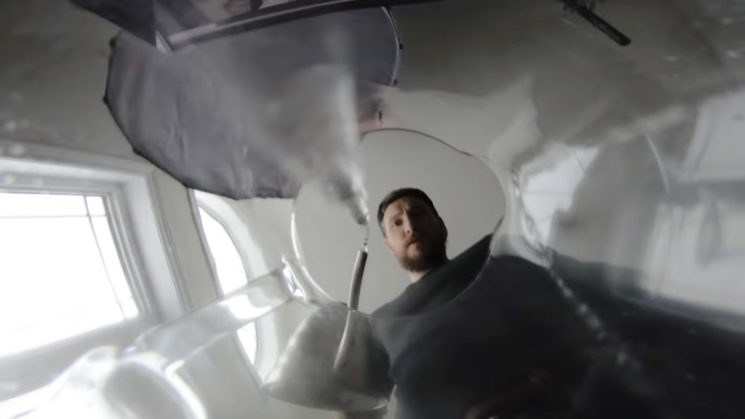 Filming myself is probably one of the more difficult things I’ve ever attempted to learn with a camera. It’s so easy when you’re filming other people when you have all of the camera’s controls at your fingertips and are able to quickly adjust. Filming yourself, though, is an entirely different set of skills. But they’re essential skills if you’re looking to start vlogging, which I have.

I’m still no expert at it, and I still have a lot to learn. But you know who is an expert at filming themselves? Peter McKinnon, that’s who. In this video, Peter provides a whole slew of advice to help you film yourself. It’s full of lots of little tips and tricks to make life just that little bit easier and get you thinking a little bit differently about how you approach it.

Now, Peter doesn’t go into any details about how to get comfortable being on the other side of the camera. That’s just assumed. And if you’re not comfortable, well, it’s up to you to figure out how that is going to work for you. Personally, I’d just say get in front of the camera and start filming. You’ll be awkward and clunky at first, but the more you do it, the better you’ll get. And, remember, nobody has to see any footage you don’t want them to. You don’t have to post everything.

But for the practical side of things, Peter breaks things up into three categories…

Obviously, your camera isn’t able to just float in mid-air, and using a drone isn’t always practical, especially indoors. So, there is some gear that you’ll need besides your camera. And that comes in the form of support. You need something that’ll let you put your camera where you want it to be without having to hold it. After all, if you’re in front of the camera, you’ll probably want both your hands free. And you may not even be able to reach the camera anyway.

Peter has a few recommendations for this, and I’ve added a couple of my own to the list, too.

You could also use a motorised slider. I see Levi Allen use this method regularly when he’s talking to the camera or shooting b-roll clips. The slight motion from the slider adds great interest to pieces spoken to camera and other clips in general.

This is one the most vital part of telling your story. Nobody wants to see just one long boring wide shot for 30 seconds with no narration. You’ll want to find multiple angles that show the important steps of your journey through the story. You don’t always even need to be completely “honest” with what you’re filming, either. You just need to be able to get your point across.

Peter uses an example of him making coffee from a recent vlog for this video. In one part of that vlog he wanted a view from inside the pot looking up at him as he poured water in. Well, his GoPro wouldn’t fit inside the coffee pot, so he just used another glass container. The shot lasts barely a second, and most people will never notice.

Along with multiple camera angles comes pacing. Again, noody wants to see one boring long shot with a static camera. And even if all your camera angles are static, you can still fake the perception of motion by cutting quickly, especially if you’re able to mix it up with shots that are handheld and moving the camera. The shots are up long enough that people can see what’s going on, but switch fast enough that people don’t notice the camera’s staying still.

The pacing also helps to cover up the fakies. The example previously mentioned of water being poured into the pot looks like this. But that angle happens for such a short amount of time that you don’t even think about the fact that the pot is a different shape, and that there’s no filter in it. Or, indeed, that the water is being poured from a completely different container.

Again, filming yourself is not easy. It takes a lot of practice and experimenting. But, as Peter’s video illustrates, sometimes it just requires thinking a little differently about your approach.

How to step up your vlogging game and film yourself professionally