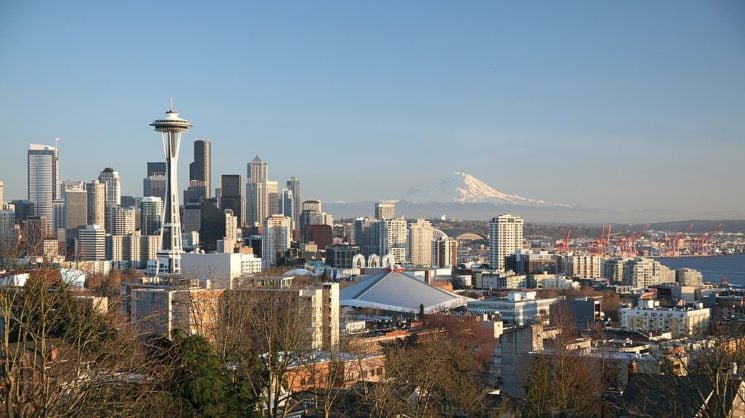 In January 2015, the Space Needle in Seattle had a 360 webcam installed. Over the past three years, the camera has been taking a 360 panorama of the city every ten minutes. Google engineer Ricardo Martin Brualla decided to turn the three-years worth of images into a timelapse of the city. As a result, you can see the seasons changing and the city growing before your eyes, in under four minutes. It’s captivating to watch, and Brualla shares some details about how he did it.

Brualla explains that the camera would take a panorama image every ten minutes, every day. However, he used two photos from specific times each day: one taken at 10:30 am and other at 2:30 pm. The photos from some days are missing, probably because the camera was temporarily offline for whatever reason. Still, he ended up with 2166 panorama images. The video he made is the same size as the panoramas: 8283×1080, about 9 MP.

When he collected the photos and created the timelapse, Brualla had to motion-stabilize it. The camera wasn’t completely still due to the wind and other natural forces, so the initial timelapse was shaky. The second step was to remove the flicker that appeared due to different weather and lighting conditions. Brualla visualizes the process in this short video.

The resulting timelapse unveils growing Seattle as you watch. It’s an interesting and powerful scene to watch. Other than that, you can see the leaves changing colors as the seasons go by. There are also “ghost ships” appearing from time to time. They seem transparent in the timelapse because they dock into the Seattle’s waterfront for only a day or two per week. In this timelapse, it gives an interesting, slightly spooky effect.

If you’d like to learn more about this timelapse and how it was made, head over to Brualla’s post on Medium. And if you’d like to see another timelapse created over the years, check out this one from Google.

This 8K timelapse shows a tornado forming right before your eyes

« Scientists film a rare “fireworks jellyfish” 4,000 feet deep
How to film yourself when nobody’s around to help »