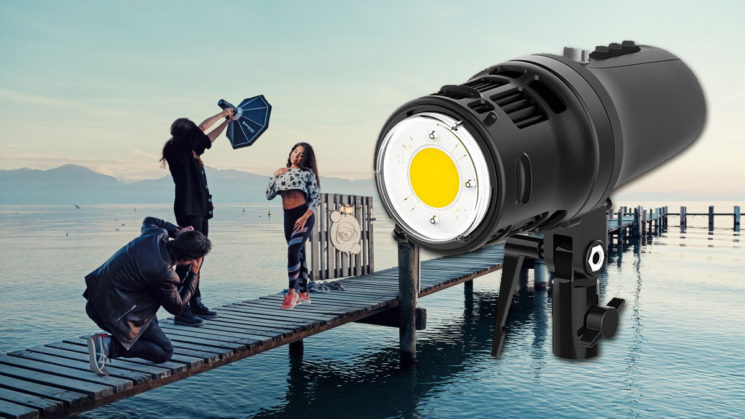 Elinchrom has expanded its lighting range, adding to its long-standing range of strobes with a continuous LED light. Manufactured by Light & Motion in partnership with Elinchrom, the Elinchrom ELM8 is a portable continuous LED light with an EL mount. For Elinchrom strobe users, this means it should work with all your existing modifiers.

According to the Elinchrom spec sheet, it looks like a fairly impressive light. It’s daylight-balanced, with a CRI and TLCI over 90, and has a hair under an hour to just over four hours of battery life, depending on the power setting.

The Elinchrom ELM8 is completely cordless. It doesn’t even have one going to an external ballast or battery pack. If features an integrated battery, although it doesn’t appear to be user-replaceable. So, if it dies while you’re in the middle of a location shoot, you don’t seem to be able to just swap it out for a fresh one. You’ll need a whole other $1,700 LED light if you want to keep shooting.

You can power it from an AC adapter, too, as illustrated by the screenshot from the ELM8 manual below. But, when doing this, the max power drops down from 8,000 Lumens to 6,300 lumens. And Elinchrom doesn’t recommend running it from an AC adapter while simultaneously charging the battery due to heat build-up causing performance issues. 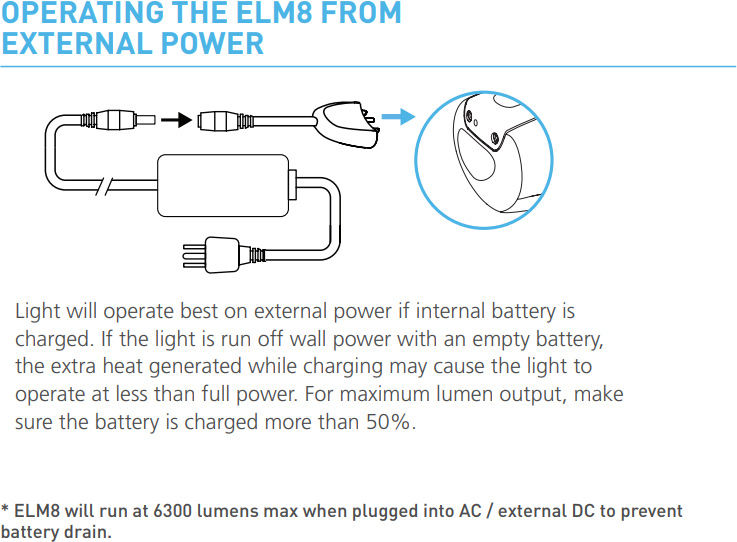 The ELM8 does feature a built-in fan, which kicks in at low speed when the output exceeds 5100 lumens in order to help keep things cool. Once you get past 6300 lumens it goes into high-speed mode. They also say that certain 3rd party modifiers can trap heat, thus lowering the light’s output, too.

I have to say, I’m a little underwhelmed. For $1,700, I wouldn’t expect to read about overheating issues like this in the manual if I were considering a light at this price point. And I’d expect to be able to buy an extra battery or two, as well. Sure, up to 245 minutes might sound like a long time, but when you’ve got to ramp the power up to fill a big soft modifier, you’re going to be chugging that battery in an hour. And there doesn’t appear to be any kind of V Mount power alternative.

Compared to Aputure’s recently announced successor to the very popular C300D, the C300D Mark II is priced at only $1,099. You’re still well under the ELM8 price, even after buying a couple of V Mount batteries to power it. And you always have the option to buy more to keep it powered after your first pair run out – or switch to an AC adapter without having to worry about reduced power due to discharged batteries.

If you’re a photographer using Elinchrom gear, though, have a lot of EL mount modifiers already, and you’re considering the switch to video, then it may be worth taking a look at.

The Elinchrom ELM8 is priced at €1,379/$1,699 plus tax, is apparently available now, although I’ve not found anywhere that has it up for sale or pre-order yet. You can find out more about it on the Elinchrom website.