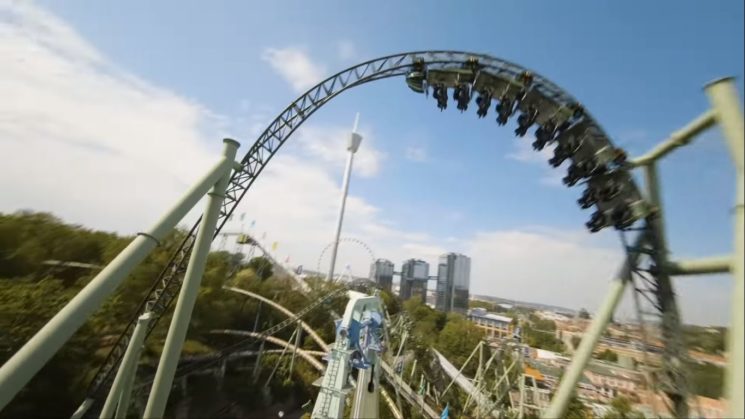 FPV filming pilot from Sweden, Viggo Koch, recently took his drone to the Liseberg amusement park in Gothenburg. He followed the HELIX rollercoaster and thanks to some mad piloting skills, he shot footage that might make you a bit dizzy, but it will also make you go for a ride right now!

Watching the video, you’ll notice that there are no people on the rollercoaster. That was done for safety reasons, and if you ever want to shoot something like this, keep in mind that you need permission and proper conditions. Viggo made the video in collaboration with Liseberg, so everything was shot before the people were there.

The video was filmed on a GoPro 6 black in 2,7K, 25 fps, at 1/50s shutter speed and with an ND 16 filter, Viggo explains on Reddit. It was stabilized with ReelSteady GO. “There is no artificial motion blur, it just looks a bit more extreme due to the fisheye correction which stretches the image in the corners,” he adds.

Viggo’s drone follows the rollercoaster as it ascends, descends and makes sharp turns. Still, everything looks so smooth and wonderful to watch. I get sick on a children’s swing (I’m not even joking), but watching this video makes me try a rollercoaster ride!