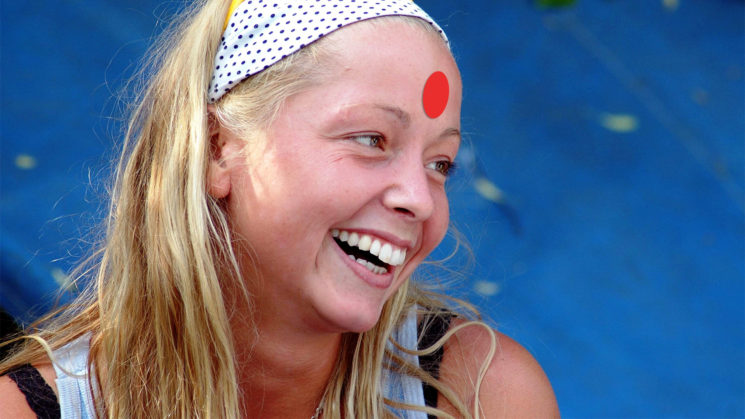 The whole issue of privacy in a public place seems to keep coming up. People want their privacy, I get that. But they want it in public places, where everybody else can see. While privacy advocates might object to cameras being pointed anywhere near their general direction, they seem to forget they are seen by potentially hundreds of CCTV cameras a day.

One festival company, Haarlem Culinair, thinks they’ve found a solution, though. They’ve come up with a pretty ingenious opt-out scheme for festival-goers. Stick a great big red dot on your forehead.

The red-dot policy was introduced at a previous event. It’s listed in the terms and conditions handed out on flyers for the festivals.

Rule 12 is the one, with the little note below it, which (Google) translates to…

12. You give permission to use the photos and / or videos taken on the site for publication purposes

Note to point 12:
If you really do not want to be recognized in pictures or photos, then you should pick up a red dot at the organizer and stick it on your forehead. In the case of a check for publication, your image will be bleached. It may also be a lipstick-dot.

I always thought the idea of privacy in a public place was a pretty silly idea, and many legal systems around the world seem to agree. And a big red dot in the middle of your head just extends silliness. But apparently, it is necessary, especially with new GDPR regulations and photos of your face seemingly classed as “biometric data” thanks to advances in facial recognition and AI.

In the past, you could simply publish photos, but now you’re still working for five weeks if you have to check with everyone whether a photo or video can be put on the website.

Once somebody with the red dot is spotted in a photo, then the organisation does not use those images, according to nu.nl. A big red dot definitely makes it quite obvious and easy to spot.

Haarlem Culinair organisers say that since the scheme began, out of 70,000 visitors, 3 have put red dots on their foreheads.