MRI is used to salami objects into small slices and get a better idea about what’s inside them without breaking them open.

Cross section light painting is the exact reverse process where a photographer uses a set of images, each corresponding to a slice of the original object to recreate the salami. (OK, technically, it only recreates an image of that salami).

While it is not trivial to find such detailed slides images of the human body, there is a scientific foundation – The Visible Human Project – that aims at making such images accessible and shares two data set of such “slide” humans: A mail and a female. 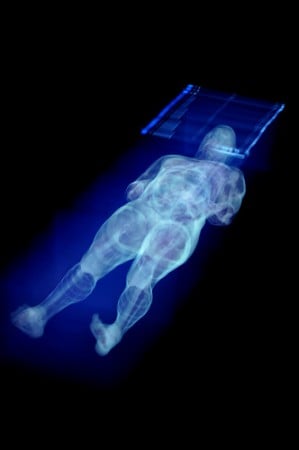 Using a screen displaying the video and setting the camera to long exposure, Andyleach was able to extrude the body as an image.

“In 1993 convicted murderer Joseph Paul Jernigan was executed. Having
donated his body to scientific research, he was preserved and cut in
to 1,871 slices as part of the ‘Visible Human Project‘, to provide
high resolution, cross section images of the human anatomy.

“Using these images in the form of a video animation vimeo.com/21515164 coupled with long exposure photography. It is possible to recreate
and extrude a holographic representation of his body.”#

The idea was inspired by project 12:31 that used a similar method.

Here is how the video that Andy used looks like

Exuding elements for light paint has been here for a a while, you may remember an App called Holographium that extrudes text that we covered back in 2010.

How To Create A Land Cross Section Photo In The Studio