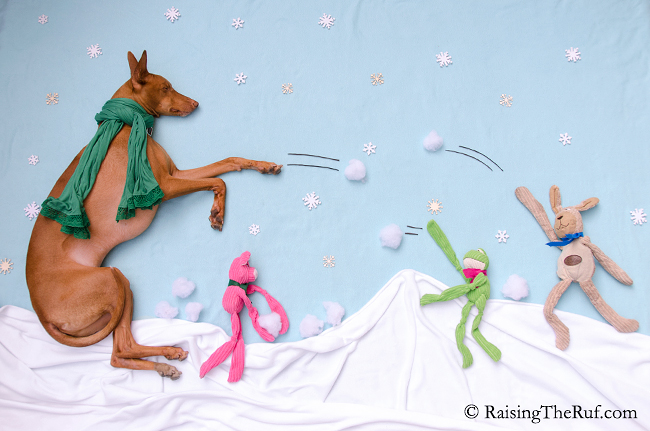 Most dog owners wonder what their dog does in his dreams, but in this case the dog is the only one who doesn’t know what he’s up to when he sleeps.

Sara Rehnmark takes advantage of her dog being a heavy sleeper to create funny scenes around him.

For Rufus, a three year old Pharaoh hound, even sleeping is an adventure. 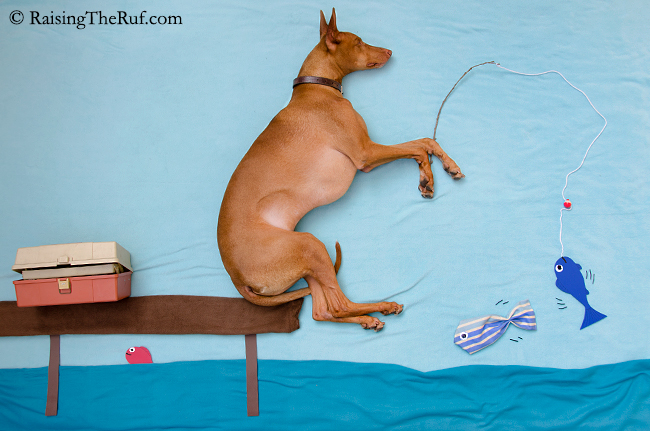 Being a fan of William Wegman’s work, Rehnmark says she’s been taking goofy photos of Rufus since he was a puppy. The first photo in what eventually became the “Adventures While Sleeping” series was taken a year and a half ago for a birthday card.

“Every year my dad and I make funny birthday cards for each other, so this was a birthday card for my dad!”, said Rehnmark adding that since her family is from Sweden she decided to turn Rufus into a reindeer, as “a nod to the Sweden, the land of reindeer, forests, and nature”. 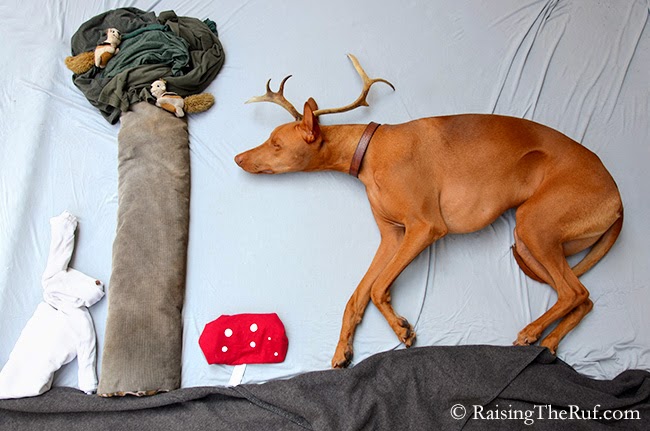 reindeers and chipmunks and rabbits, OH MY!

The first question that came to mind when I saw this series was if Rufus really slept through all the activity around him.

Rehnmark in response shared how she was able to capture these humorous photos:

“Most of them I set up while he is sleeping and if he wakes up he usually looks at me like I am crazy and puts his head right back down.  The others he comes over and lays down while I am trying to set up and takes a nap.  Also, he will let me mold him like putty if he knows there is a treat is in it for him!  He is similar to other sight hounds in that when he is outside he is very energetic, and when he is inside he can be a real couch potato”. 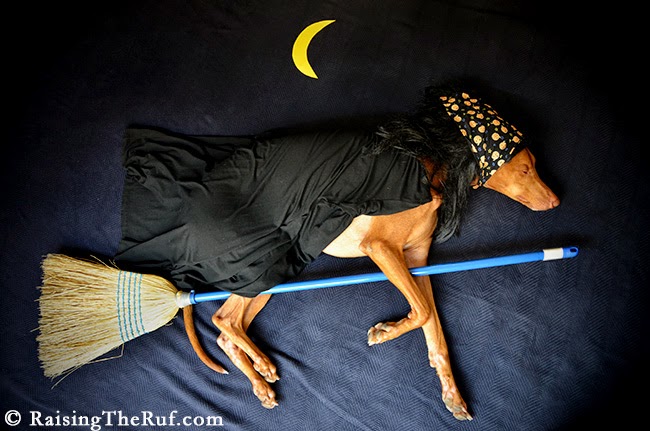 I’ll get you, my pretty, and your little dog too….

“I’ve got a notebook full of ideas and sketches!” said Rehnmark, adding that the huge response these photos have gotten has inspired her to continue.

Adding 2-3 photos a week to the series, the actress/model and her comedy writer husband Brian are planning to publish a children’s storybook  and calendar featuring Rufus’ adventures. 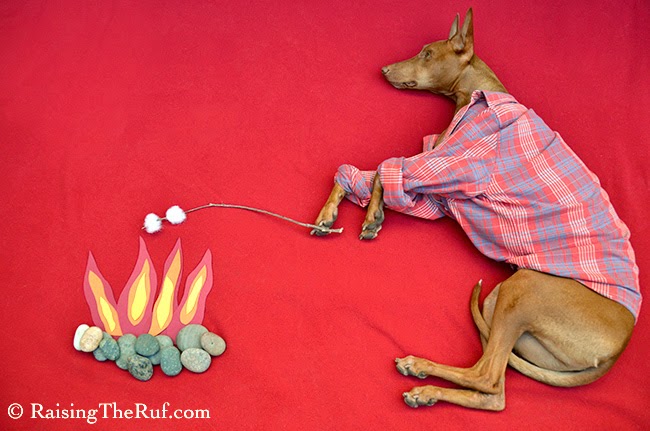 “Rufus really does light up my life. I can be having a bad day and then I look over at Rufus and he’s looking all goofy with his lips stuck on his gums (Like Jim Carrey’s Fireman Marshall Bill) and I can’t help but crack up laughing”.

This immediately reminded me of Anthony Lyons’s love for dogs and how dog photos sent by Facebook users are helping him battle cancer. 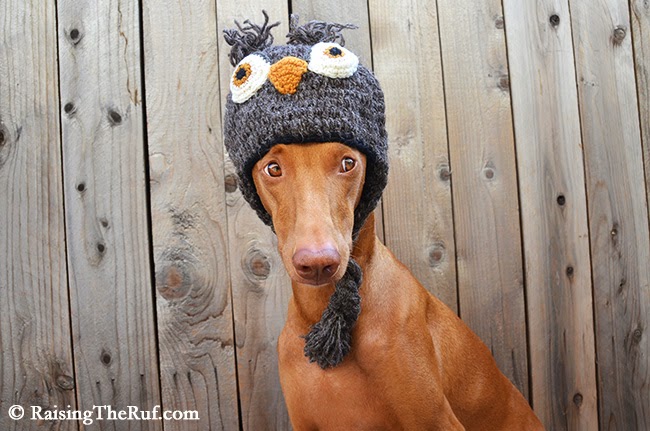 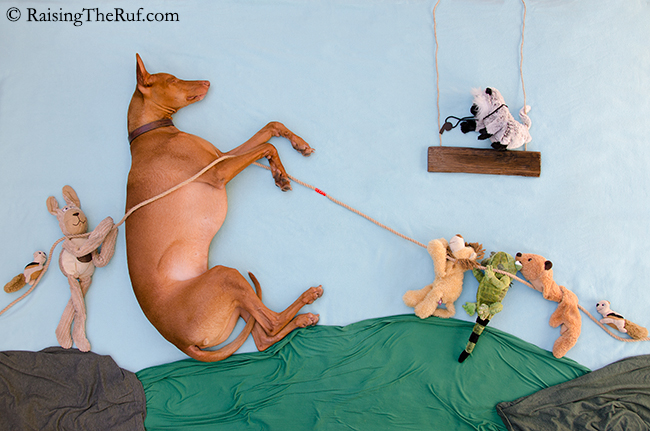 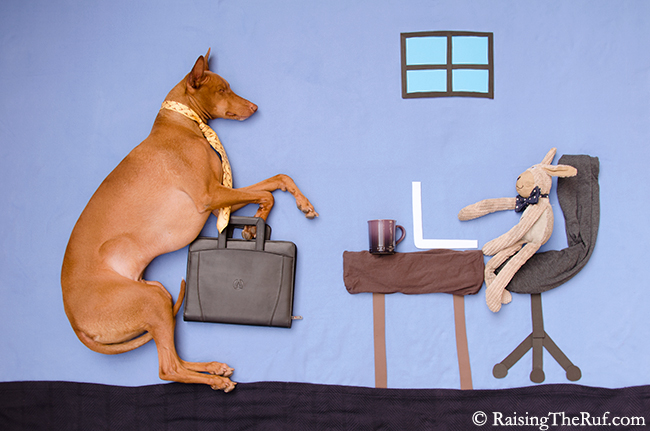 this week I’ve been working like a dog. TGIF!!!! 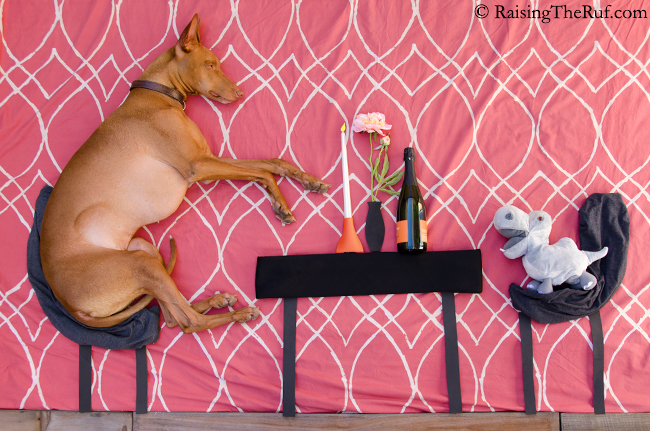 I ruff you!! Happy Valentine’s Day! 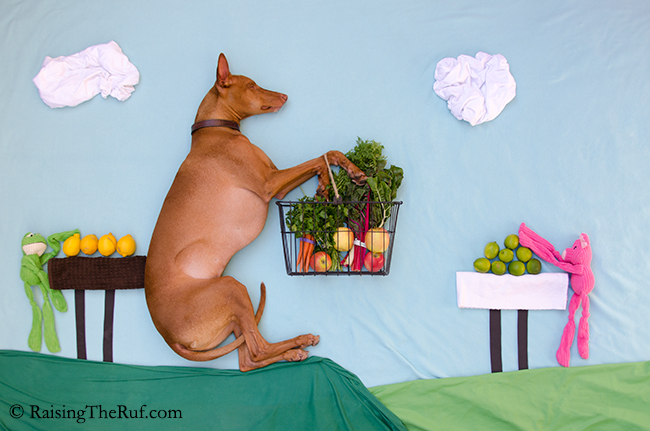 this little piggy went to the market… to sell Ruf some limes! 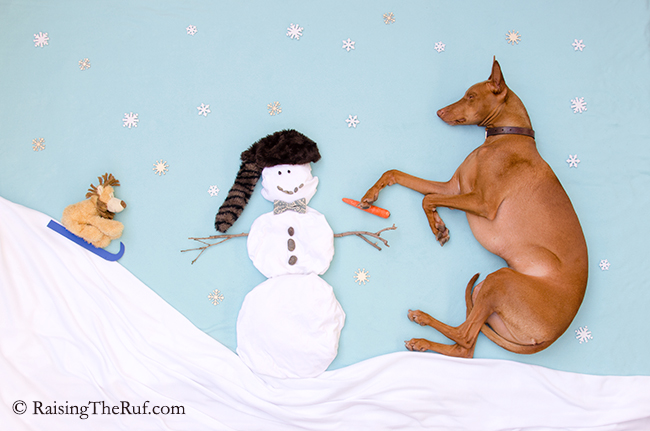 see? you can pick your friend’s nose… 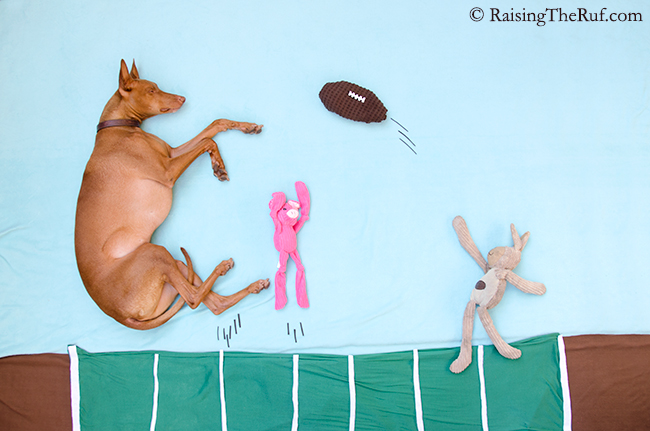 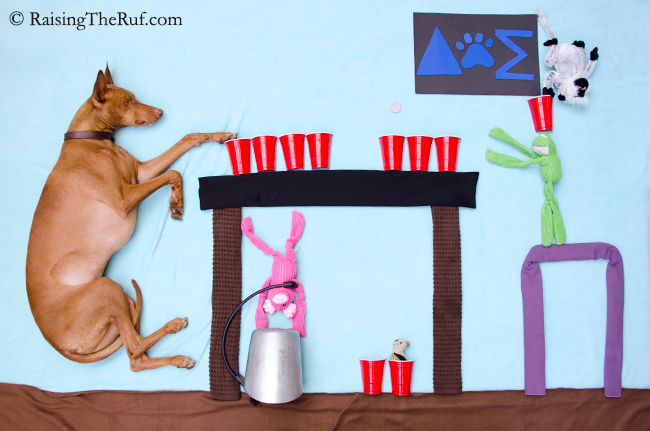 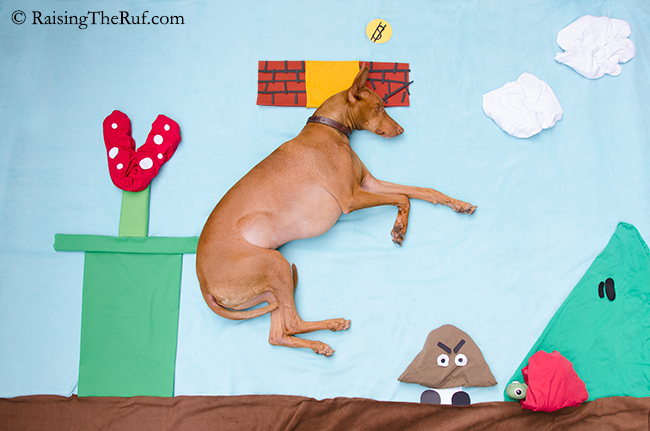 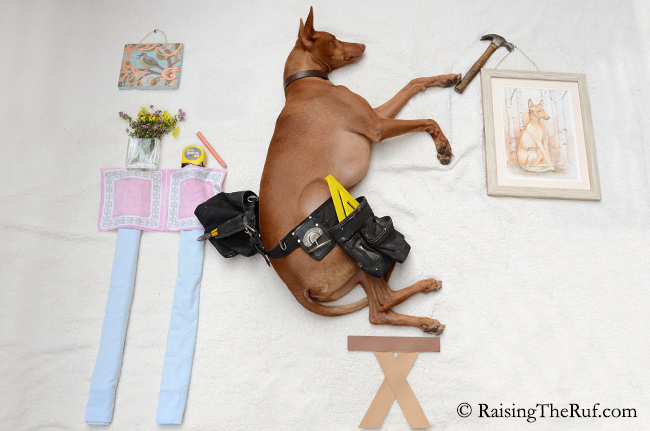 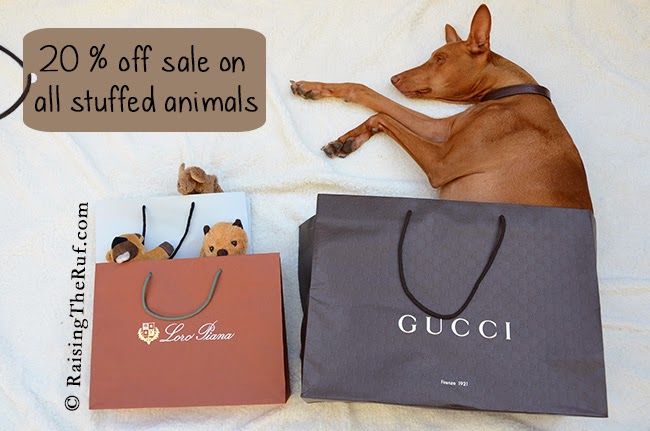 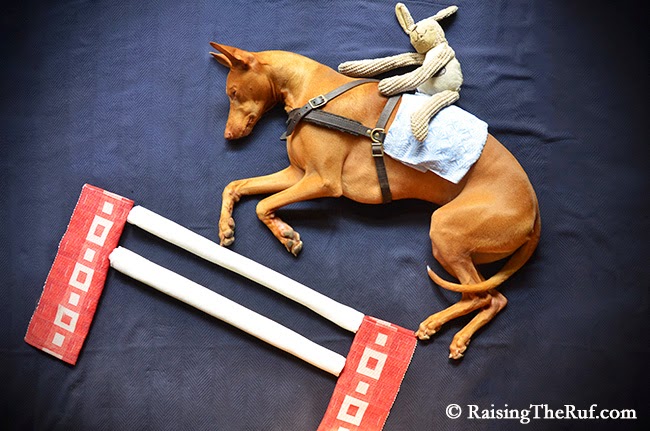 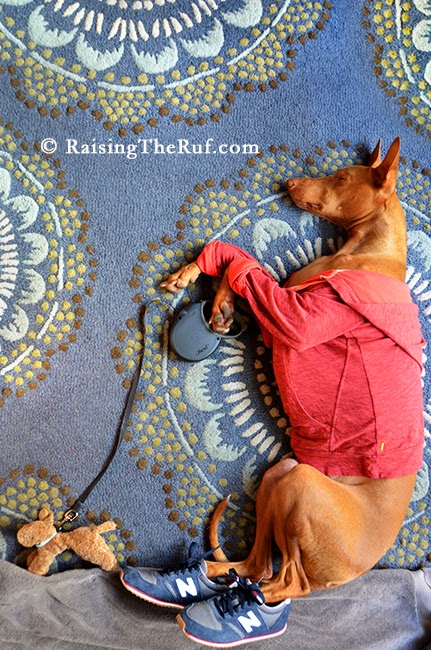 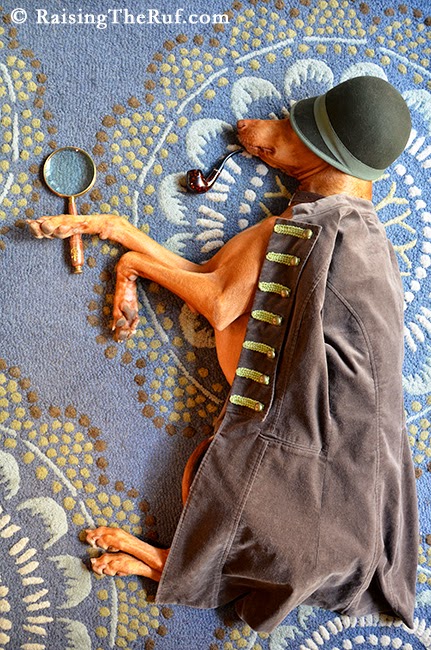 My name is Sher-dog Holmes. It is my business to know what other dogs do not know… 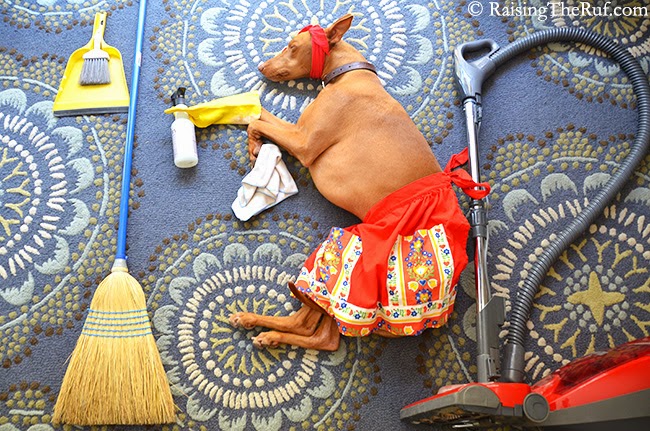 Housekeeping. You need me to fluff pillows? 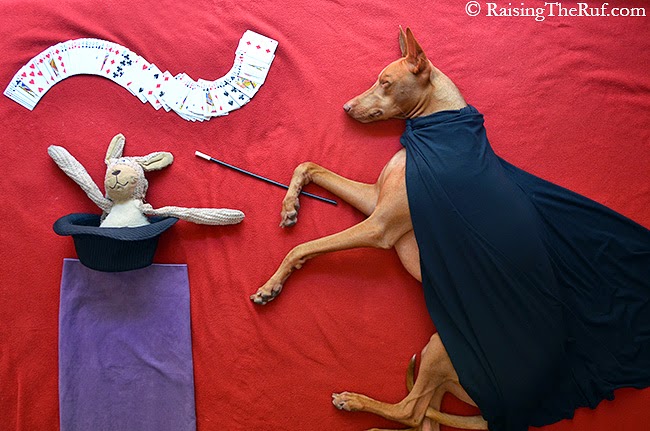 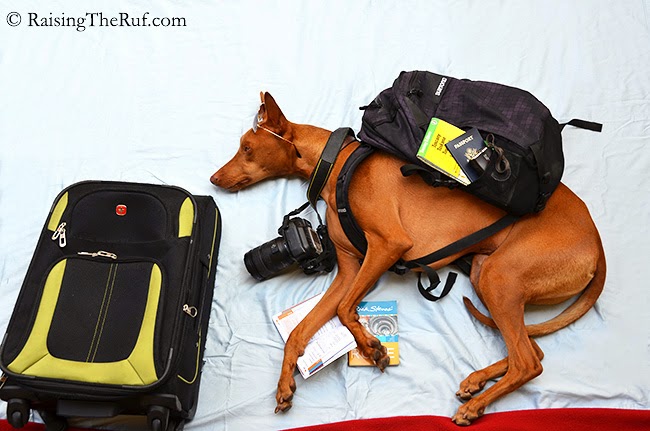 bags are packed, ready to go