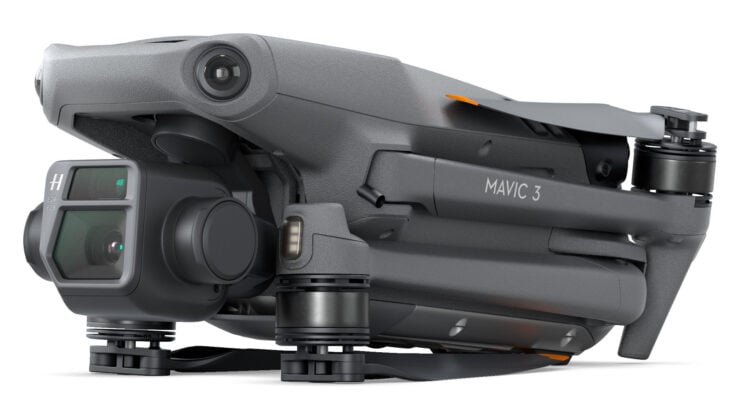 DJI has now officially launched the new DJI Mavic 3 boasting better sensors, a dual-camera system, omnidirectional obstacle avoidance, smarter flight modes and longer flight times over the Mavic 2. DJI says that the Mavic 3 has been “redesigned from tip to tail” to take things up to the next level.

And it sure seems to have done that. It shoots 5.1K video at up to 50 frames per second with a large 4/3″ CMOS Hasselblad camera, 4K 120fps for high-quality slow-mo and features redesigned batteries that let you stay up in the air for a very impressive 46 minutes. Omnidirectional obstacle avoidance also sees potential issues from up to 200 metres away.

There are two versions of the camera. There’s the standard model and the Cine model. Very little seems to separate the two and there certainly seems to be no visual differences save for the addition of the “CINE” wording to the arm, as shown below. That being said, the Mavic 3 Cine Edition does add support for Apple ProRes 422 HQ encoding and comes with an internal SSD for 1TB of onboard high-speed storage – which you’ll need if you’re shooting 5.1K ProRes 422 at 3,7723Mbps.

One of the big selling features of the Mavic 3 is its new dual-camera system. It comes with a 4/3 CMOS sensor, upgrading the Mavic 2’s 1″ sensor, that shoots 20-megaapixel stills in 12-bit raw and videos in 5.1K 50fps or 4K at up to 120fps for some nice aerial slow motion. The larger sensor also provides a higher dynamic range (12.8 stops) and better control over the noise levels in photos and video footage.

The main 4/3″ camera has a 24mm equivalent autofocus prime lens with an 84° field of view and a variable aperture range of f/2.8-11. The second camera features a 162mm equivalent telephoto lens and an f/4.4 aperture. The Mavic 3 combines both cameras to create a “28x Hybrid Zoom” which incorporates both optical and digital zoom. 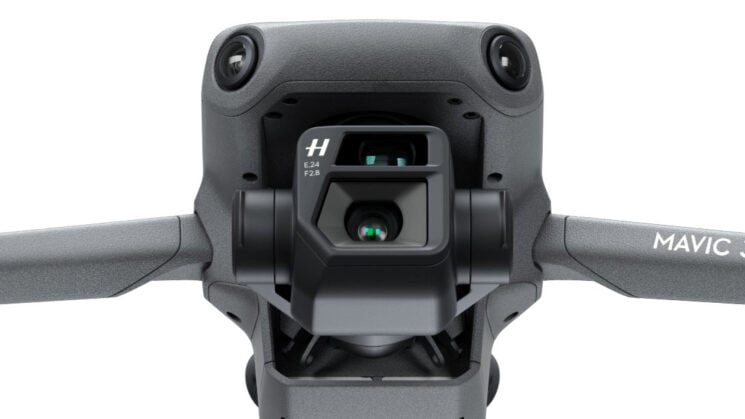 Hopefully, there’s a way to turn digital zoom off and force it to only use the optical modes, because digitally zooming in always looks bad and it usually only looks slightly less bad when you can do it on an actual computer rather than on the device itself. Digital zoom is basically just scaling up. That being said, recent advancements in AI from companies like Adobe and Topaz are producing some pretty great results for upscaling. So, maybe it won’t be that bad.

The new omnidirectional object avoidance system and ActiveTrack 5.0 allows users to sense obstacles even in Normal mode. ActiveTrack 5.0 also allows the MAvic 3 to move with subjects as it follows or moves around a moving subject and if the subject goes out of frame, visual sensors will continue to track the subject intelligently and pick it back up when it reappears. DJI says this offers a much more fluid and diverse system of camera movement. 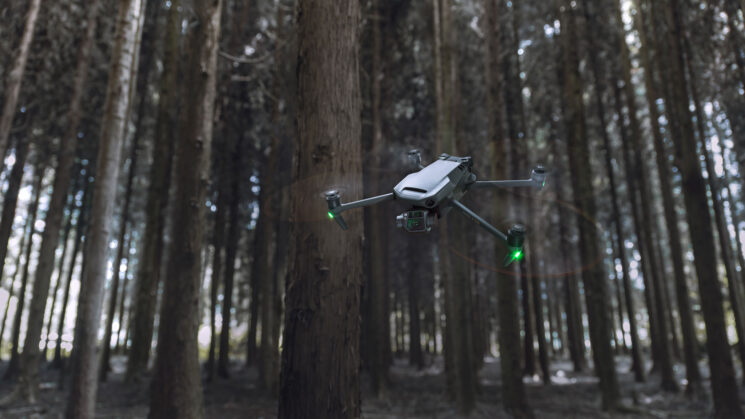 Longer flight times of up to 46 minutes (in “ideal conditions”) come to the DJI Mavic 3, thanks to a new battery design and a more streamlined drone that DJI says produces 35% less drag than previous generations. Less drag is certainly going to put less strain on the motors, meaning they require less juice to do their thing, thus also extending battery life. It also means faster top speeds!

Built-in GPS, GLONASS and BeiDou satellite compatibility provide for easier locking onto its own location, for automatic Return To Home (RTH), waypoint missions. DJI says that the RTH system in the Mavic 3 extends previous functionality by looking for the shortest, safest and most energy-efficient route to land back at the starting point to help ensure it gets back before your battery goes flat.

Of course, you get all of the usual intelligent flight modes, including MasterShots, Panorama Mode and all the rest of them. You also get QuickTransfer to easily shift content directly from your drone to your smartphone without linking with the remote controller.

Overall, it looks like a pretty worthy upgrade to the lineup, although it comes at a cost – a significant one, in the case of the Mavic 3 Cine. The DJI Mavic 3 Cine is available in three packages.

You can find out more about the DJI Mavic 3 on the DJI website. Shipping is expected to begin any day.