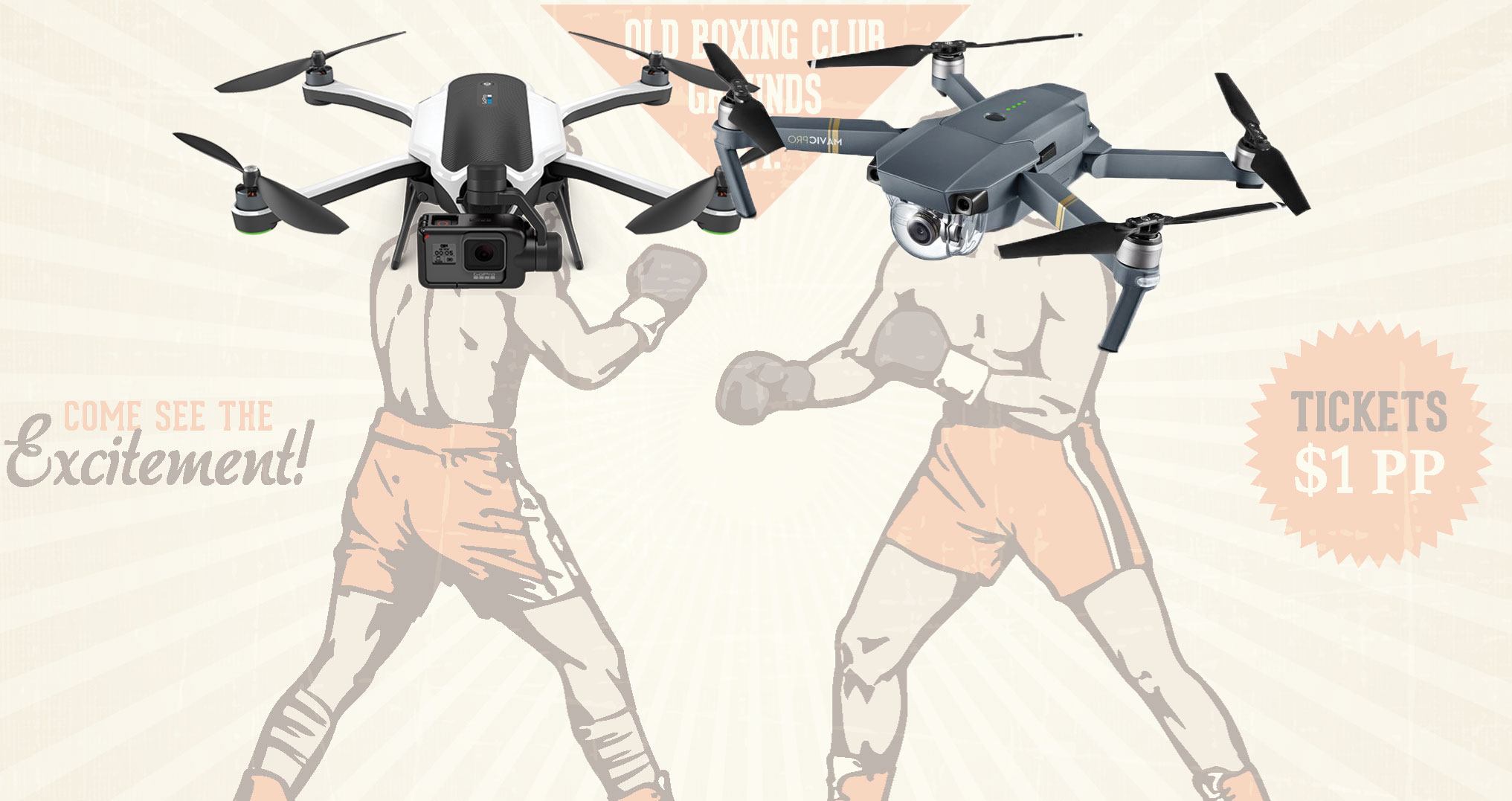 It takes a lot of balls to be in the biggest photography show in the world, have a drone ready and be silent about it. This is exactly what DJI did, and it got me wondering. GoPro announced Karma – the company’s first venture into Drones (or anything non action cam for that matter), which took a lot of press, and DJI just let it happen and did not try to steal the spotlight. They simply announced Mavic a day after the show.

You know what this feels like to me? Like those fighting movie scenes where the odds are so off, that the big guy lets the small guy throw all his punches, then plant him with one stroke. To gouge if this feeling is correct, I researched and put together a side by side comparisson of both drones, feel free to join and voice your opinion.

OK, so this is the first drone for GoPro and for a first drone they did quite a nice job: folding arms design, low weight and support for three of the company cameras (so you can reduce price down to $799 if you have a GoPro Hero4 Black or GoPro Hero5).

On both the hero4 and Hero5, the video specs are much alike: 4k@30FPS.

When the excitement about Karma went away, DJI introduced Mavic. This is by no means DJI’s first drone. After a complete Phantom line, an Inspire line, and a range of Zenmuse cameras, they have “some” experience.  We expect more from DJI and I think we got it. The camera is a 4K@30fps and is non replaceable.

The Karma uses a 75.4Wh LiPO battery capable of 20 minute of flight time. The Mavic has a 43.6Wh battery but can fly for 27 minutes. So, that means half the battery power equals 35% more flight time. (not surprisingly the GoPro battery is double the weight of the Mavic)

Both drones have some smart flying modes where they can track a subject, go around it and perform various cinematic moves. Weirdly, the Karma has no follow-me feature. Something that makes a lot selfie kinds of video almost impossible (skying, motorcycling, and anything where you want to focus on your sports rather than on flying). The Mavic, on the other hand, uses DJI’s “ActiveTrack” and will let you track, profile or fly while focusing on your subject.

Both drones have a game&watch dual deck style controller, but can also be controlled via an app.

DJI uses their own camera, which is a 28 mm (FOV 78.8° – 35 mm format equivalent) at f/2.2. GoPro uses a GoPro Hero 4 or 5, which means basically the same. Until GoPro adds a new camera to the range there is no significant difference.

Both drones use a 3 axes gimbal, and I would expect that results will be pretty much the same, in terms of smoothness. Time and reviews will tell.

I guess the Karma does not need obstacles avoidance as it is definitely less autonomous, but the Mavic has a ton of tech just for that sake. It has 5 cameras, 2 sonic sensors and the usual GPS system to help it not kill itself.

The GoPro Karma weighs about a kilo and add to that a 0.5 kilo battery (so 1.5k). It’s about 36x22x9cm big and from what I gather (and the fact that the gimbal is exposed) it would need its own bag.

OK, this is probably not a deciding factor for someone who wants to fly a drone for shooting, but, it may be a factor for other things, so here goes:

Which one is the drone for you?

« How to properly use the healing brush tool and why it needs a hard edge
Indestructible LED panels, Sub $500 vectorscope monitor and wireless variable ND filter »