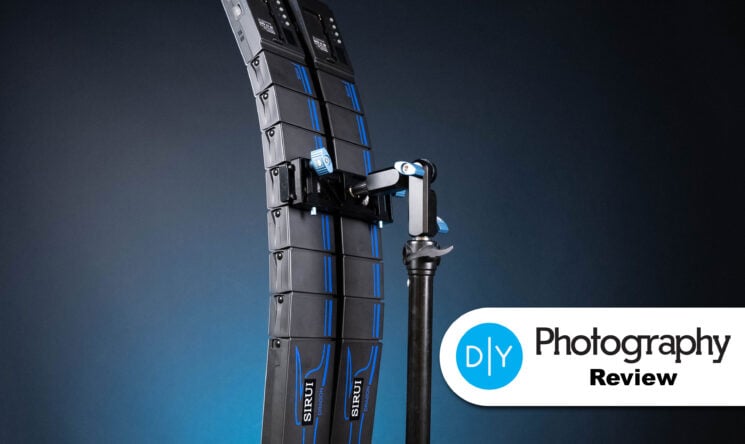 The market for photo and video LEDs is becoming quite commoditized. Having good CRI (95+), both RGB and white LEDs, or an app, is not enough to compete in the market anymore. This is why brands are turning to fight either on price, quality, and service or, most interestingly, on features and innovation. Enter the Sirui Dragon Light, a bendable, app-controlled RGBWW LED strip. While this is not the first bendable light (see KYU-6), it is the first big, high-output flexible light. And this is worth a look.

Sirui is well known for its tripod line and its anamorphic lenses, so it is interesting to see how their knowledge of other photography lines will translate into making an LED. And right off the bat, you can see it is not a tube, it is not a panel, it is not a COB, it is something else entirely.

We received the two lights kit, which is $399, and includes the following items: 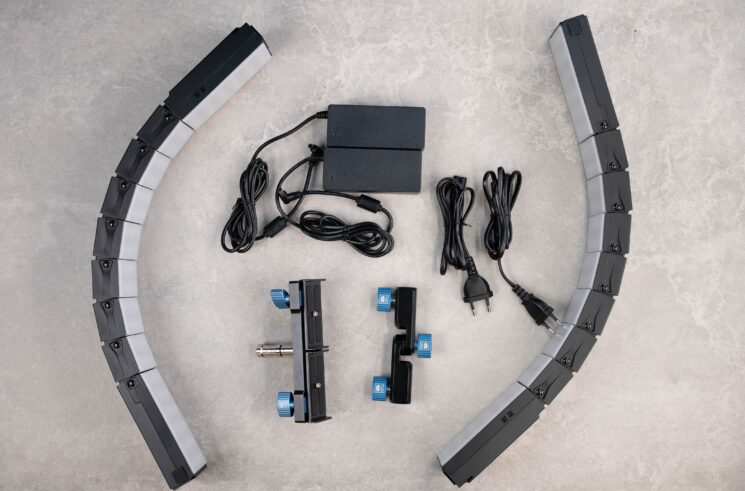 There is another smaller kit with one light for $199, if you don’t want to commit as much.

All and all, the light is well-built, and the brackets have that Sirui “tank quality” signature.

What is an LED Dragon light?

Good question. I was wondering the same thing. The actual like is built from nine panels (or scales if we stick to the Dragon terminology). There are seven short LED panels in the middle and two large LED panels on either side. One of them is the control and power Panel. I can see why Sirui named it the Dragon Light. The light kinda resembles a Chinese dragon – those are long snake-shaped creatures, unlike our western dragons. 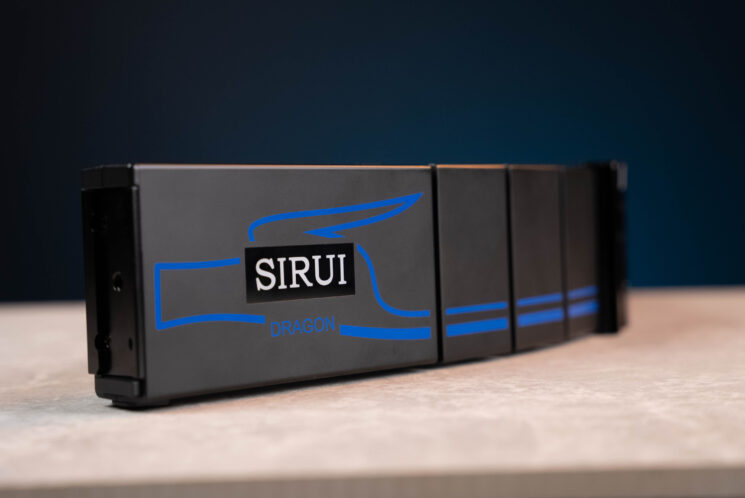 Every two panels are connected with a hinge. It is not easy to move, but it stays in place once moved. This is the mechanism that gives the light its dragon-tale flexibility.

Each unit has an array of warm white, cold white, and RGB LEDs. (Hence the acronym RGBWW LED). Combining those five variants gives quite a lot of control over the light, but I will get to this later. 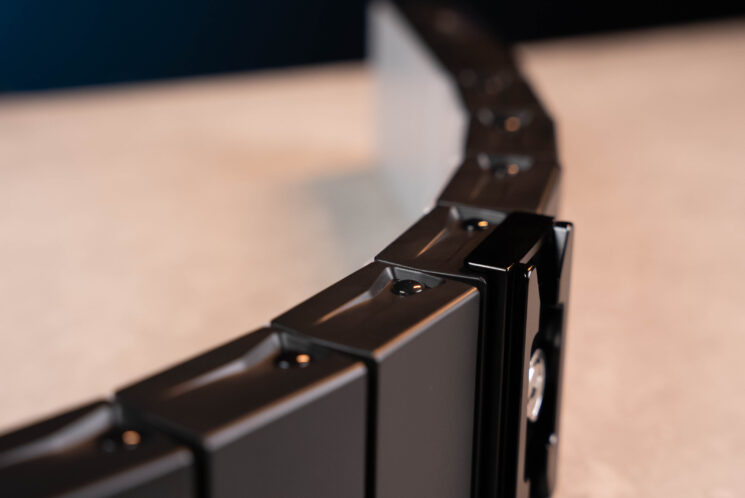 The last panel – the tail – is the control panel, and it is a bit different from the rest of the panels. This is where you can hook up power, control the light, and turn it on or off. All and all, each strip is about 58cm by 7.5cm (or about 23″ by 3″)

Obviously, the most intriguing feature of the Dragon Light is its ability to bend. And the Dragon Light bends in an interesting way. If you bend the light backward, you get an arc that throws light to a bigger area. It bends about 30 degrees, making it a good application when you need a wide light throw. A green screen or a white backdrop are two very good examples where this feature is useful.

If you bend the light the other way, it bends more and creates almost a semi-circle with all the panels facing the center. This is an interesting solution if you need to light a product from more than one side. 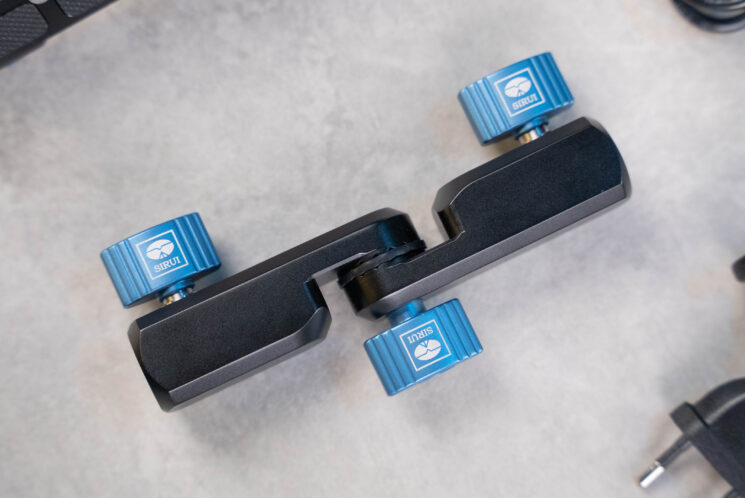 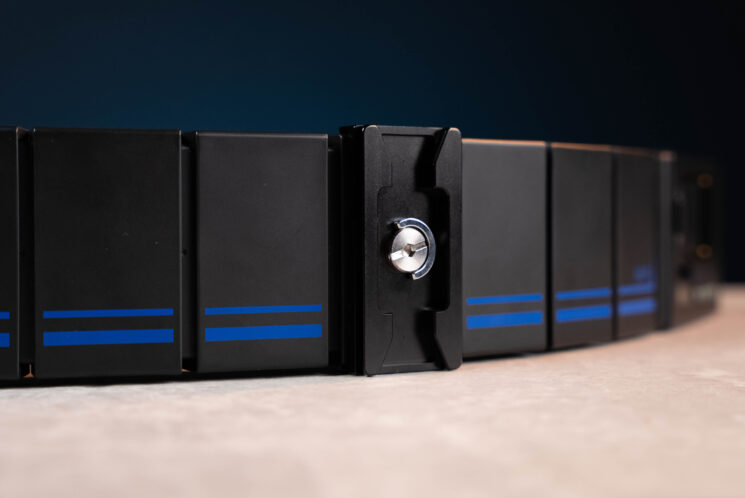 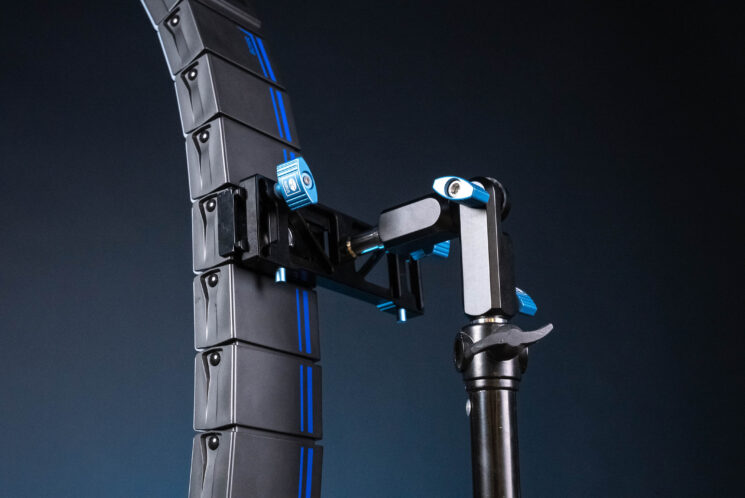 Mounted on a stand

To make things even more interesting, you can connect the two strips into one long 120 cm strip. This is serious strip light power and can be a great application for side lighting.

Each end of the dragon light has a small 1/4-20″ socket for vertical mounting, and there is another bracket set that lets you mount the strips side-by-side to make one big fat bendable panel. This is a good reason to go for the bigger kit if you can afford it. 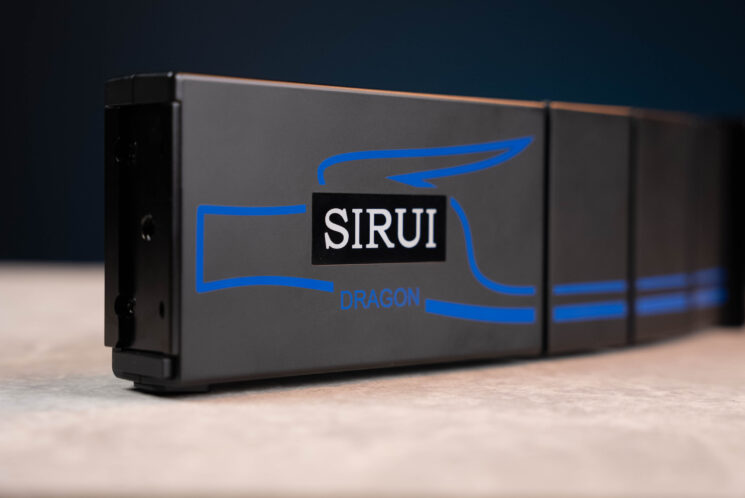 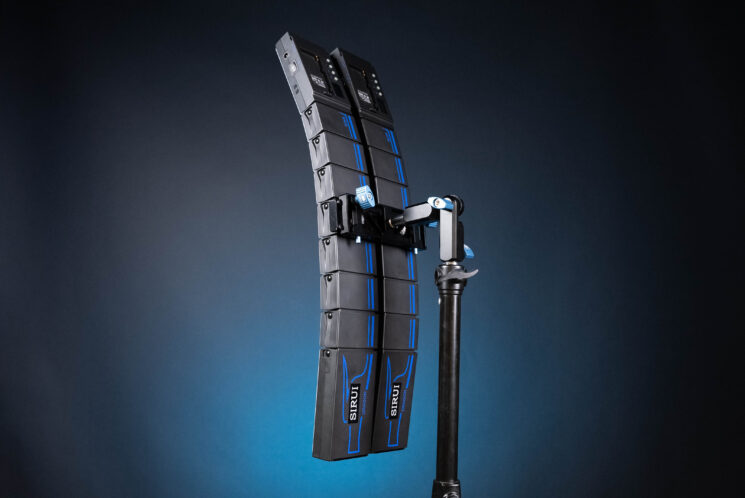 Side by side mounting

There are two ways to power the light: 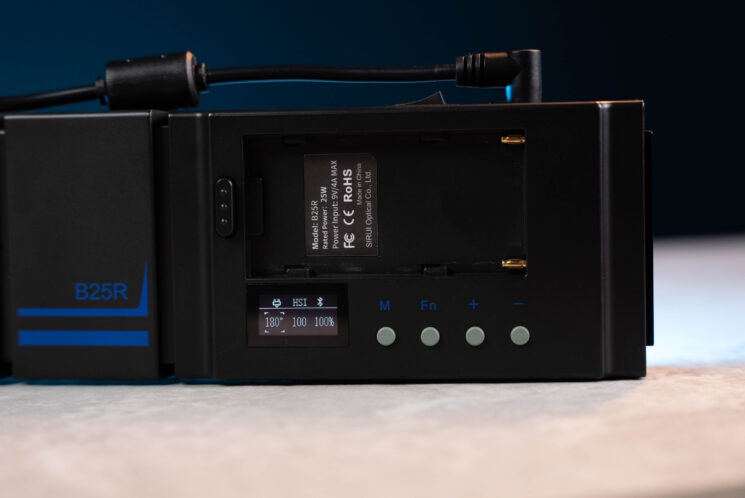 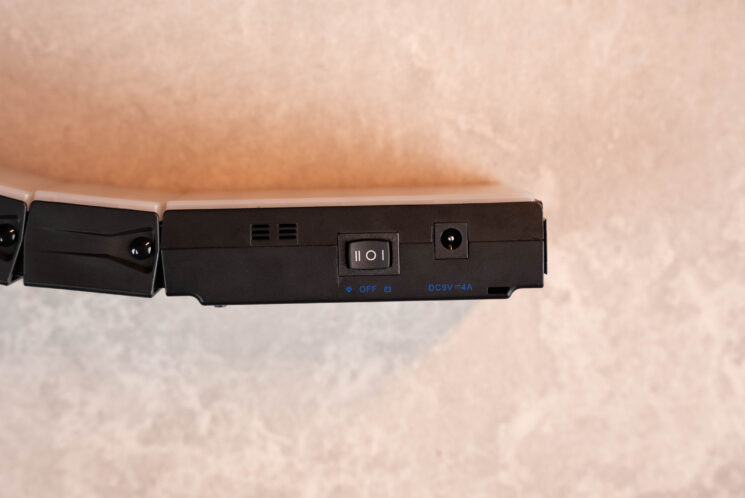 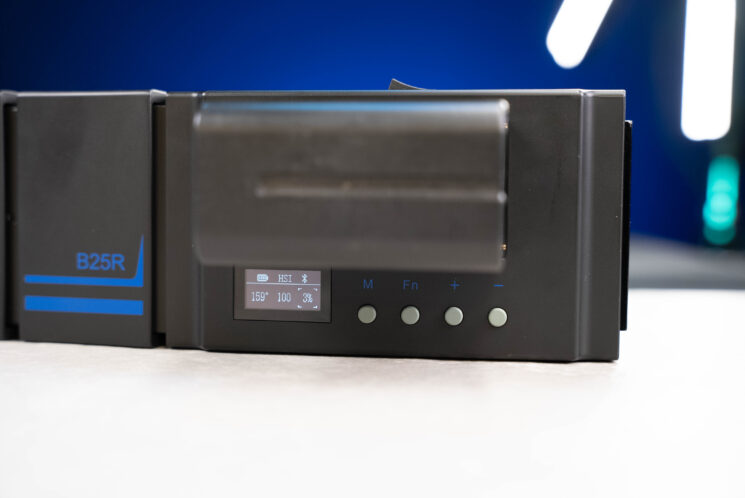 If you opt for the power brick, it comes with a 150 cm line which should be ok as long as you don’t mount the light too high. Unlike Spekular lights, which can also be combined, the power does not travel between sections

We did have some issues with the battery operation, though. Inserting and removing the battery was not smooth as we would like it to be. It required more “oomph” than we prefer. The other, bigger issue is that NPF batteries (or at least the few brands and sizes we tested) did not provide enough juice to push the light at full power, and the light turned off. This can get very frustrating very fast.

Regarding light quality, today’s environment is sensitive to several factors: Brightness, CRI value, color temperature accuracy, and green-magenta shift. Let’s look at each of those factors. I am going to put a table with our measurements at the end of the post.

In terms of CRI, we are quite happy with the results. We tested at 100%, 50%, and 25% of power across several temperatures. Out of all the tests, CRI slightly dropped below 95 for low brightness at 3,200 Kelvins. This is definitely good enough for any shooting scenario I can think of.

The color temperature was spot on. Aside from the extreme edges, the delta between measured CCT and actual CCT was typically very low, at least not to the point you would notice, and definitely on par with other LED lights in this range.

For brightness, please look at the table at the end of the post and gauge for yourself if it is enough for you. The Dragon light is rated at around 25 Watts, which is quite a bit of light. It is also competitive when you look at Watts per dollar. The Amaran F7, another panel, outputs about 15 watts and costs $98. Both the lights are at about a similar watt/dollar ratio, with the Dragon being a bit more expensive per watt. As far as usage goes, the Dragon Light will not compete with the sun, but it’s more than enough at close range in controlled environments.

I was not able to measure the green-magenta shift. I can say, though, that there is a setting where you can fine-tune the light to match other lights. If this is something that matters to you, you should know that it is controllable, but I did not have the tools to measure its accuracy.

There are two ways to control the light: a set of four buttons or an app. The control scheme is very similar to other RGBWW lights. It also has the same set of features as you would expect from a video light in 2022. You can set the light via several modes: RGB, HSI, CCT, and Effects. For each mode, you see the submenu and can control the specific parameters. If you have physical access to the light, this is a very convenient and initiative way to control it.

One thing that I wish the controls supported is controlling several connected lights from a single unit. (In a similar way to the Spekular lights). Sadly, the connection between several units is mechanical only.

The other way is via an app. We had access to a pre-release app. It disconnected every once in a while and was not feature-complete. We did see a fair amount of issues with getting data from the light, controlling several lights, and so on. If I take the bugs out of the equation, the app has everything you would expect, including access to all the controls you have in the physical menus, grouping lights, and so on.

We used the light in several shoots and tests, and this is what we found out. The light bends, and this is definitely a great feature. Whether this is useful for you depends on your needs and the specific setups you shoot. For some, bendability is a lifesaver; for others, it has very little impact. 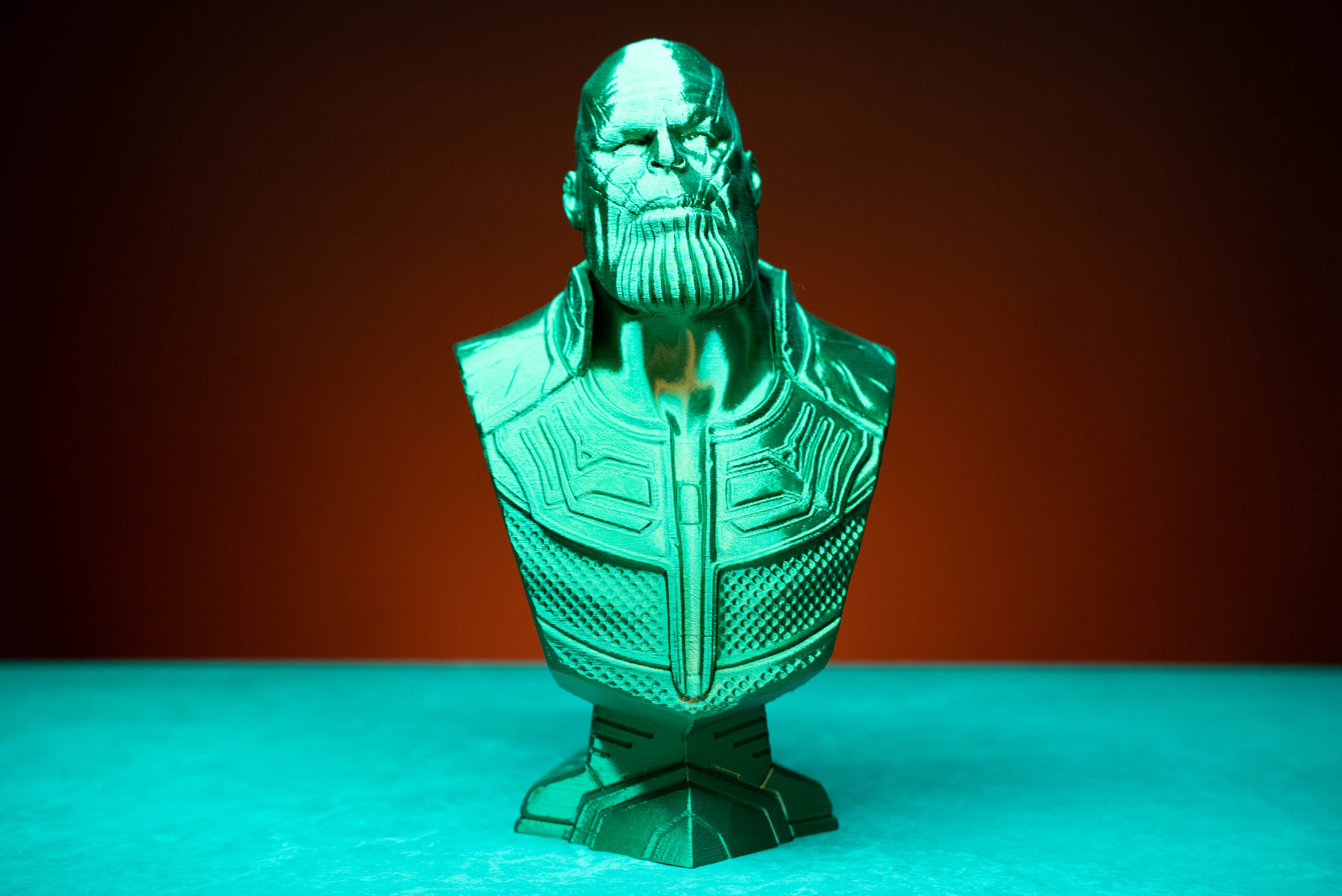 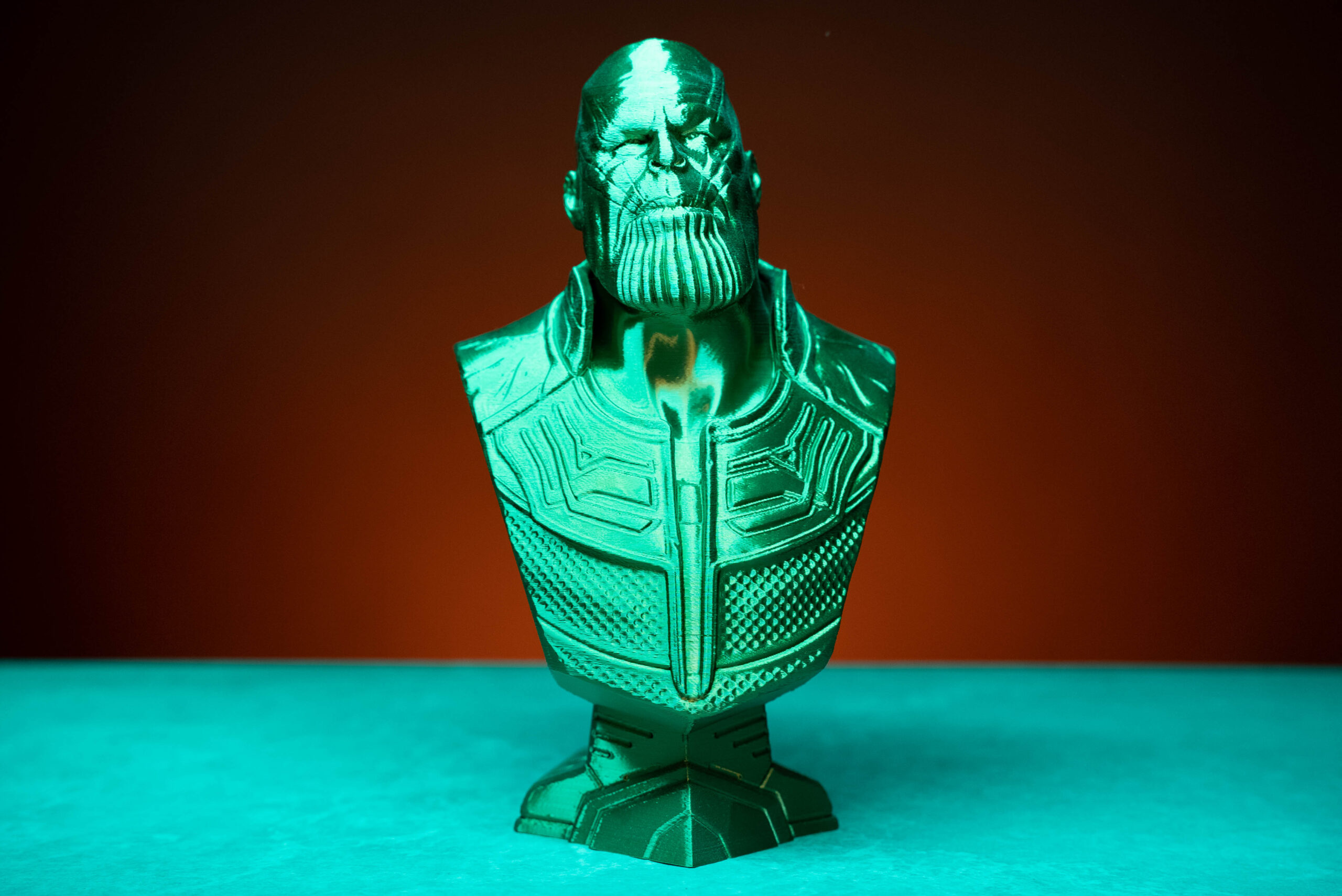 That said, being a bendable light can work magic as a practical light. 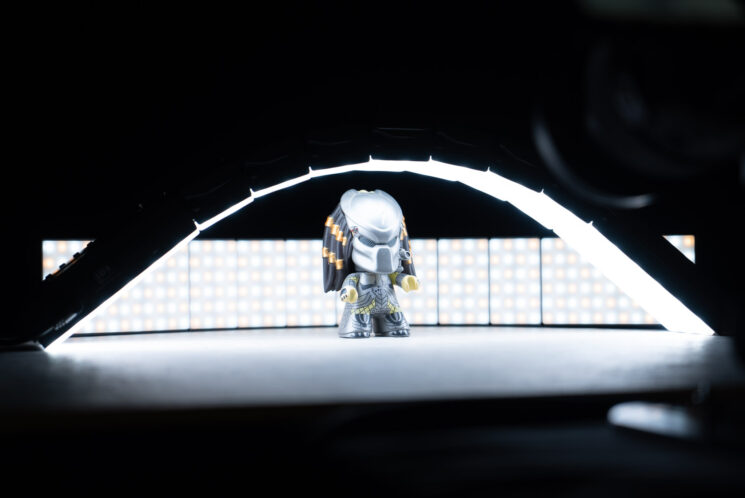 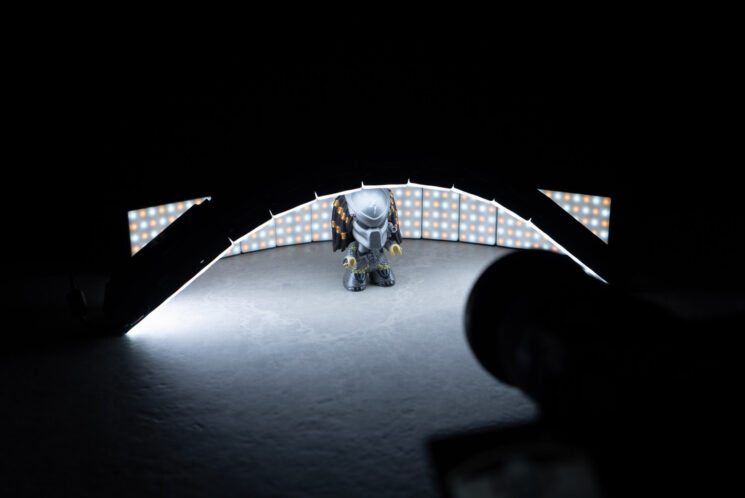 But even without taking bendability into consideration, it performs incredibly well as a strip. The fact that you can connect two lights into a long strip or a fat panel is valuable on its own. And the Sirui quality shows on the brackets and accessories.

Here are some more images to illustrate how the light performs. 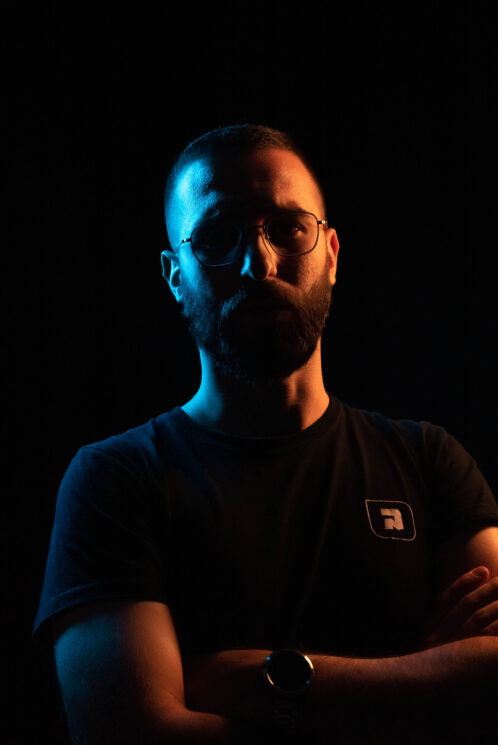 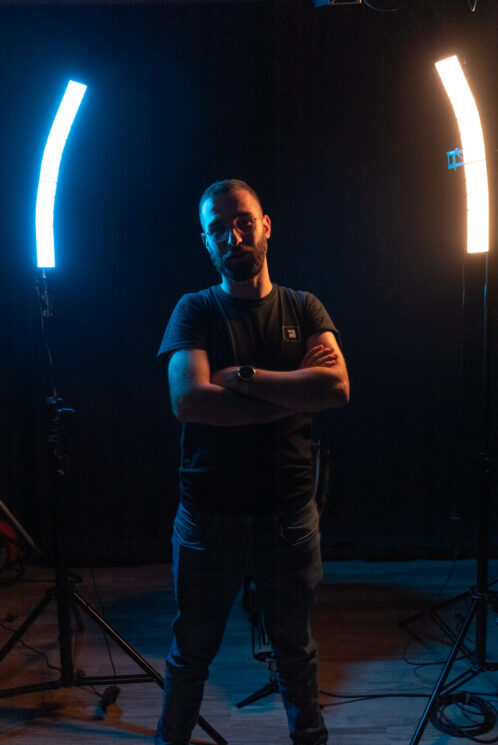 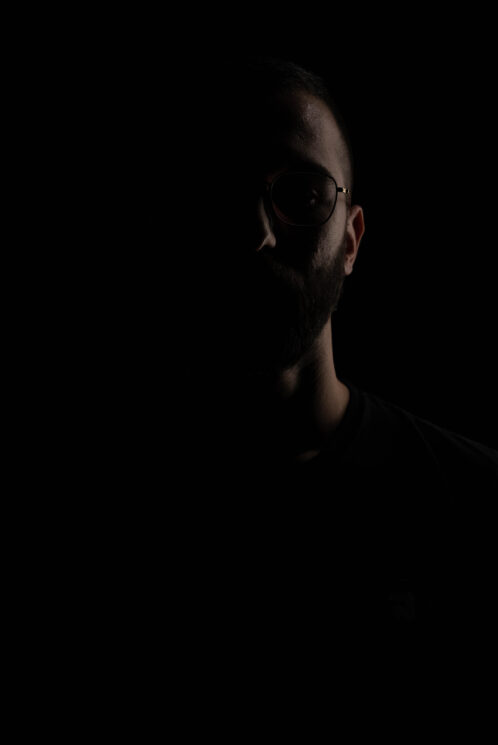 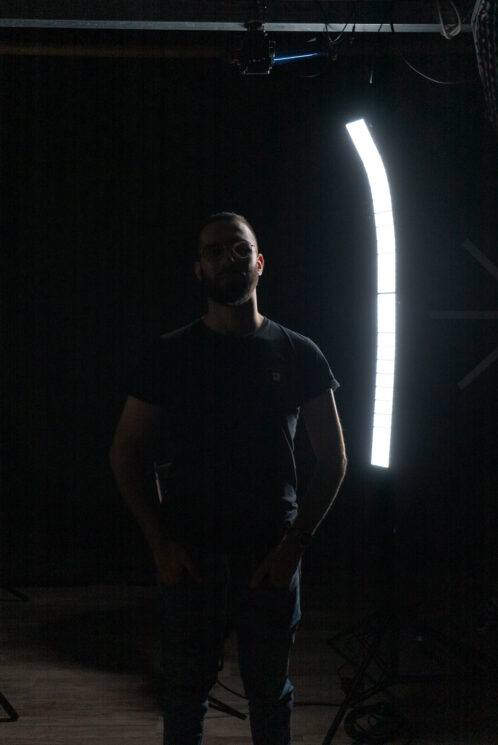 The Sirui Bendable LED Dragon Light brings something new to the market. It’s great to see that companies are innovating in this very saturated market. As an LED panel, the Dragon performs exceptionally well. It is soft, has a distinct light signature, and has a form factor that can work in many shoots. Taking this into consideration, the Dragon is already a good light and quite affordable for what it is. If you need the added bendability, buying this light becomes a no-brainer.

If you care about the specifics here, here are our test results from measuring the light with a spectrometer: