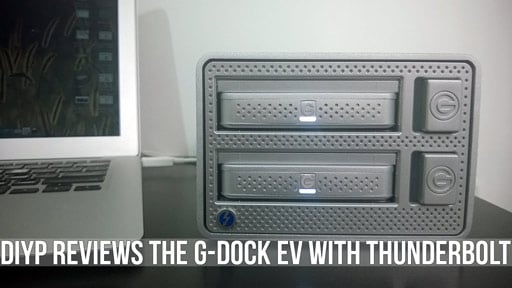 G-technology is no stranger to mass storage. The company is leading the market when it come to high performance storage for creative people. The G-Dock ev with Thunderbolt is one of those storage devices. It’s has everything you’d expect from a device aimed at creative professionals and also those who see themselves as such; It’s extremely well built, looks “pro” and works as it should – fantastically. (I guess you can tell where this review is going to go… we love it!)

“One last thing” (Before we even begin)

As with many Thunderbolt products, The G-dock ev is aimed at Mac users. Lately Thunderbolt is moving forward and now available on some high performance Windows desktops. While you can use any of the supplied 1GB G-Drives ev individually on a Windows machine, the experience is very limited as the drives need to be formatted as FAT32 and thus limited to smaller single files, and you don’t get to enjoy the faster RAID 0 configuration.

I think G-technology will do smart if they’ll find the way to allow Windows users to enjoy this great product as well. 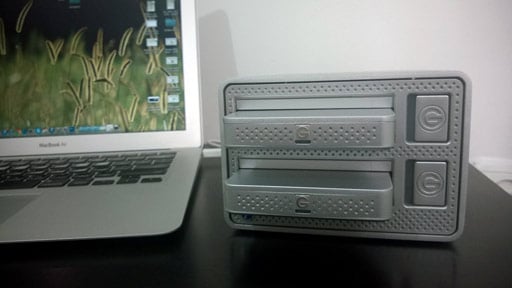 The G-Dock ev with Thunderbolt

The G-Dock ev dual-hard drive bay ships with two SATA-3 1TB 7200-rpm hard drives (e.g. the G-Drive ev), G-Technology sales the product as a solution for media professionals who need to have a their storage available, both at their workplace and out on the field, and with that statement in mind, G-Technology managed very well. The G-Drives can be formatted to RAID 0 or RAID 1 or JBOD (Just a Bunch Of disks) configurations, depending on your preference. 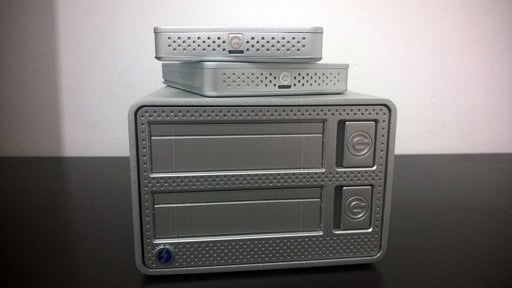 Both the dock and the drives are sleek and elegant and made of heavy-duty aluminum. The built quality is incredible, and when sitting right next to put-your-Mac-model-here it feel right at home. Hard drives carrying your very important one-of-a-kind information usually carry along some heavy emotional and psychological stress on the user’s side, and both the Dock and the drives are amazingly sturdy and help reduce the stress (at least psychologically) when moved around and used. 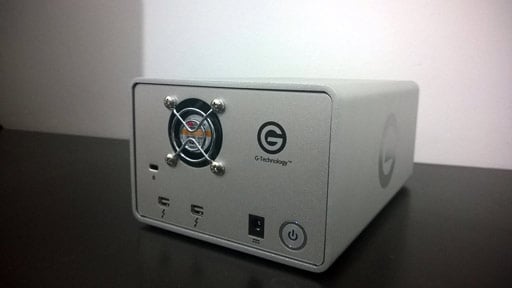 There are two minor design flows that I want to address: one is the SATA connector cap on the back of each drive, which is easy to lose (Not a big deal, but annoying). And the other is the fact that the two G-Drives are hard to distinguish, especially if you’ll end up owning more than a pair configured as RAID 0. (I used the colored sticker dots method, Blue set, Red set) 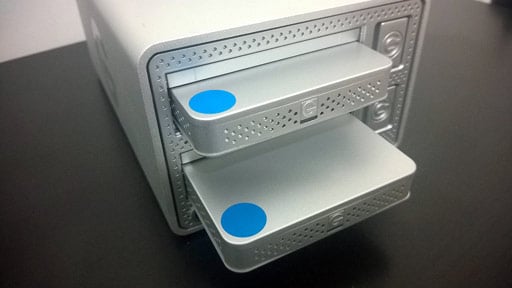 The short answer – Everything you need!

You get the docking station, two 1 TB portable drives (7200rpm), the external power supply (universal worldwide) for the docking station, one white Thunderbolt cable and two (also white) USB 3 cables. A simple setup sheet describing how to install the software and hardware.

Note: The Thunderbolt cable is short, almost like G-technology assumed you are already running another Thunderbolt device and you’ll use the supplied cable as a bridge cable. If you’re not, don’t worry, the cable is long enough if you’re running an iMac or a Macbook Pro connected to an external monitor. If you have a Mac Pro (not the tiny new one, but the kind usually located on the floor below the desk) you might want to get a longer Thunderbolt cable. 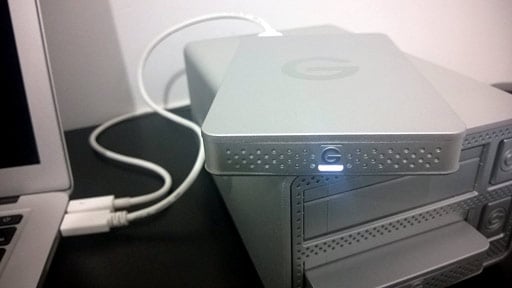 Build for speed… but not only

As I mentioned before, The G-Dock ev claims to be a solution for media professionals both at their workplace and out on the field.

Trying to dominate both worlds is not an easy task, and G-technology had to make some sacrifice.

Both on paper and in my tests, numbers are great and since this is not the first review on the web, and the system is out there for some time now, I’ll be quick.

To set the records straight, I’m testing the speed on a 2013 Macbook Air using both the AJA system test app. and the Blackmagic Disk speed app.

You should always look at real life implementations. Compared to the average USB 3 drives out there, the solo results are fantastic. Comparing the RAID 0 results is harder, as there aren’t many products like the G-Dock ev out there.

If you’re like me and you work with high quality video files, you can easily use the RAID 0 configuration to work with about 2-4 1080p ProRes 422 streams without a hiccup. For higher resolutions or a heavier work flow you might want to try G-Technology’s other RAID products (Such as the G-Speed es Pro that on paper can reach 640MB/s).

Personally, I carry the G-Dock and the drives with me when I go out shooting with my BMCC. I only have one 256GB SSD, and that gives me about 30min of RAW shooting, and that’s never enough. With the G-Dock, I can unload the SSD to my Mac – on site – about 4 times, giving me a more reasonable 2 hours of rushes (Dailies/Footage).

Sadly, an invertible sacrifice is the fact that you can’t use the G-Drives as a separate stand alone USB3 drives when using RAID 0 or Raid 1 as this will break the RAID configuration.

With great speeds, design, durability, and a good $750 price tag, the G-Dock ev with Thunderbolt is a good investment, especially given the fact that you can always buy more G-Drives ev for about $199 for a 1GB module.

Should you get one?

Well, it’s kinda up to you. If you’re in the market for a RAID drive, and you liked what you read, the G-Dock ev with Thunderbolt is definitely worth the regular price tag. If you still looking for a good excuse or that extra something, you might want to take advantage of G-Technology’s special offer ending March. 28th 2014, giving you an extra 2 G-Drives ev for the same price.

Are control consoles the future of photo editing? DIYP reviews the Loupedeck+
« This Battery Recycling Tip Can Save Your Home (And Possibly Your Life)
Improving A Samyang 800mm With A Tuning Key And Some Cardboard »