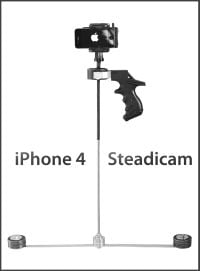 I know the iPhone cannot stand in for the Scarlet or Epic cameras, it will probably not even use the full power of your SLR lenses. However more and more hobbyists are using the iPhone at the always around camera (kinda similar to what happen to smart phone still cameras).

That said, it is no surprise that amateur photographer push the iPhone camera to its limits, or just find ways to add “pro” gizmos to the very low grade cam. After the video camera 2c iPhone dolly, more mods are popping up. This next mod by Spencer S. Watson based in Portland, is a great one if you wanna shoot smooth videos with your iPhone. It is an iPhone Steadicam (we covered a few of those here).

The cool thing about this Steadicam, apart from being 100% DIY is that it uses not much more than a few Homedepot parts and a bearing. It gets better there is a video tutorial. The tutorial is next, followed by a skateboarding demo (tada! skate board parts both behind and in front of the camera).

UPDATE: looks like a similar design, for video cameras is out in the wild for a long time now, the Steadicam by yb2normal. Some vids, tuts and step-by-step here. (thanks for the shout, David)

Read the original post at Spencer’s blog. Got more iPhone video hacks? Hit us in the comments!

How To Build A $30 DIY Steadicam

How To Build And Balance A $30 DIY Steadicam