The following article was contributed by Avner Richard, not only a great photgrapher, but also an electronic wizard.

Studio strobes are quite expensive, especially when dealing with high power strobes, or multiple heads – the power pack solution.
In this article I’ll present my strobe power pack project, which is an easy DIY electric project.

The first thing you will need is a xenon tube. Several types and models of flash (xenon) tubes exist on the market. Mostly, for a high power studio flash project, like this one, you’d want to get a round flash tube which is thick in diameter, and has a high power rating of some hundreds of watts-second (W/S) which is the same as Joules. If you need Flashtubes, Xenon Flash Tubes or other parts contact Avner via www.photoar.com 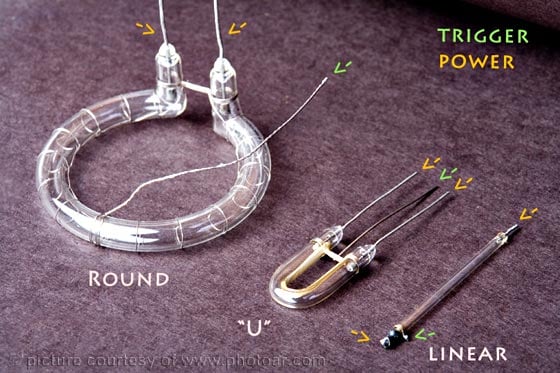 Now, lets have a look at the circuit schematic, and understand how it works .(see schematics after the description) 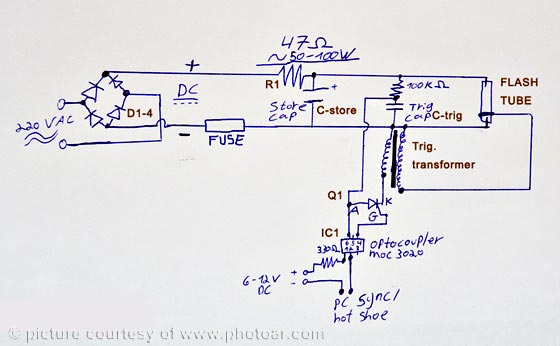 As you can see the circuit is not complicated, but might include components which are not yet familiar to you. Here is a list of the components along with descriptions:

Great idea:
Since power resistors are quite expensive, especially when reaching 75-100W values, and they will also need decent active cooling to avoid overheating, You’d want to try somthing creatinve.
A definitely creative solution will be to use standard cheap lightbulbs!! Lightbulbs are resistors, which make light, and are EXTREMELY cheap. The only thing you have to worry about is the impedance. Grab some lightbulbs and an Ohm-meter, and measure the bulb’s impedance. It should read around 30-50 Ohm, which is ideal as rating.
If you experience long recycling times, you may ADD lightbulbs to your circuit, in PARALLEL to the first bulb. The more bulbs the more powerful the unit can be (if you build a 100W/s unit, a bulb or two will do the job). Now, here is a nice trick – consider the option of using halogen bulbs! rated at 500W, they have an impedance of 10-20 Ohms, which will shorten even more the recycling time. The best thing about these bulbs is the low cost. Moreover – light bulbs are DESIGNED to stand high temperatures without any cooling. In this project the lightbulbs won’t be on constantly. The bulb will illuminate just after firing the flash, during the recycle time, then will fade out until next flash is fired. – not exactly model light, but still nice. 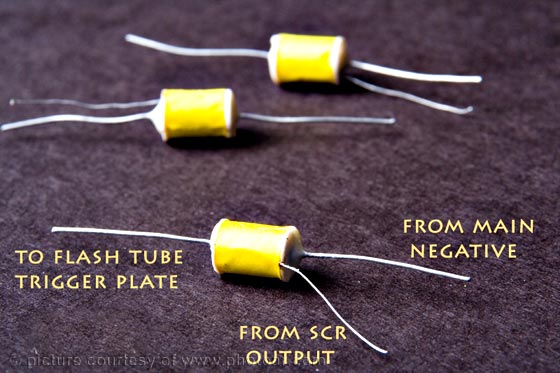 That’s it ! your work is completed !

Now that your basic flash unit is working, you can go on and see some variation on the home made flash (it has cool flavors of the flash unit: ring light, beauty dish, soft box and more). Combined with the homemade backdrop and the DIY reflector stand you can come up with a very low budget studio.

This project is dealing with high voltage circuitry. Please be extremely careful and stick to the given schematics!
Charged capacitors can still have juice after hours, days, and even weeks; never touch capacitors terminals unless you are sure it is fully discharged.
Never work on a circuitry while it is connected to the mains power !!!
Never work on a circuitry while its capacitors are still charged. Be sure to discharge them fully.
Neither the writer nor the publisher of this article are responsible to any damage caused by attempts to reproduce this project. This project was made for 200V voltage, for other curents, adjustments have to be made.
You are the only responsible to your equipment and life. don’t drink and weld.