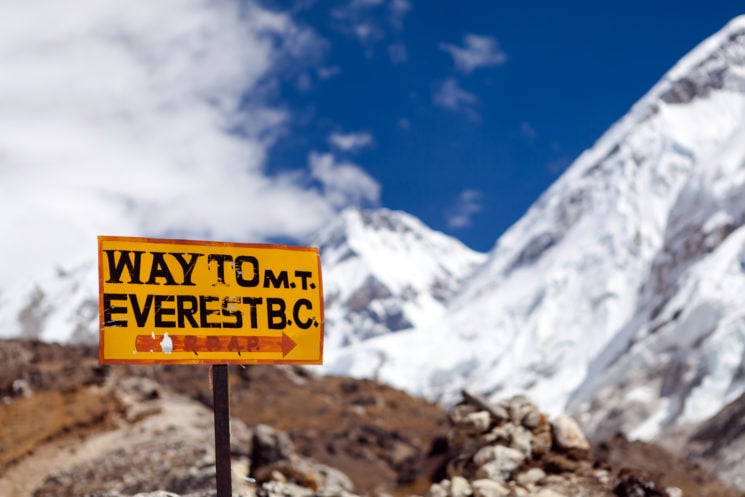 Two mountaineers faked a Mount Everest climb and submitted a photoshopped image to “prove” they did it. But instead of winning an award, the scam earned them a 10-year ban from climbing any Nepalese mountain.

Narender Singh Yadav and Seema Rani Goswami from India claimed they had reached the top in 2016. They said that they were a part of a 15-person group of climbers and even submitted photos to the Nepalese Department of Tourism to confirm their climb. However, something was fishy.

First of all, other mountaineers claimed that the couple hadn’t reached the summit, and one of the Sherpas confirmed it. After carefully examining the submitted images, experienced mountaineers spotted some rookie mistakes: an oxygen mask wasn’t connected to the tank and there was no reflection of snow in the glasses. Also, the flags in the image were limp, which would be impossible in the area known for lacerating winds.

Hindustan Times posted one of the photos, and I think you don’t have to be a Photoshop master to figure out that it’s completely off:

After a government investigation, it was confirmed that the photos were fake, just like Yadav’s and Goswami’s climb. According to The New York Times, the authorities in Nepal are now seeking to ban the duo not only from climbing Mount Everest, but also other Nepalese peaks for 10 years.

When I first read this story, I thought it sounded familiar. And it did because this happened before. Believe it or not, there have been more and more people faking the Everest climb. According to The New York Times, the number of people who do it has skyrocketed: “from a few a decade ago to dozens every year,” this source writes.

It got me thinking: what’s the point? Why do people do this? Is it the popularity, the Instagram likes, the 15 minutes of fame? There’s all of this, but also various perks and benefits. According to The New York Times, India often gives national awards to those who manage to climb the world’s highest mountain. “If they are already working for the government, they are sometimes given promotions and lifelong benefits,” this source writes.

So I guess the logic of these “fake climbers” is “fake it till you make it.” But if you get caught, you can lose a lot more than you would have gained.

« These elegant playing cards were inspired by photography
Photoshop has a new AI “colorize” filter but is it really any good? »