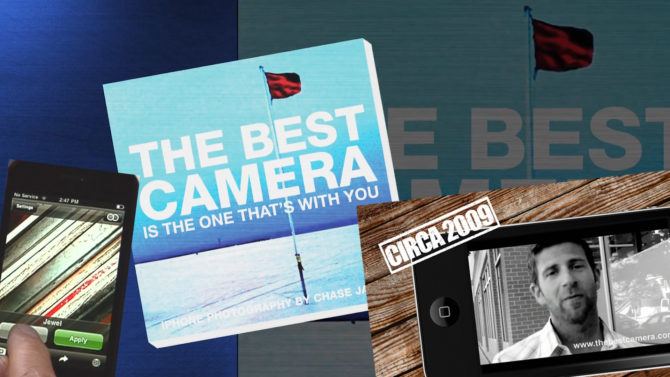 For those that haven’t heard the name Chase Jarvis, he’s basically the guy who kicked off the whole mobile photography thing, amongst other accolades. In 2009, Chase released a book called The Best Camera Is The One That’s With You. It’s interesting viewing, filled with images shot using early iPhones. Alongside the book was an accompanying iPhone app called Best Camera, Macworld’s best camera app of 2009.

It was the first major social push sending the message that “the gear doesn’t matter”. That photography is all about the image, the story. The app also had a thriving online community where users shared their images to the world. It was essentially the original Instagram, over a year before Instagram came out. Then, the app seemed to disappear from the public consciousness.

What happened? In this video Chase Jarvis finally opens up on Best Camera, and why he’s finally joining Instagram.

When it was first released, and for the months that followed, it seemed like nothing could stop Best Camera. It was wildly popular, far more than anybody could have ever imagined at the time. It had a community of over a million people (tiny by today’s standards, but ridiculously huge at the time). It sparked a whole generation of people to start taking their camera’s phone more seriously.

But then updates came less frequently, offered simple fixes rather than new features, and then stopped altogether. Best Camera seemed to be dying completely. Users were in the dark, with no clue what was going on. Questions remained very unanswered. Some started to make the transition over to Instagram. Facebook itself became more of an image sharing platform, and a few others came and went.

When you watch the video, it’s understandable why Chase stayed silent on the issue. Despite owning all the intellectual property for Best Camera, the developers essentially held it hostage. Lawyers had to get involved, and they advised he keep quiet and stay away from other online image sharing platforms (like Instagram).

Facebook acquired Instagram for the eye-popping price of $1 billion. It was a big story, with headlines all over not just the tech press but mainstream outlets like CNN, Newsweek and the nightly news– who could have imagined a company with barely over a dozen employees commanding a 10-figure valuation?!

My amazement was tempered with shame and regret, because in a not-so-different world, it would have been my company in the headlines. My phone was blowing up and I did my best to patiently answer the barrage of emails, texts, and calls (Yes, I saw the news about Instagram and yes, I know it could have been us).

I laughed it off, but it stung in way that took me a few months to reconcile.

Long story short, it boiled down to the revenue split between Chase and the developers of the app. After hitting a certain level of income, the profit sharing ratio shifted away from their favour. At the time, they simply felt that apps didn’t have any kind of real longevity (oh boy, were they wrong!). Now that they had seen their investment more than returned, and their share of future income cut, they weren’t really all that motivated to keep working on it.

But, they had all the code. Chase owned it, but he didn’t have it, so could do nothing with it. Hence, it petered out and died, never go be spoken of again. Until now.

Chase now finally has his code, and while he’s not going to do anything with Best Camera going forward, he did learn a lot of valuable lessons. These lessons have allowed him to make Creative Live as successful as it is, and no doubt many other ventures, too.

Watch the video above, if you haven’t already, then head on over to Chase’s site to see the more complete story. It may be a bit of a long read, but it’s worth it. There’s lessons that all of us may be able to learn.

Now that the whole debacle is over, Chase has also finally joined Instagram. You can find him over @ChaseJarvis. At the moment, there is but a single post. I’m sure it won’t take long for that to change.

It’s a shame that Best Camera will not be resurrected. I have to admit, given some of the complaints about Instagram, it would be interesting to see what a competitor in the field could do today. Especially somebody with Chase’s vision and outlook.

Were you part of the Best Camera community? Do you have the book? Do you think it could’ve beaten out Instagram if the developers had stuck with it? If Chase changed his mind and Best Camera did make a comeback, would you leave Instagram for it? Let us know your thoughts in the comments.