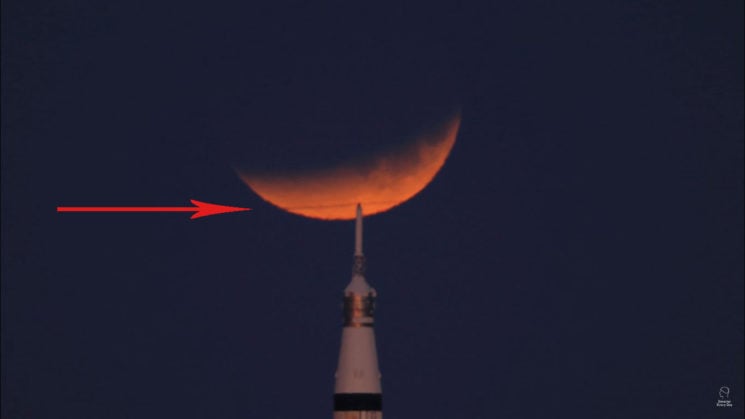 The photos of Super Blue Blood Moon have been all over the internet in the past couple of days. Destin Sandlin from Smarter Every Day took some shots too, and he captured a phenomenon that got him utterly confused.

Destin and his friend Trevor Mahlmann shot the moon aligned with Saturn 5 rocket in Alabama, USA. As the tip of the rocket and the moon got aligned, a dark line appeared, and it stayed in line with the rocket’s tip all along. Destin has a great knowledge of both astronomy and photography, but this phenomenon got him so confused that he turned to the community for help. Can you tell what this line is?

First of all, I’m amazed by the amount of preparation and calculations Destin and Trevor invested into these shots. They did the math and used a drone to figure out how high they need to be in order to see the moon and the rocket. Destin even called the people from the US Space and Rocket Center to ask them to turn on the rocket lights, so that the rocket is illuminated enough in the shots. Finally, Destin rented a 60-foot boom lift for him and Trevor to get them up high so they can shoot. That’s what I call devotion.

It’s good to know that all this effort paid off and they got some splendid shots. However, as soon as the moon aligned with the tip of the rocket, the black line appeared in the shots. Despite Destin’s knowledge of astronomy, photography and various optical phenomena, this one got him pretty puzzled. He and Trevor noticed it while shooting, and Destin writes that it happened on all three cameras they used:

It happened on all 3 cameras, but only from one of our 2 shooting locations. We were approximately 2.2 miles away.

Destin adds that he was shooting with a 300mm lens on a Canon 70D and a 100mm lens on a Panasonic GH5.  Trevor shot with a Canon7D MkII and also spotted the phenomenon through his viewfinder and later in his images.

Eager to find out what this strange line was, Destin has turned to YouTube, seeking help from the community. Some of the comments suggest that there may be a problem with the optics or sensors, or that the line may be a result of the refraction caused by the rocket’s tip. In addition to serious answers, there are also some hilarious ones. A couple of YouTube and Reddit users joke that it’s a shadow from the Earth, referring to the theory that the Earth is flat.

Personally, I don’t have the slightest idea what this line could be, but it’s definitely a perplexing question. Do you have any guesses? Share them in the comments below.

[WHAT IS THIS LINE? (on my Super Blue Blood Moon Photo) – Smarter Every Day 188 via PetaPixel, Reddit]

From bugs to poison: the weird history of fake blood