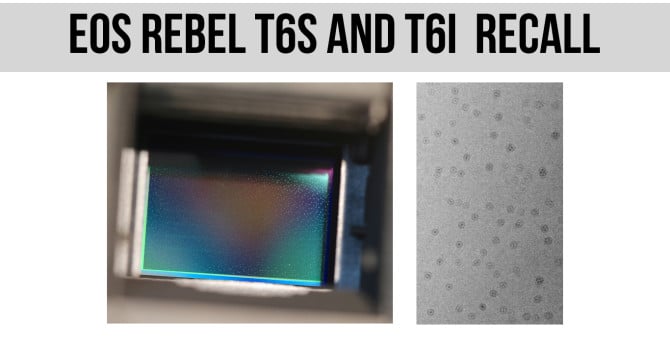 Looks like Canon is about to pull a D600 with their latest EOS Rebel T6s and T6i Cameras.

About 10 days ago Roger of Lens rental shared a post where he found a big batch of Canon T6s’s and T6i’s to have a weird pattern on one of the glasses on their sensors:

The bottom line is that 4 of the Canon T6s and 2 of the T6i cameras we received had to be sent back because of a defect in the sensor stack (the layers of filter glass over the sensor). This is out about 10 copies of each; the others were absolutely perfect

Now Canon issued an advisory that acknowledges the issue, explains how to detect if a camera is of a bad batch and instructions on how to approach support for a free repair:

Here is an excerpt from the advisory:

Phenomenon
In some units of the models listed below, the following phenomenon may occur due to irregularities on an optical layer located in front of the image sensor:

White spots may exist on the optical layer which may result in the appearance of dark circular patterns on the captured image under certain shooting conditions.

Affected Products
The phenomenon described above may occur in cameras whose first and second digits of the serial number are as set forth below.

NOTE: If the battery cover contains the marking illustrated below, the camera is NOT affected by the phenomenon described above even if the first and second digits of the serial number are of the numbers mentioned above.

First is a concern (though it is just a thought in my head and has absolutely no conformation). The fact that Canon has a mark for OK cameras may indicate that they were aware of the issue before LensRentals made it public and chose to try and address it on a unit-by-unit base. So you would never be aware of the issue unless you contacted Canon for support.

The second one is a KUDOS for owning up to it once it became public and offering a free repair and guidance.

I wish there were only the second item.

All that said, if you live in the US or Puerto Rico you are in luck, other territories has no such clear guidance and you would have to contact your local Canon dealer.