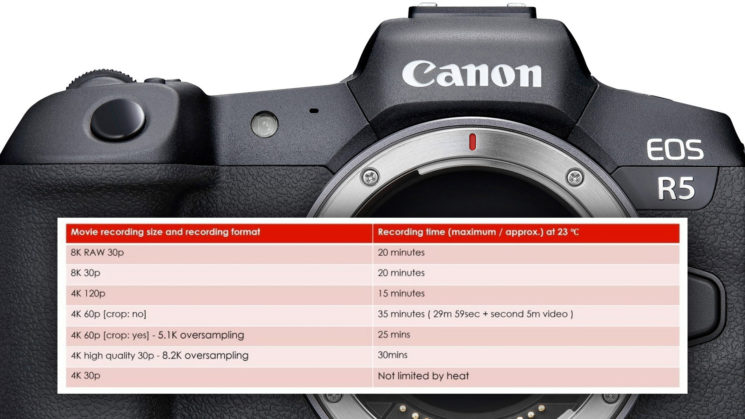 There’s been a lot of chatter and speculation lately about the potential overheating issues with the new Canon EOS R5. Given that very few people even have one in their hands, it’s difficult to know for sure exactly how it will perform in the real world, although Canon has now confirmed the times mentioned in Max Yurev’s video, and also extended the table to include other shooting modes.

While some of the overheating modes had already been released, there were still questions to be answered. The biggie that most people wanted to know was how well does it handle 4K 120fps footage and how long can you keep shooting it for? Well, Canon has now answered.

Pro gear specialists and retailer CVP was sent a table of overheat times by Canon. CVP’s tech advisor, Jake Ratcliffe then posted this to Twitter for the rest of us to see. The table does indeed confirm that the EOS R5 shuts down after 20 minutes when shooting 8K video, regardless of whether it’s RAW video or not. But the table also reveals details about the EOS R5’s other modes and their respective time limits.

This is a new table that Canon provided today. I should be getting another shooting unit on the 15th. Overheating tests are on my list! pic.twitter.com/Ja4zEvyiTM

According to the list, this is how the EOS R5 currently stands up in different resolutions and frame rates, according to the official word from Canon.

This actually doesn’t sound that terrible at all, really. It’s unlikely that most people will need more than 4K 30fps for their general use, and even the “high quality” 8.2K oversampled mode isn’t too terrible at 30 minutes, depending on how long you have to leave it to cool down before you can shoot at that format again – something that wasn’t included in the table, although was briefly touched on for some modes before.

4K 120fps footage does initially sound quite shocking, though, at only 15 minutes. But then, how often are you really going to shoot 4K 120 for long periods of time? Slowing down 120fps footage to 24fps means it’s playing back at a fifth of regular speed. Your 15-minute file now takes an hour and fifteen minutes to play back.

The main issue, I suppose, would come if you’re regularly bouncing between 4K30 for your main shots and then 4K120 for your sexy slow-mo b-roll shots. Until it starts getting into more peoples hands and we can see what kind of an impact this has in the real world, it’s difficult to know how much of an issue it will really become. But it might mean that some of you will have to plan out which segments you’re going to shoot in what order in order to minimise camera downtime due to overheating.

And for those who are shooting long events or weddings where you need to record continuously, then you still have regular 4K 30p that can go on until your batteries die. Or, you can just buy a different camera.

« Please, don’t dangle your kids over a cliff for a photo!
Photographer creates emotional underwater portraits that look like paintings [mildly NSFW] »