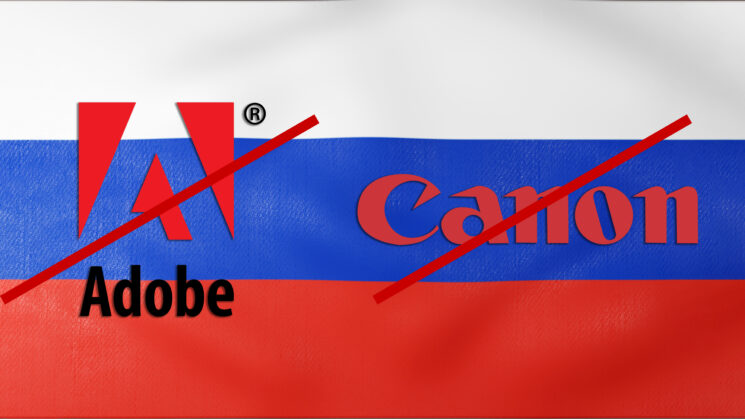 As a response to its attack on Ukraine, the USA, the EU, and the UK have imposed sanctions on Russia. Lots of companies and businesses have joined this, Adobe and Canon being among them.

Adobe has recently stopped all new sales in Russia, disabling anyone based in this country to buy any of the company’s software. This was followed by Canon’s decision to stop delivering all of its products to this country, too.

In a statement published on 3 March, Adobe writes that it had taken steps to ensure the health and safety of [their] employees and provide humanitarian aid to Ukraine. “As we see this tragedy unfold, we believe we have a responsibility to ensure our products and services are not used in support of this unlawful war,” the company writes. “Effective immediately, Adobe will halt all new sales of Adobe products and services in Russia.” What’s more, Russian government-controlled media outlets won’t be able to access Adobe Creative Cloud, Adobe Document Cloud, and Adobe Experience Cloud, the company notes.

“We understand there is only so much one company can do to impact an unjustified invasion. But we also understand our civic and moral responsibility to support democracy and humanity. We are committed to doing everything we can to stand in support of those directly affected and with our entire Adobe community.”

A day later, Canon has issued a shorter statement, but it was written in a similar tone. “As of earlier this week, Canon EMEA suspended all product deliveries into Russia,” the statement reads. “We continue monitoring the fast-evolving situation and developments.”

Neither of the companies has noted how long their decision will stay effective. I believe that it’s safe to assume that it will last as long as the rest of the sanctions do. A bunch of other companies supported sanctions too, canceling the sales of its products in Russia. Netflix, Epic Games, and PayPal are only some examples alongside Adobe and Canon. At the same time, Snapchat has temporarily disabled the Snap Map’s “heatmaps” in Ukraine as a safety precaution.

I have no plans of turning any of this into a political debate. But I do feel the need to say that I consider any war absolutely mindless. While politicians play games from their comfy chairs, it’s real people who suffer, lose their homes and get killed – on both sides. My country has been through a civil war, a NATO attack, and western sanctions – and I’ve lived through all of it in the first 11 years of my life. And I was among the lucky ones – my family has survived and my parents kept their home. So, all I will say is that I’m against this war, but also against any measures that will harm no one else but regular folks like you or me.

Close And Personal Photos From The Heart Of The Revolution In Kiev, Ukraine