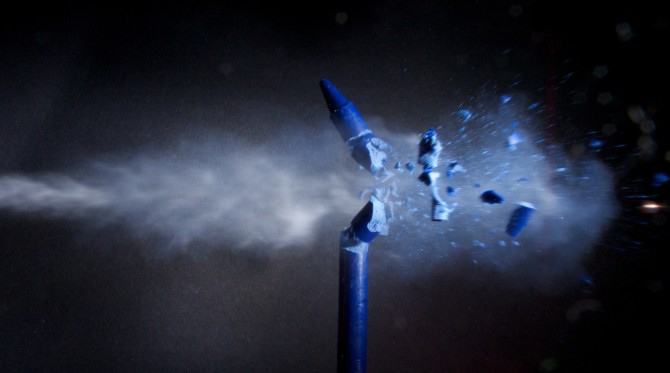 High speed photography has a tendency to be messy (broken glass, water and other flying debris) and potentially dangerous (guns, and that flying debris again). However it’s the need for darkness which can prove to be the biggest problem. Having built a high-speed laser trigger, I needed a way of actually using it to take some photos. This presented me with a puzzle, as I work in an open plan office and have small children at home. Neither lend themselves to blacked-out rooms, flying shards of glass and small arms. The solution I came up with manages to solve all of these problems and more, and is I think worth trying even by those who are lucky enough to have access to real studios.

My inspiration was the film changing bag, which is simply a light-proof bag with elasticated holes for arms. This is great for times when you need complete darkness but don’t have a darkroom, such as when you’re loading a film into a developing tank. Clearly a bag would be no use here, but perhaps a box would do. I looked at the large, black recycling boxes that we have around here and thought they may be on the right track. A quick search on Amazon for the largest black plastic box I could find turned up this 84 litre (22 gallon) beauty, complete with lid for £21 ($37). It sits comfortably on my desk, and is easily stored underneath it. 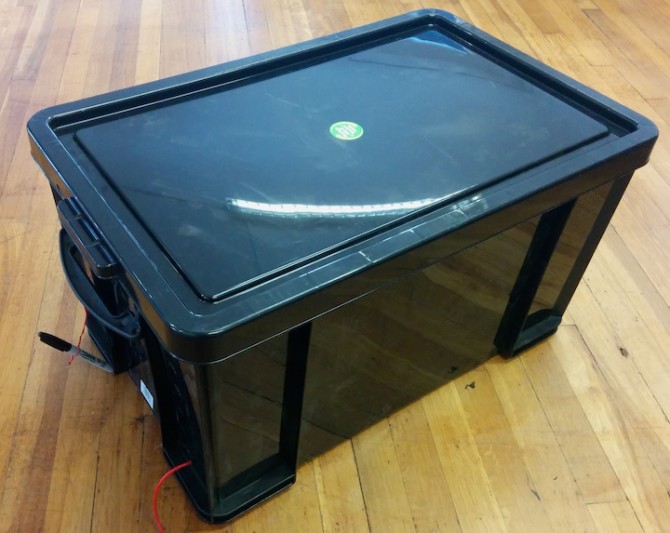 Unsurprisingly the biggest problem with trying to build a studio in a box not much larger than a picnic cooler is space. The box is around 70cm (2 foot 3) on its longest side, and 45cm wide. This doesn’t leave much room for camera, lighting and of course gun and backstop. I decided to use the longer axis of the box for the gun, with the camera in the middle.

This being Britain, a real handgun is out of the question, but a BB gun is fine for this. I’m using the Umarex TDP45 CO2 BB pistol. I’m holding it in a vacuum vice, which while it won’t hold suction very well on the base of the box, is nevertheless sturdy enough to hold it steady. My target backstop is an old O’Reilly programming book. The gun is upside-down so that I can reload it without removing it from the vice. I fire it by running a cable around the trigger and through a hole in the side of the box. 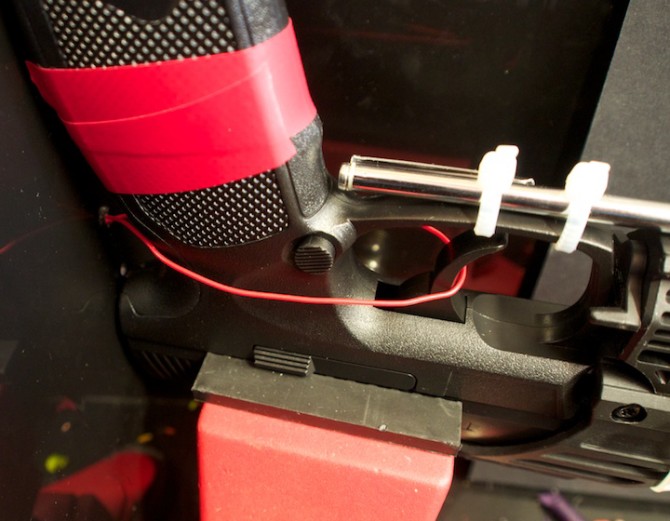 The red wire runs around the trigger and out through a hole in the box. The handle is a Sharpie. 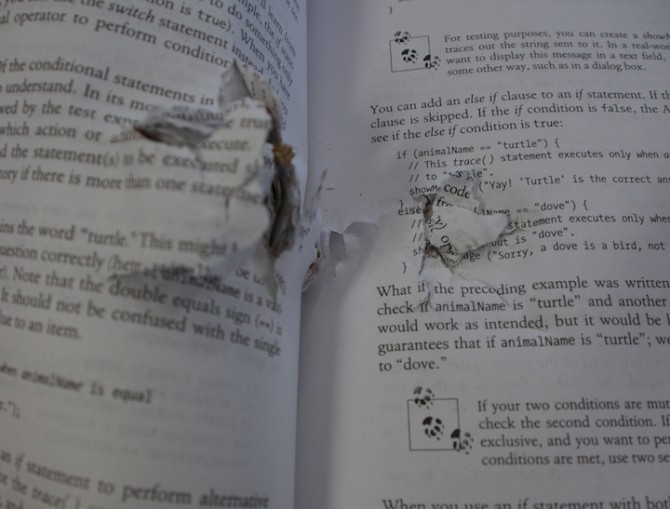 Sorry, Actionscript 3, but I don’t think I’ll be using you again any time soon.

After messing around with mini tripods for some time, I ended up just putting my OM-D E-M5 camera on a small wooden box. This was much more stable. The Yongnuo YN-560 flash is just out of the bullet’s path. I was shooting crayons, which I held with “helping hands” clips. 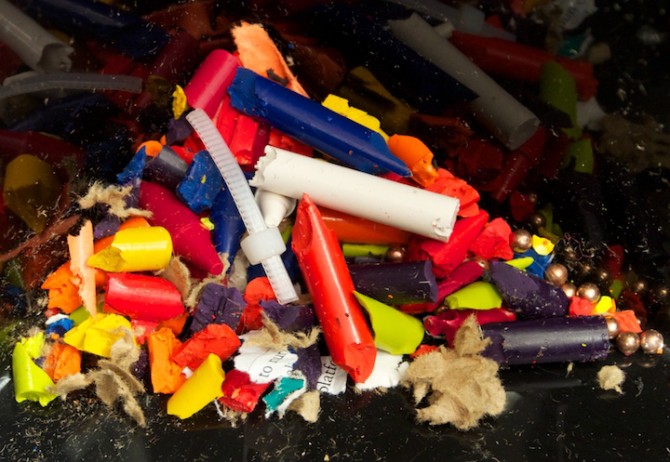 Cleanup is a lot easier than a real studio.

This is essentially macro photography, as we’re only a few centimeters from the subject. My first shots were with my Sigma Mini-Wide II 28mm, M42 mount with a Micro 4/3 adapter, which is great for macro. However the crop factor restricted my options and I wanted something a bit wider. I don’t have many M4/3 lenses, as I mostly prefer old manual glass with adapters. In the end I just went with the OM-D’s kit lens, as it’s the widest M4/3 lens I have. I stopped it right down to F22 to maximize the depth of field, which is particularly important with moving objects at these short ranges. I bumped up the ISO to 1000 to compensate. I set the flash to manual, and to its lowest power (1/128) as that gives the shortest flash duration. This is important to minimize the motion blur. The shutter was set to bulb, and triggered with Triggertrap Mobile. I ran the dongle cable through a hole drilled in the side of the box and plugged it into my phone, running Triggertrap on “Press and Lock” mode. 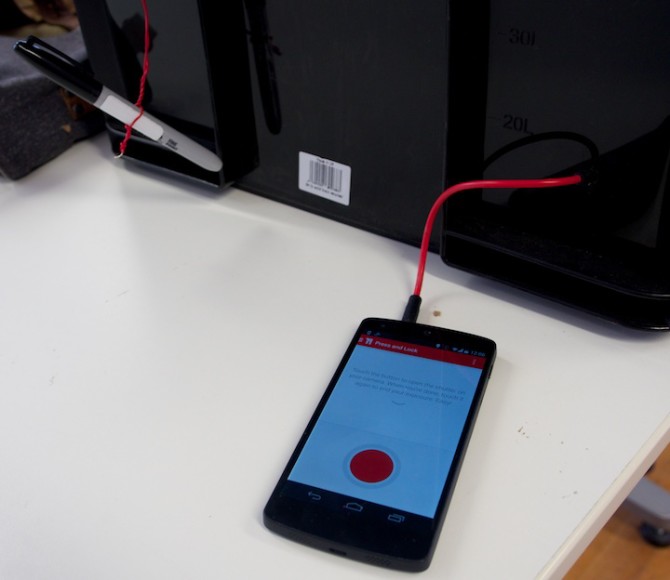 The flash is triggered with my homemade laser trigger. I put it into a box, with a hole over the phototransistor covered in Scotch tape as a diffuser to make it easier to align. You could more easily use something like Camera Axe, which has a dedicated projectile sensor, or Triggertrap Ada‘s laser trigger once it’s available. Both of these would give you more control over things like delays but are obviously a lot more expensive. I used a simple laser pointer for the beam. I placed the sensor on the floor of the box, and suspended the laser above. This vertical orientation of the broken beam is great at minimizing the visibility of the laser in a small space like this. The backdrop is black card, taped to the side of the box. 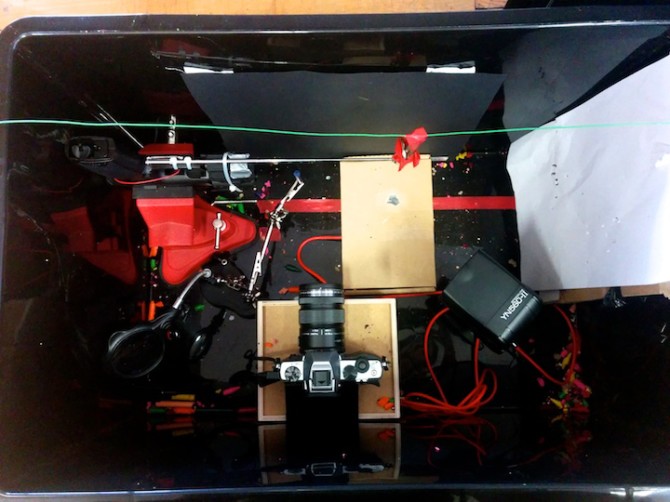 The full setup. It’s quite snug 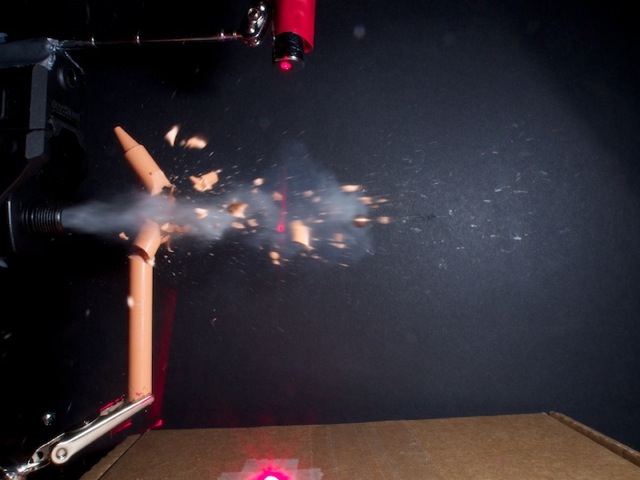 …and here it is in action

The procedure for taking a shot is simple. First, arrange the item that you are planning to destroy. I’ve been mostly shooting crayons as they’re cheap, brightly coloured, and shatter nicely. A good tip here is to put some electrical tape on the floor of the box to show the path of the projectile. This helps a lot in aligning the objects. Next make sure the laser and sensor are aligned (waving a hand through the beam and checking it triggers the flash is a good way). Then close the lid, press the button on the remote (or phone) to open the shutter, pull the cord to fire the gun, then press the button again to close the shutter. Then you can open the lid and check the results. If you have a camera that supports tethering then this would be easier, but the flip-out screen on the OM-D means it’s not too bad.

Some caveats apply. Being so close to the subject being destroyed means that there’s not much between your camera and flying debris. This isn’t a problem with crayons, but if you’re using something harder (or wetter) then you’ll need to take precautions to protect the camera and flash. The subject is also very close to the backdrop, so lighting can be tough. Trial and error and a selection of card is your best bet. If you decide to try this with real firearms then it is at your own risk. You may damage your equipment or worse. You’d better make sure you have a more effective backstop than an old programming book. Finally, if you don’t have an air gap flash (which wouldn’t fit in the box anyway) you will have blurred projectiles in your photos. I measured the speed of the YN-560 as around 40 microseconds on 1/128 power. No speedlight has a duration that is short enough to properly freeze anything moving as fast as even a BB gun pellet, even on lowest power. This is the problem I’m working on solving now.

Matt Kane is the founder of Vela Labs, and is currently working on reinventing the high speed flash. Previously he was co-founder and CTO of Triggertrap, where he created Triggertrap for iOS and Android, and Triggertrap Ada. He knows quite a bit about triggering cameras and flashes.

How and why you might want to use High Speed Sync flash in the studio
« What Do You Think? Can A Service Like Togally Help Pro Photographers Earn A Living?
A Terrifying Image: Underwater Camera Gets Attacked By Great White Sharks »