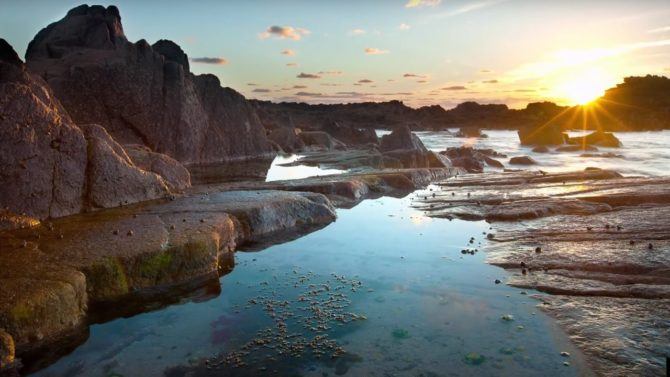 Seascape photography isn’t something that’s really been high on my list. I’ve lived near beaches almost all of my life, but they’ve been a bit too featureless for my photographic tastes.

If you are lucky enough to live near a picturesque coastline, photographer Karl Taylor offers some great tips in his new video. Some of the tricks also work around lakes, rivers and other freshwater locations, too.

Karl is a big fan of graduated ND filters for landscape shots, but there are things you need to think about when using them. He chose to not use them here, because of the angle of the rocks in the shot, and the very uneven skyline. There’s no way to accurately and reliably place a graduated ND for a scene like this.

So, he went with a circular polariser instead. While it may not affect the sky that much, pointed directly toward the sunset, it does still affect reflections in the water. This is why he used it, to be able to hide them a little and see through the water.

Shooting multiple exposures, one for the sky and one for the ground, lets him merge the two together in post for a balanced image. When you’ve got a scene that can’t benefit from a graduated ND, this can be your only option.

As for the bucket, well, you need to have some nice reflection on your rocks. Otherwise, they just look dull and boring. I’ve also done this sometimes photographing portraits on the edges of lakes and rivers.

I know some will consider the bucket technique to be cheating, but I don’t. It’s simply a matter of improving the look of the scene to make the image one wants to create. Nobody ever said that landscape or seascape photography was supposed to be documentary. Those that disagree with it don’t have to do it.

One other tip I’ll offer, is to remove any UV filters on your lenses if you use them. When you’ve got the sun shining straight into your lens it can easily cause ghosting. Somebody asked me about this a few years ago, so I shot a short timelapse sequence demonstrating why they’re often a bad idea.

The same can happen with polarisers and ND grads, too, but it’s usually not as pronounced. It is something you’ll want to be aware of, though. If you’re getting “ghost” lights in the opposite part of your shot, and don’t know why, then it’s probably the filter.

Do you shoot seascapes? What other tricks and tips can you offer? Let us know and show off some of your seascapes in the comments.

These 10 tips will help you improve landscape photography in 2017

« Quick Tip: How to not lose all your photos if your phone dies
Pentax K-5 IIs gets covered with pink fire retardant, hosed off, and carries on shooting »