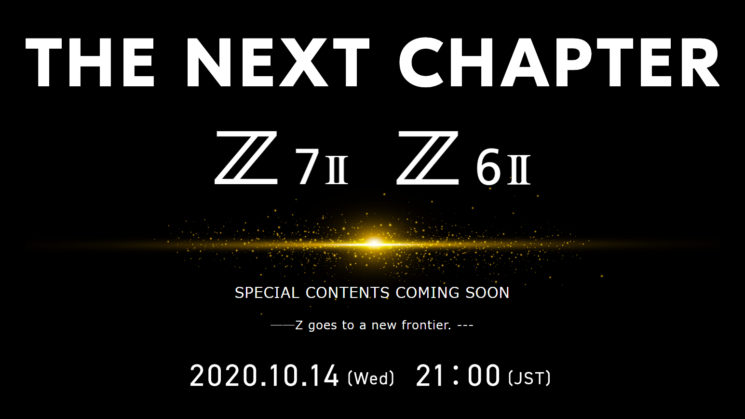 Well, we new something was coming, but we were all a little wrong with the name. Instead of the Z6s and Z7s, they’re actually going to be the Z6II and Z7II and Nikon is planning to official announce them on October 14th – according to a new teaser that’s popped up on the Nikon website.

A couple of successors to the Z6 and Z7 have long been rumoured, hoping to see some features added (like dual card slots) or refined. And while the rumoured names were wrong, if the rumoured specs were close, then they’ll only be incremental updates, but will offer a couple of nice benefits over the existing models.

The tagline’s a little confusing… “Z goes to a new frontier”. I thought “space” was the final frontier and, well, Nikon’s already been there. They’re still there, right now, up aboard the International Space Station. So, this better be good.

The last round of spec rumours looked a little something like this, with an announcement day expected for some time this year, possibly October. That part, at least, was correct. We’ll have to see if the rest of these pan out.

USB power, 4K 60 video and dual card slots (especially with at least one hopefully being SD) are all going to be welcome features to Z6 & Z7 owners looking to upgrade, as well as those who’ve put off making the switch to Nikon mirrorless until these features had been addressed.

And if these specs do prove true, the Z6II almost looks like it might be the camera to convince me to finally switch out my Nikon DSLRs.

While the announcement isn’t until October 14th, if past history is anything to go by, we’ll probably see a handful of teasers before the actual announcement comes.

Update: The Nikon USA website also has a countdown timer on its page to the new announcement.

Sigma Might Be Announcing its 85mm F/1.4 DG Art Lens At Photokina This Year

Blackmagic is announcing something today – Could it be a full-frame Pocket 6K Pro? Watch live here

Sony’s announcing… something on January 26th