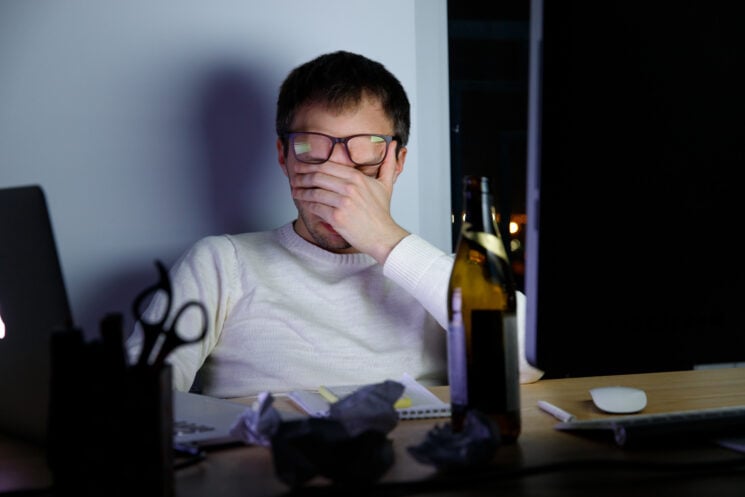 As photographers and creators, we rely a lot on our inspiration. In order to take photos regularly, find clients, or build our portfolio, we need to pair it with persistence and discipline.

However, there are certain life habits that break not only our discipline but also affect our mood and consequently our inspiration. In this fantastic video, Evan Ranft talks openly about some of these habits that destroyed his creativity, hoping to help you break them.

Watching this video, I was mind-blown by how relatable it all sounded. Even though Evan is talking from his experience, I’ve been through all of this myself so I’ll offer you some of my own insights and comments too.

So, what should you not be doing if you want your inspiration back?

Evan starts by mentioning the idea that you have to be doing something all the time which is present in society. I was surprised to learn that the US and Serbia are so similar in this mindset. In short, “if you take a break and don’t do anything ‘useful,’, you’re lazy and worthless.” I don’t know if this sounds familiar, but this was the model I grew up observing and it took me years to unlearn it.

If this is rooted in your system too, it leads to over-scheduling and overworking yourself. Even if you may not see it immediately, it’s one of the fastest ways to lead you to severe burnout. Ask me how I know. This leads us to the next two habits and they both revolve around neglecting yourself.

The first byproduct of over-scheduling is what Evan calls lazy eating. Put simply, you don’t have enough time to nurture yourself, and one of the first things that get messed up is your diet. It quickly becomes poor because you don’t want to take any extra time to prepare a nutritious meal for yourself, and this starts a domino effect: your diet affects your body, including your gut bacteria. Some studies suggest that incorrect gut bacteria balance affects your mood, contributing to depression. And naturally, when you feel depressed, you’re likely not creative or even in the mood to do anything.

When you put your job ahead of taking care of yourself, it starts showing in other areas of life. You’re overworked, you eat poorly, so you likely get burnt out and depressed. It’s all connected, and it sounds oh so familiar to me!

And no, “self-care” doesn’t need to be a three-hour-long spa session every day. It also doesn’t mean “treating yourself” with half of a chocolate cake. It means showing up for yourself. This expression sounds a bit cliché, but that’s really what we should be doing every single day. We need to take care of our personal hygiene, clean up our workspace, do something we love for at least 30 minutes every day, or take an extra five or ten minutes to make a healthy meal. This will make us feel better about ourselves, feel more loved and fulfilled, and ultimately in a better mood to come up with ideas and create.

If you search for inspiration on social media, don’t let it get out of control. You may easily end up mindlessly scrolling, wasting your time, and not creating anything. When I’m overworked and burnt out, I tend to fall into this trap. I don’t have enough energy to do anything, so I just “look for inspiration” until I go to bed.

What you can do instead is take walks, meditate, and exercise – it will clear your mind. You can even just sit in silence and let your own ideas come to you. Write them down, try them out – this way you’ll actually make something, even if it’s not quite there yet.

This is another thing on Evan’s list that I find super-relatable. In today’s hustle culture, I used to feel embarrassed to admit to myself that I can’t function properly without eight hours of sleep (at least). So I would hustle, hustle, hustle, and leave my sleep aside. The only result I got was constantly being irritable, forgetful, tired, and messing up my immune system so that I’d pick up every single virus there was.

When you’re sleep-deprived, you aren’t going to be as imaginative, but you’ll also have a problem executing your ideas even if you have them. It’s much better to sleep an extra hour and do your tasks faster, with more energy, and in a better mood.

Since the pandemic began, I’ve been going out less than ever, yet I started drinking more frequently. So this is another area where Evan hit the spot with his confession. For both of us, it doesn’t mean getting wasted every day. It’s a glass of wine or a beer or two we drink at the end of the day. It may not seem as much, but it slowly adds up and turns into a routine. Alcohol slowly becomes a tool to unwind and decompress after a long day, which certainly isn’t a good thing. If I didn’t feel it on my own skin, I wouldn’t have believed it, because “what harm can one or two beers do?”

Well, even such small amounts of alcohol add up and affect your mood and your sleep over time. And as I’ve mentioned, a bad mood and poor sleep further affect your creativity. So, start switching that booze for a healthier ritual. Or if you feel the need to sip something in the evening as I do, I recommend my new favorite: chamomile and lavender tea with honey and a splash of milk. You’re welcome.

Overthinkers, raise your hand (imagine me raising both hands now). Over-analyzing and overthinking everything before you actually do it, does it sound familiar? This is about trying to control every single bit of your plan instead of letting the process unwind naturally. It’s complex, but it often comes out of fear.

However, overanalyzing everything will not lead you to any results. It’s just going to make you feel drained and tired (ask me how I know). Rather than wasting an hour or two over-analyzing, spend them on actually trying out that idea you’ve had in mind. I know it’s easier said than done, but psychotherapy helped me immensely with this and I can’t recommend it enough.

I hope that you have enjoyed Evan’s video as I did and that you found his and my remarks useful. It may not be easy to change your ways, but it’s not impossible. Take one step at a time, build healthier work and life habits, and watch your mood and inspiration improve.

[The Habits that Destroyed my Creativity | Evan Ranft]

Break the rules of your lenses’ main purpose to increase creativity

Want your photography career to grow? Avoid these bad habits

« Aputure finally announces Amaran LED tubes along with some flexible LED panels
Here are today’s photography April Fools, did you fall for any? »