Well, we knew a B&H video for the Sony A7S III would be coming as soon as the announcement was official, but it looks like it’s leaked out a little early. It’s been uploaded to the YouTube channel House of Intent, although they don’t say how they acquired the video and I wouldn’t like to make a guess, although it is only 720p resolution, so it’s unlikely they had access to the original source.

But it is the complete 16-minute review, going over just about every feature the Sony A7S III will have to offer. Obviously, there’s a big focus on video in the review, as it’s a video-centric camera, and while it doesn’t offer 8K RAW, it has no recording limits and a new passive cooling system means it’s far less likely to overheat.

I’m not going to spoil too much here – you’ll just have to watch the video – but it’s an impressive looking camera with a claimed 15-stops of dynamic range, and some very impressive high ISO performance. The video shows tests all the way up to 409,600 and although the ISO range isn’t any different to the A7S II, it’s much cleaner. Bear in mind, this is a screengrab from a 720p upload to YouTube, so it’s not showing all of the original noise and detail. But… wow! 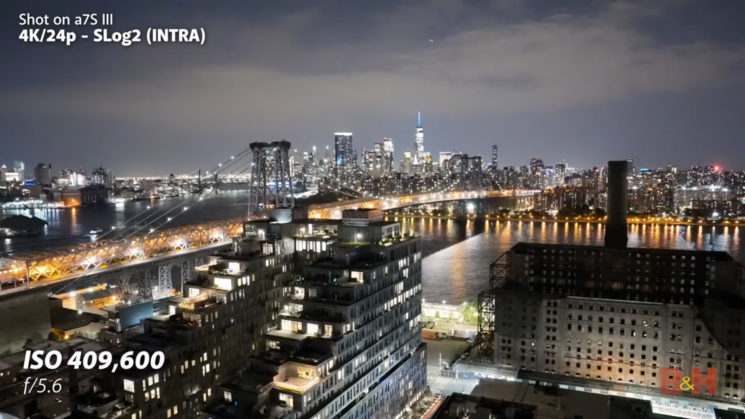 Finally, though, Sony seems to have listened and released a mirrorless camera that can record 10-bit 4:2:2 internal at 4K resolution. It also offers RAW output over HDMI up to 60 frames per second at 16-bit depth. There aren’t any recorders out there that can support the full 16-bit output yet, but the option is there right out of the box for the future. And you can still record to the internal card slots while putting out RAW over HDMI, too, for shooting low-res proxies internally.

Although mostly video-focused, they do cover the A7S III’s stills capabilities in the video. Stills likely won’t be the priority for most people getting the A7S III, given the relatively low-resolution 12.1-megapixel sensor, but if most of your work is only going online, you don’t really need crazy high resolutions anyway.

The review will likely answer a lot of your questions on how the camera will act in the real world – which is important because the on-paper specs don’t always tell the full story on an actual production.