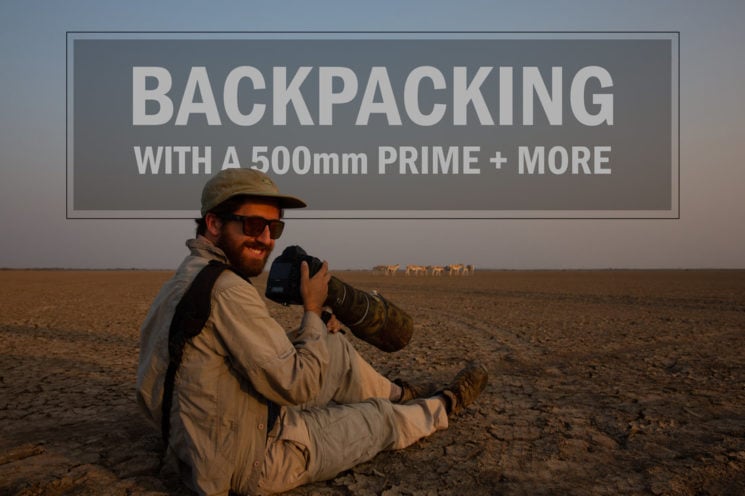 6 Months ago, my girlfriend and I finally did what we had always dreamed of doing. Quitting our jobs and traveling the world. This is a relatively normal narrative for western couples in their 20’s, but the difference here is I am a passionate wildlife photographer. We planned to travel for approximately 2 years (or until our money runs out) and so far have visited Indonesia, Nepal, India and Sri Lanka. Over the years I collected my photography kit to reflect my needs for wildlife photography, but leading into the trip, I needed to decide what I would be taking to backpack around the world.

After toying with the idea of switch to a lighter Sony rig, several Canon body changes and many deliberations, I decided on the following kit:

All of this was jammed into my Mindshift First Light 40L backpack, which I was hoping would be a suitable bag for the trip. Choosing a bag was also a tough choice. I originally wanted to take my favorite bag, the f-stop Loka. But getting out the 1DX with the 500mm attached from the opening on the backside of the pack was not a quick process. As a result, the First Light got the pick, with its massive opening. It also had the added benefit that it (just) fit the 1DX with the 500mm AND the 1.4x teleconverter attached. 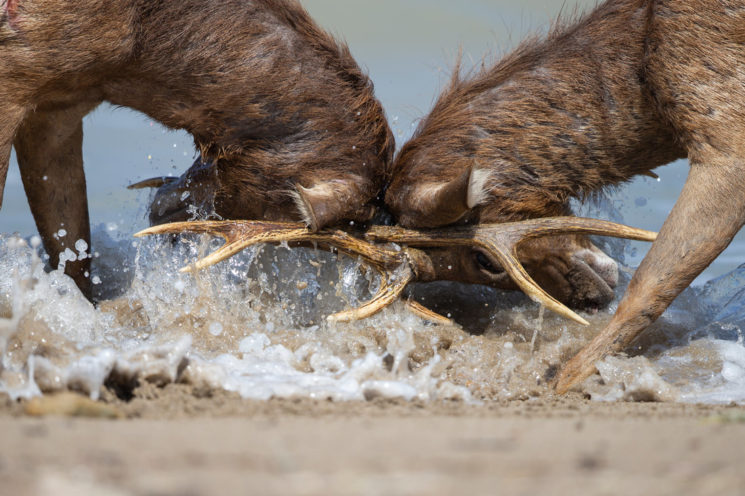 Javan Rusa fighting in the surf on Komodo Island, Indonesia

Many other concerns plagued my mind before deciding to take all this gear to some remote, dangerous and difficult places – but ultimately I wanted to take the gear to be able to photograph the world (and its animals) my way.

One of the first concerns people kept mentioning to me before I left was the safety of traveling with such a large value of photography equipment. And of course this thought had crossed my mind. However, during the past six months there has not been a single incident where the gear (or myself) has been in any real danger. Now this is partly due to being quite cautious about when to pull out my camera(s). But is also partly due to luck, as several times (especially in the tea-houses of Nepal) the bag would be left unattended in an unlocked room. When I felt things were getting a tad dicey, I did have a small padlock that would lock the one zip entrance to bag – not foolproof but a deterrent. The main attention I received (especially while carrying the 1DX with 500mm prime) is people coming up to me and saying “Woah that’s a big camera”, “How much did that cost?”, “You must be a professional” and “That looks like that weighs a lot”. Which leads me to my second point. 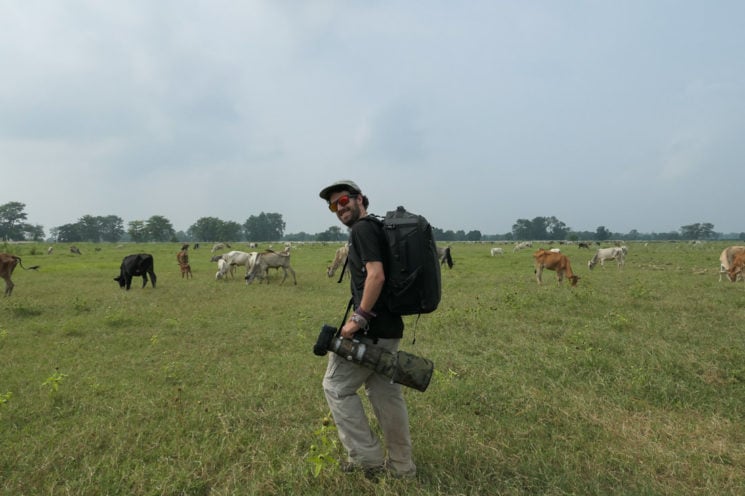 Myself carrying all my equipment through a herd of cows, searching for Black Buck, Nepal

It was an unavoidable fact that the amount of gear I wanted to travel with weighed a lot. Camera gear alone (once you include a small tripod, chargers, spare batteries and other bits and pieces) was coming close to 15 kg. I was able to stash some of this gear in my checked luggage while flying, but even with just bodies and glass, my cabin bag was still well overweight. Over the last six months and around 15 flights, I have been very fortunate that my cabin bag has never been weighed. Obviously this could all come crumbling down the very next time I fly, but I’ll cross that bridge when I come to it.

The weight of my gear has other implications. Other than cameras/glass, I also have to travel with enough stuff to live for two years. Sleeping bag, clothes, toiletries, books, shoes etc – all the stuff a normal person travels with. Combining this with camera gear makes backpacking that little bit more of a work out. Getting on and off of buses, walking up hostel/hotel stairs, walking around airports – all a little bit harder due to the weight. I think my body is slowly getting used to it. Of course I could have chosen a lighter kit – especially switching to a mirrorless setup could have saved me kilos! However I had too much invested in Canon glass to be able to make a clean switch to Sony and, at the time I left home, Canon didn’t even have a mirrorless (let alone one that could replace my 1DX). 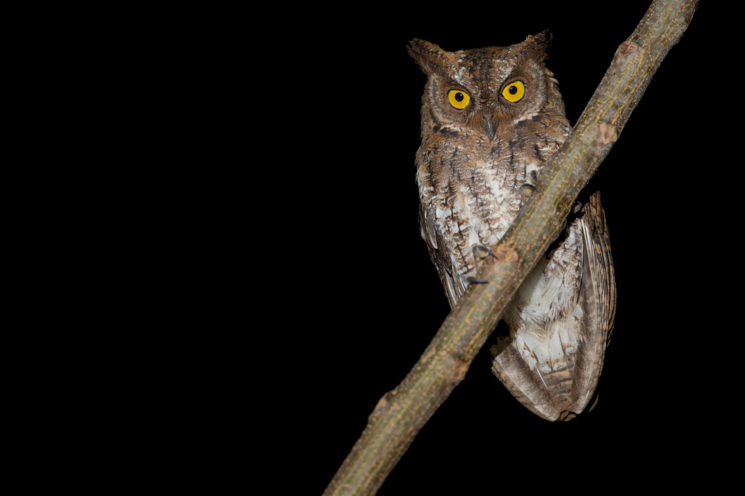 The recently described Sulawesi Scops Owl came to visit our accommodation on the island of Lombok, Indonesia, where it is endemic

Traveling with pro bodies and Canon’s L-series lenses I expected my gear to withstand the backpacking life. So far, it has. This hasn’t been without concern though. Numerous extremely rough bus, boat and jeep rides shook me, and my gear to our core. The fact that it has all survived is a true testament to Canon’s build quality, and presumably the bag its all housed in. Both cameras have taken a tumble. The 1DX + 500mm fell off my Black Rapid strap while hiking back from a Red Bird of Paradise lek in Raja Ampat, Indonesia. It landed pretty flat, with soil getting smooshed into the nooks and crannies. The metal plate at the base of the flash mount also came loose – but this hasn’t impacted its use. I managed to slip over on some wet rocks on Komodo Island, Indonesia. Of course I was carrying the 5D and 24-70mm. Lucky for lens hoods, as both the lens and camera came off without a problem. I’m sure there’ll be more drops, shakes and vibrations to come – but I’m confident the gear is up to it. 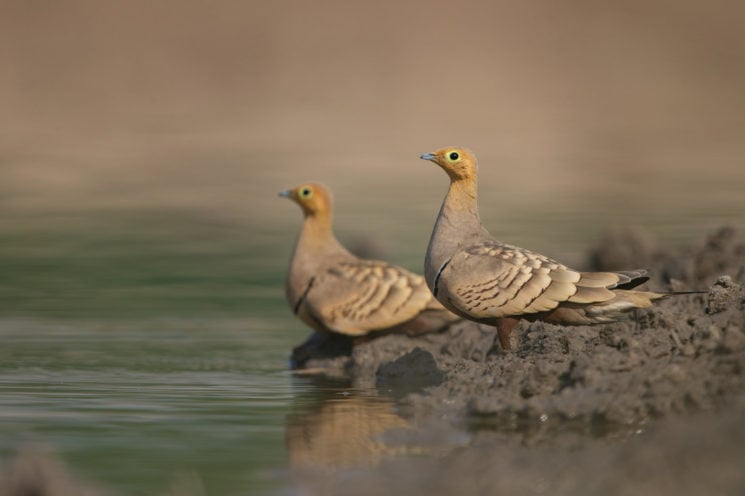 Male Chestnut-bellied Sandgrouse come down for a drink at a small watering hole, Gujarat, India

The annapurna base camp trek

A plan from the start of our trip, was to do some trekking in the Annapurna Conservation Area in Northern Nepal. After some research we settled on a 10 day – 100km trek to the Annapurna Base Camp via Poon Hill. Once again I was tasked with deciding what to bring and what to leave in the hotel as we had decided to tackle the trek without a guide/porter.

In the end I decided I had to take the 500mm prime, as

a) it was too valuable to leave in the hotel – even though it was one we trusted. And

b) I was hoping to see some interesting wildlife on the trek.

Accompanying it was the 1DX and the 24-70mm, all the other gear would be left behind.

Along with all my warm clothes and other essentials, I was up for carrying a ~ 14kg bag for the next 10 days. It nearly broke me but, in my opinion, the shots that I was able to get on the hike made carrying all the gear worth it. 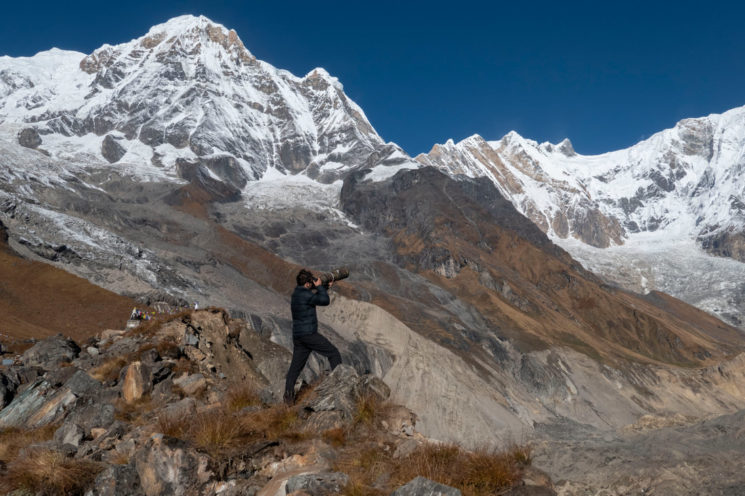 Myself photographing Alpine Chough above Annapurna Base Camp, Nepal, ~4,130 m

Wildlife photography on a backpackers budget

One thing I underestimated on in the trip, was the financial cost of wildlife photography while travelling. Obviously I am well aware of the cost of my gear, however other expenses came into play that I wasn’t so used to when I would head out for a wildlife weekend at home in Australia. Much of Asia’s wildlife is restricted to its National Park’s, and with National Parks come entry fees, guide fees, camera fees, jeep safari fees and so on. In Australia, having a guide to show you wildlife is an absolute luxury, a service I had only used once or twice. However in the majority of National Parks we have visited abroad, a guide was compulsory. And a lot of the time, this was a huge benefit, as we were able to find and photograph animals we wouldn’t have had the chance of finding on our own.

Other times this was very tedious, with some guides having little to no interest in animals, but more than happy to take our money. Some animals that I had really wanted to photograph at the start of the trip, became financially impossible to justify, and ended up getting scrapped from our itinerary. The most notable account was with the Asiatic Lions of Gir, India. We didn’t have plans to visit Africa on this trip, so this was my only chance to photograph Lions in the wild, as this is the only other place outside of Africa that Lions are found. Apparently the people at Gir are aware of this fact, and they charge through the nose for the privilege. A 2.5 hour jeep safari was going to cost us ~$260 AUD (~$190USD) with absolutely no guarantees we would we would find any lions. For us, this was nearly 2 weeks worth of accomodation! Losses had to be cut and the money was better spent elsewhere. 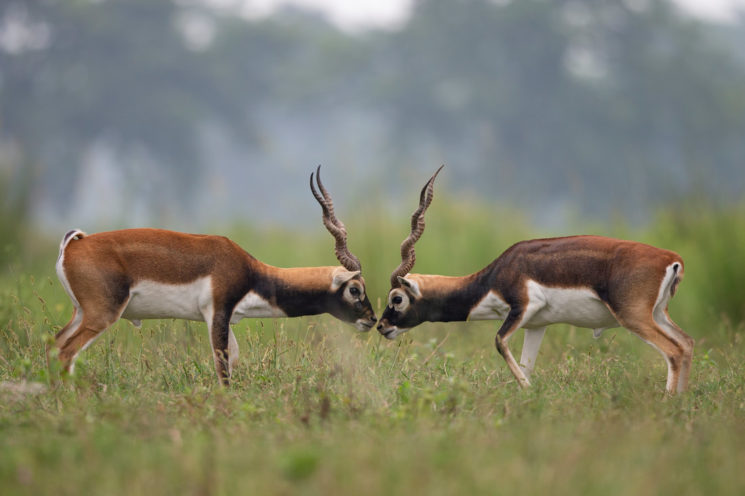 While travelling with the gear hasn’t been easy, the images that I have created during the past 6 months have, in my opinion, made it very worthwhile. We look forward to the next 18 months of backpacking with ludicrous amounts of gear.

Jono Dashper is a professional wildlife photographer from Australia. With a degree in Environmental Science and a camera in his hands, he travels the world with his partner, looking for unique and rare animals to photograph. You can see more of Jono’s work on his website and Flickr, and read his blog, too. This article was also published here and shared with permission.

Sigma’s 200-500mm f/2.8 monster is without question the world’s most ridiculous portrait lens
« 5K RAW 24p is coming for the $150 Canon EOS M
The impact of low-angle shots on your photos and videos »