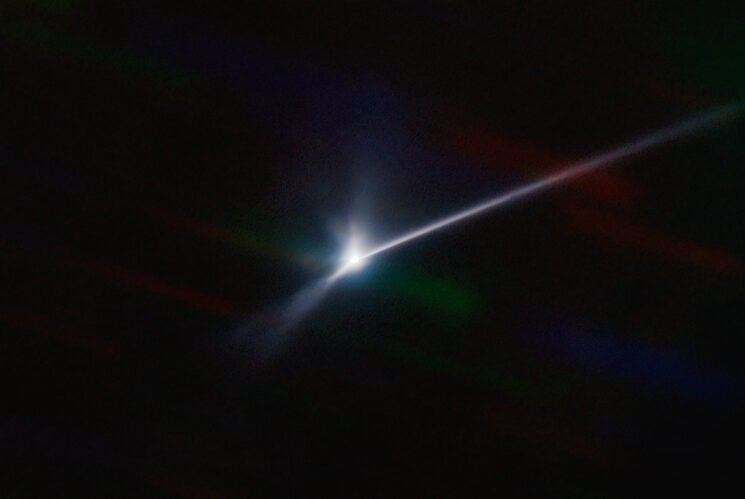 Astronomers captured an extraordinary image of the vast plume of dust and debris blasted from the surface of the asteroid struck by NASA’s spacecraft last week. The image shows at least a 10,000-kilometer-long dust trail.

The image was captured by NOIRlab’s SOAR telescope based in Chile. The plume or tail is called the ejecta and is similar to those seen trailing a comet. It was captured two days after NASA’s DART experiment where they deliberately crashed an unmanned spacecraft into the asteroid Dimorphos to see if they could successfully alter its course.

“It is amazing how clearly we were able to capture the structure and extent of the aftermath in the days following the impact,” said astronomer Teddy Kareta.

These observations will allow scientists to gain knowledge about the nature of the surface of Dimorphos, how much material was ejected by the collision, how fast it was ejected, and the distribution of particle sizes in the expanding dust cloud. For example, whether the impact caused the moonlet to throw off big chunks of material or mostly fine dust. Analyzing this information will help scientists protect Earth and its inhabitants by better understanding the amount and nature of the ejecta resulting from an impact, and how that might modify an asteroid’s orbit.

“Now begins the next phase of work for the DART team as they analyze their data and observations by our team and other observers around the world who shared in studying this exciting event,” said Matthew Knight, an astronomer at the US Naval Academy. We plan to use SOAR to monitor the ejecta in the coming weeks and months. The combination of SOAR and AEON is just what we need for efficient follow-up of evolving events like this one.”

It really is an amazing thing to behold. Last week both the Hubble and the James Webb telescopes shared their images of the collision. Hopefully, if there ever is an asteroid that could hit the earth, we will have the knowledge and resources to alter its course before it’s too late.

« The future of photography and the definitive answer to pineapple on pizza: Manfrotto tells all
Otherworldly abstract landscape wins 2022 Epson International Pano Awards »