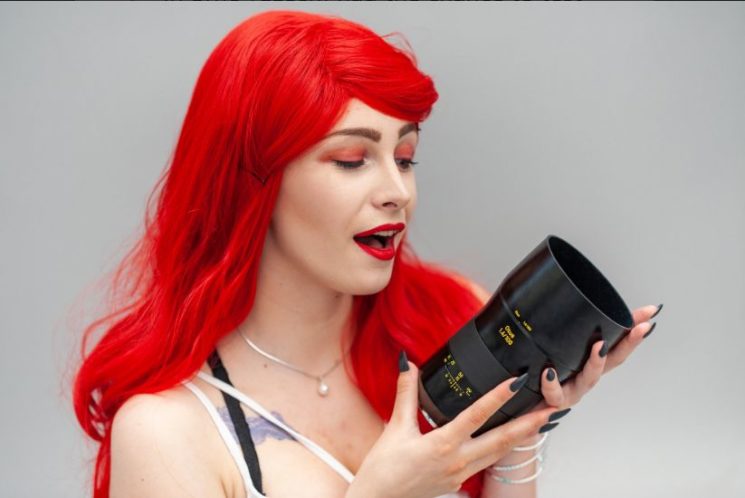 Earlier this year, Zeiss announced the Otus 100mm f/1.4 lens and it was promoted at Anime Fest in Brno (Czech) this May. After the event, the company tweeted a few photos of a model holding the lens, wearing a Disney-inspired Ariel (as in, The Little Mermaid) costume. However, there was such a backlash from the community, that Zeiss had to issue an apology to everyone who found the photos offensive.

“Recently, the visitors of #animefest2019 in Brno (Czech) had the chance to test our #ZEISS lenses. Ariel didn’t hesitate and chose our new #ZEISSOtus 1.4/100!Photographer: Creative Wolves, model: Katka Kavanová”

As you can see, the photos show “Ariel” looking at the lens with affection, and there’s a BTS shot of the photographer who was taking photos of her. Judging from the comments, I think that Zeiss achieved the opposite effect of what it was hoping for.

Most of the comments come from people who feel “disappointed” and “disgusted” by the photos. Many of them have called out Zeiss for “using” women to sell products, wondering “what decade we live in.” Some comments point to the fact that Ariel didn’t really choose the lens, considering that it isn’t attached to any sort of camera body. Some of them go as far as to claim that photos like this are “what have help[ed] make [their] life as a female professional photographer harder for the last 30 years.” On the other hand, there are also those who don’t see the problem, but they’re in the minority.

If Ariel chose it, maybe have her use it with a camera rather than make her sit like a prop.

They didn't think this through. This whole ad is just wrong… Plus, if Ariel really chose the lens, why isn't it attached to any sort of camera body?

The mainly angry comments poured in for three days. And then, Zeiss issued an apology:

“Dear Community, We apologize for any offense caused by this post as part of an anime event. We have listened to your feedback and take your comments very seriously. Thank you for your engagement on such an important topic.”

Dear Community,
We apologize for any offense caused by this post as part of an anime event. We have listened to your feedback and take your comments very seriously. Thank you for your engagement on such an important topic.

I personally think that using women to sell any sort of stuff is wrong and ridiculous. However, in this particular case, I don’t see such a major problem. Are the photos cringeworthy? Sure they are, at least in my opinion. But here’s why I don’t think people should be offended by them to such a huge extent.

First, there is a photographer trying out the lens, he’s even shown in one of the photos. Katka Kavanová, or “Ariel,” is a model, not a photographer. So, why would she mount the lens onto a camera and use it? And second, as one Twitter user points out, Kavanová is totally “in character.” If you’ve seen the movie, you’d know that Ariel can’t possibly know what a lens or camera is. I mean, she used a fork to comb her hair, why on Earth would she know how to use a camera lens?

She’s just doing what we does. Look at her Instagram. She enjoys being portraid like this.
And, she’s in character. Ariel doesn’t know what a lens or camera is.
Similar could be said of the photographer.
Huge amount of virtue signaling and fallout culture on display here.

The bottom line is that Zeiss could have thought this through a bit better. In other words, if they really wanted to Tweet photos of “Ariel” holding a lens, maybe all this fuss could have been avoided by paying more attention to the wording. From what I saw on Twitter, some users seem to have the same opinion.

« How to recreate the epic Stranger Things opening sequence
Photographers, manage your ego if you want to grow as artists »