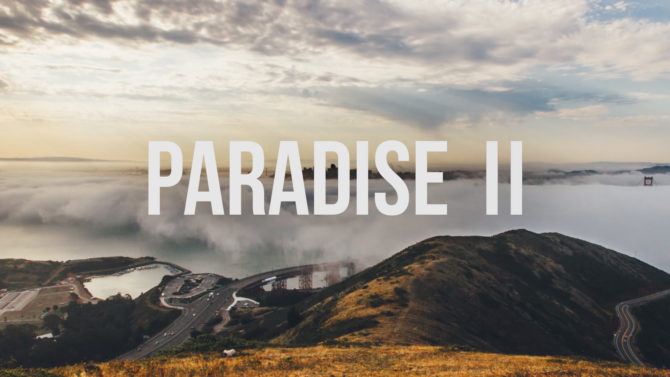 In November 2013, filmmaker Matthew Maniego presented us with a great timelapse of San Francisco called Paradise x SF. Since that time, he’s been working on a sequel. It’s finally here, and some of the scenes are just breathtaking.

Paradise x SF 2 has a very different feel to its predecessor. The music is calmer, the scenes more relaxed, and this time it’s been rendered in 4K for some stunning detail. Matthew spoke with DIYP and gave us some information on how it came together.

Three years is a long time to put into anything. Many timelapse photographers, though, are used to long term projects. When you’re speeding up time, sequences that play back in just a few seconds may take an entire day to record.

With remote locations that are miles apart, travel time must be taken into account. If you want consistency between shots, you’re also very dependent upon the weather. You can easily see how that time quickly adds up, especially when you have real life to contend with, too.

Where Matthew didn’t skimp was on camera movement. All else being equal, moving the camera while shooting is what makes the best stand out. Of course, being able to move the camera isn’t enough on its own. One must also be able to move it well.

For this, Matthew used the Dynamic Perception Stage One motorized slider, along with the Emotimo TB3 3-axis motion control camera robot. He certainly used them to great effect. Some of the footage was even licensed for use in the Super Bowl in February.

Matthew tells us that the timelapse, which lasts a little over 2 minutes, involved shooting over 100,000 photographs, a little more than 1.5TB of storage space.

This is one of the problems shooting timelapse. Until you can actually get it back onto your computer it’s difficult to predict exactly how it will play back. So, while your video may only end up being a few thousand frames, you might have to shoot tens of thousands of images to have enough consistent variety to choose from.

It took around six weeks in total to work on the footage. In Lightroom, the files were processed with LRTimelapse. Colour and grade applied with the help of VSCO presets. Adobe Premiere Pro was Matthew’s editor of choice for the final video.

The transitions between shots are very interesting. They have sort of a hyperlapse type feel to move you from one location to another. I’ve admired this technique for a while. One of these days, I’ll even give it a try myself.

The transitions in the original were very different, a little more jarring, but it fit with the music. Well, I say music, it’s Coldplay. If you missed the original Paradise x SF, check it out below. As you can see, it has a very different feel to his latest one.

Thank you, Matthew, for sharing some insight with us on how it was made. I look forward to seeing what else he produces in the future, and I hope we don’t have to wait another three years for the next one.

So, which do you guys prefer? The original or the new and improved Paradise x SF 2? Let us know your thoughts in the comments.