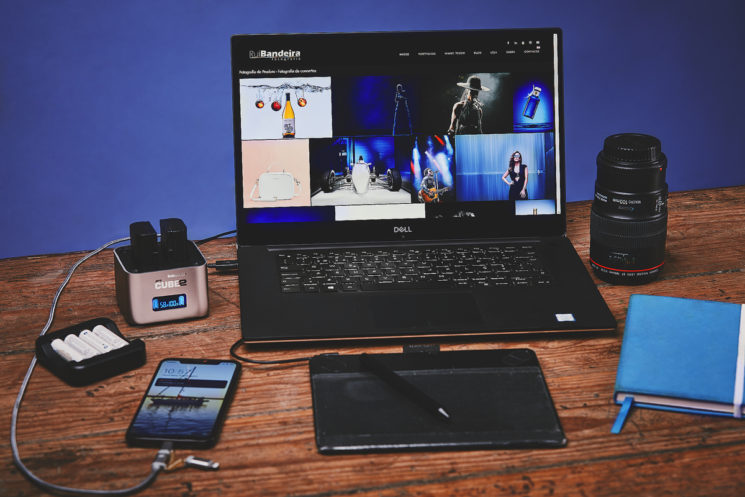 In recent years we have seen a demand for lighter and smaller cameras, and manufacturers have responded to that demand, mainly with mirrorless cameras, but despite the concern, on the part of photographers, to have less weight hanging from their necks or shoulders the same has not happened with what we carry in our backpacks. If you are like me, the space in your backpacks is never enough.

I always find something else to take with me. In my case, when I go out to photograph music festivals, mainly festivals that last several days, I cannot forget anything, I have to take everything I need and also take backup equipment, in case something goes wrong.
In these cases, at festivals, one thing that cannot be missing is the battery and battery chargers and here the problem begins, each charger needs a power cord, the battery charger, depending on the model may need a power cord or of an external transformer, if, like me, you work with two cameras, and each camera has a grip with two batteries, that makes 4 batteries in total, which requires at least 2 chargers so that we can charge any battery whenever we need.

If we do the math for two chargers with their respective cables, at least one AA battery charger with the respective cable or adapter and not forgetting the phone or tablet charger, we quickly realize the weight that we add to our backpack and the space it takes, not forgetting the worry of forgetting some of cables or transformers, who never, at the end of the day, went to charge the batteries and realized that a cable had stayed at home?

Another problem, that I usually encounter, is the limited availability of power sockets, whether in the press rooms or in hotel rooms, I usually never have many power sockets available, let alone nearby, to be able to connect everything at my workplace, I usually need six current points, for the laptop, for my 3 battery chargers, for the AA battery charger and for the mobile phone, which forces me to always carry an extension cord, to connect all the equipment, it has to be one with at least 6 sockets, which is big, too big to go in the backpack. 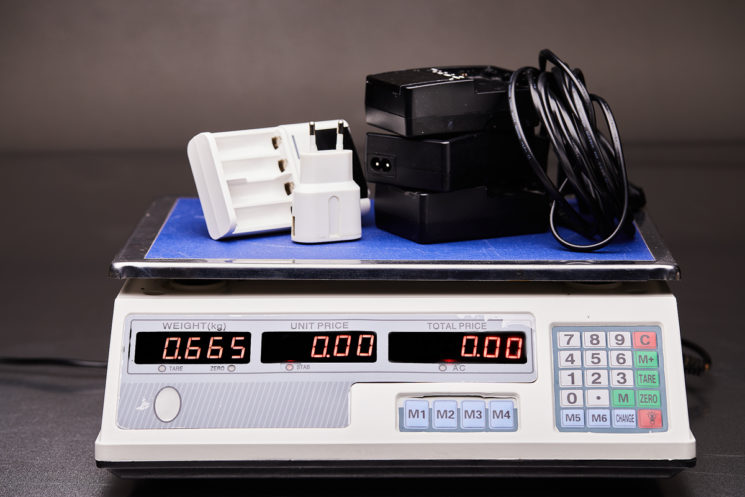 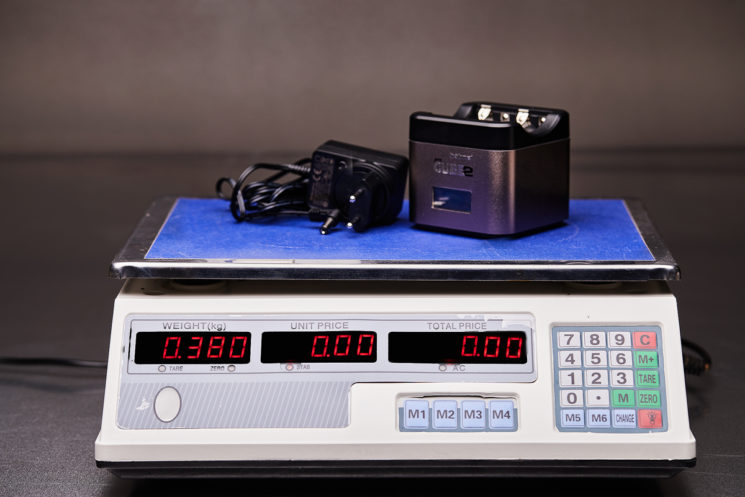 Save space and weight in your backpacks

We usually only have an option on our battery chargers, which we usually choose between the best price or the best quality, on-camera battery chargers we use the ones that come with the cameras and we don’t even think about it anymore, but when I realized I was taking up a lot of space and weight with these chargers I started to look for alternatives, and that was when I found the Hähnel Pro Cube2  and I quickly realized that I could recover space for, for example, one more lens, but also managed to reduce the weight of the chargers by almost half, and no longer needed 6 sockets, and now, I needed only 2, which means that instead of taking a huge electrical power cord, I just take a small Triple Outlet Tap, which also means a considerable space gain, even if you choose to take a smaller power cord, with three sockets, it is a significant space gain. 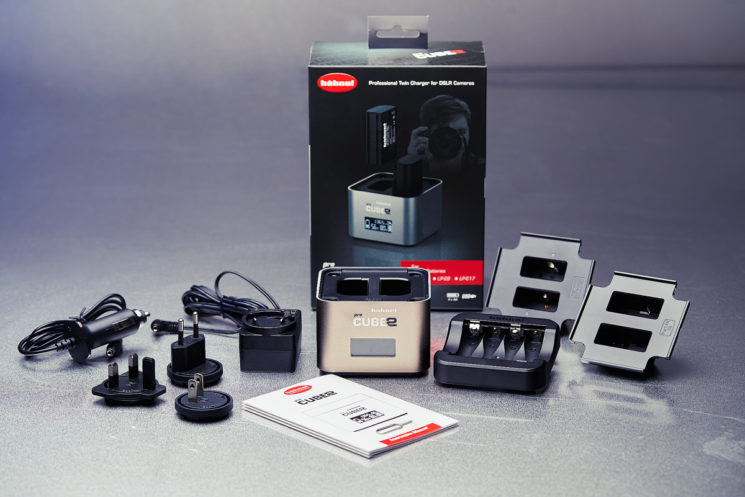 In the box of the Hähnel Pro Cube2, in addition to the Pro Cube2, we find the external transformer, the power cable for the car’s cigarette lighter, which allows you to charge the batteries on the move, which sometimes is very useful, three adapters, for the transformer, one for US sockets, another for European sockets and another for English sockets and also three charging plates for different camera batteries, with a key to change them, and of course the charging plate for AA batteries. 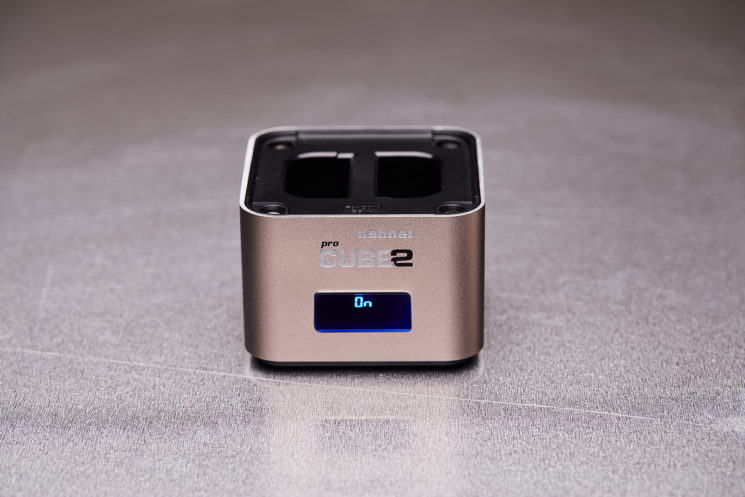 Externally the Hähnel Pro Cube2 is, as its name implies, a metallic cube, approximately 8 cm, which makes it very practical to carry in the backpack, if we separate the battery charging plate it becomes even more practical to carry, it has rounded corners, has a metallic paint that has different colors for each brand, is available for Canon, Sony, Nikon, Fujifilm, Panasonic and Olympus.

The transformer is external, but it is small, and does not take up much space in the backpack
The Hähnel Pro Cube2 with the transformer and the battery tray weighs 350gr, which in my case is about half of what I used to take with old chargers.
On the front there is an LCD that shows all the information about the charging and status of the batteries.

At the back we have a USB port, to charge equipment that allows USB charging such as mobile phones or tablets, we have the connection for the transformer or the car charger, which is included, and we have the input for the battery plate ejection key , the Hähnel Pro Cube2 model for Canon can charge 3 Canon battery models. 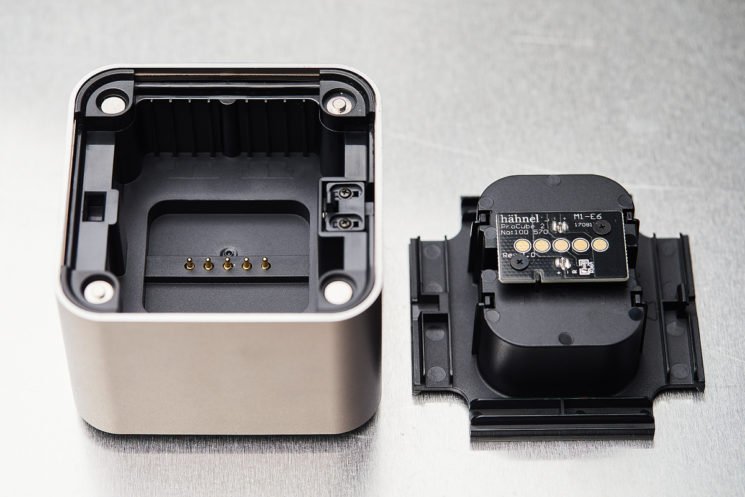 There is a Hähnel Pro Cube2 model, for Canon, Sony, Nikon, Fujifilm, Panasonic and Olympus, and each Pro Cube2 is compatible with more than one battery model.

To change the plates, just use the provided key to eject the plate and fit the desired one, there is no need to connect or disconnect cables, everything is connected by contact when the plate is fitted in place. 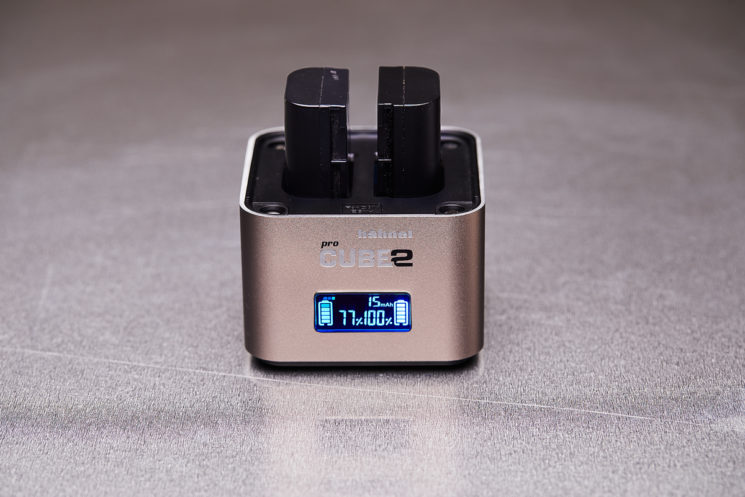 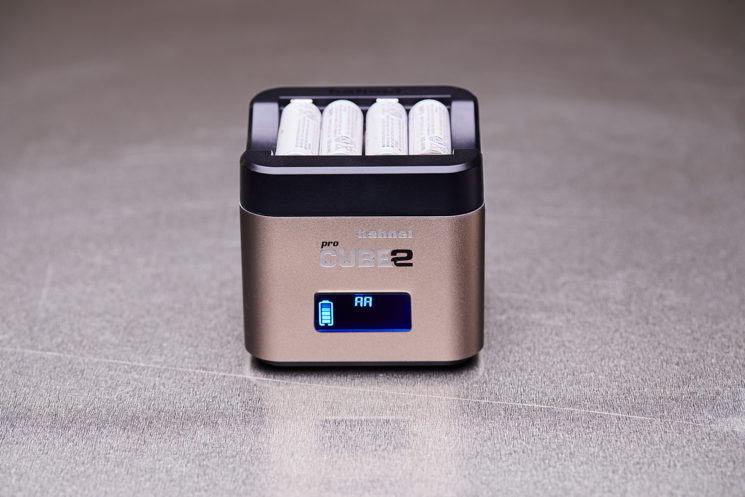 The Hähnel Pro Cube2 is a fast charger for both AA battery´s and camera battery charging, it can fully charge 4 AA 2500 Ni-Mh batteries in 4 hours (240 minutes).
In the case of camera batteries, you can charge 2 Canon LP-E6N in just two and a half hours (150 minutes), but here you can see the table with the times for each type of battery.

For those who, like me, have to spend a few days away, at work, and need to take the chargers, to be able to charge the camera batteries and AA batteries quickly, and who also need to save space in the backpack and weight, removing about 300gr, or more if we count on the power cord, may not seem like much, but for those who have to travel by plane, it can make the difference between being able to use a small or large backpack, or between carrying the backpack in the cabin or having to send it for the cargo hold, which with photographic equipment is not advisable, just for that reason the Hähnel Pro Cube2 is already worth it, but if we add the fact that we have a fast and robust charger, compatible with several models and brands, because we can buy new battery plates,  in case we ever need to charge other camera batteries from other camera brands, so it’s even more worthwhile.

Needing less power cables, for those who have to work in press rooms or even in hotel rooms is another advantage.

The Hähnel Pro Cube2, for me, would be perfect if it allowed us to charge both camera batteries and the four AA batteries at the same time, which would be perfect, but I also realize that for this to be possible it would have to be bigger and it would lose the size and weight advantage, but Hähnel engineers may find a way to get around this without increasing the size of the Hähnel Pro Cube2.

A Review of the Anker Astro3 External Battery Charger