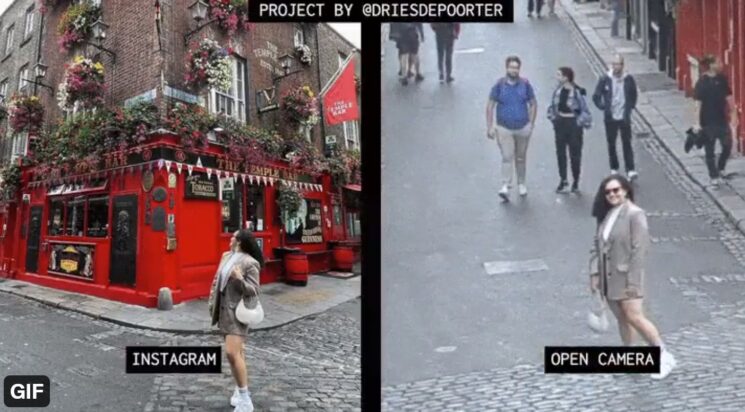 We’ve all seen those perfectly posed Instagram photos taken at various locations all over the world. But I believe that, like me, you’ve also witnessed while those were being staged. The super-focused face of a boyfriend or a bestie makes the scene kinda cute… And then the frozen unnatural pose of an “Instagram model” makes you cringe.

Artist Dries Depoorter recently launched a project titled The Follower, revealing precisely those cute yet cringe-worthy moments. Thanks to open webcams and AI, he finds your Instagram photoshoots in the street and shows the process behind them.

🔥NEW PROJECT!🔥
'The Follower' is software searching how an Instagram photo was taken with the help of AI and open cameras.

Dries usually makes projects around surveillance, privacy, and AI. Some of them include Border Birds, a series of photos of birds crossing borders, which was also captured with the help of open cameras and AI. He applied the same principle to The Flemish Scrollers, a project automatically tagging Belgian politicians when they use their phones on the daily live streams.

While creating The Follower, Dries recorded a selection of open cameras from EarthCam for weeks, covering New York’s Time Square, Chicago’s Wrigley Field, and Dublin’s Temple Bar. Then he scraped all Instagram photos tagged with the locations of the open cameras. He used software to compare Instagram photos with recorded footage. Dries launched the project on 12 September and it broke his website shortly after due to the number of visitors.

The Follower also went viral on TikTok, and I guess it’s no wonder: the project is strange, controversial, and rather eerie when I think about it. I feel like it breaks the aura of fakeness around posed Instagram shots, revealing our vulnerable, true selves just yearning for validation. And that’s why I like it. At the same time, I find it creepy to know how easy it is for anyone to not only track us down but actively watch us. While it makes me uncomfortable – it’s another reason why I find this project so powerful.

I posed for a photographer via Skype, and it was the coolest and strangest photoshoot ever

« What are the most used cameras in 2022? The results might surprise you
This Canon 5D Mark II has shot over 2.2 million photos »