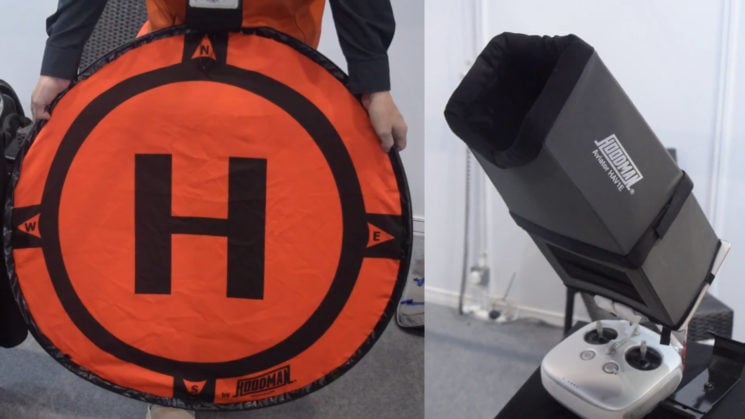 At The Photography Show, there are many big extravagant stands. But there are also many smaller stands, too, that don’t really need a huge stand. One such stand which caught my eye at the show this year was Hoodman. They’ve updated their drone accessories with some new sizes of launchpad, and they were also showing off their range of Aviator tablet hoods.

Hoodman have actually been making drone launch pads and tablet hoods for a little while now. But thanks to the ever-expanding range of drones from companies like DJI, new sizes are always required. So, to keep up with these needs, Hoodman have recently released some new ones.

Now, I’m cheap. I typically just use an old fold up reflector when I take the drones out. Like I said, I’m cheap, and so are the reflectors. If I have one that’s a bit dirty or tattered and it’s not much good for photography anymore, drones is what I use it for. But they have one big problem. They’re too light. If you get a slight breeze after your drone takes off, they can be flying alongside it. Even the propwash from a bigger drone can cause the reflector to take off and flip into the drone before it’s out of reach.

So, seeing the Hoodman launchpads in person was something I was interested in. And taking a look at the build quality and feeling the weight, I can now see why it’s worthwhile to get a dedicated launchpad. It folds up just like my reflectors, but they’re made of much tougher material, and the edge is weighted to prevent it from flipping up as your drone takes off or being caught by a breeze.

The tablet hoods are equally as interesting, and they’re available in a range of sizes. Although they’re generally sized around Apple products, they’ll obviously fit around Android tablets, too. You just have to pick the one that’s closest in size to the one you have. As most follow fairly similar dimensions, it shouldn’t be difficult to find the one you need.

My main drone right now is a DJI F550, which doesn’t do the whole tablet-mounted-in-the-controller thing. I just stream the onboard camera to a monitor on a stand at the side of me to be able to see what it sees. But it’s a problem I face with that, too. LCD screens aren’t the easiest things to get a good look at outdoors, especially if it’s bright and sunny. I plan to add the new Mavic Air to my gear arsenal at some point soon, so a tablet hood and one of the above landing pads will definitely be going on my shopping list.

Check out these other things we saw at the show, too…