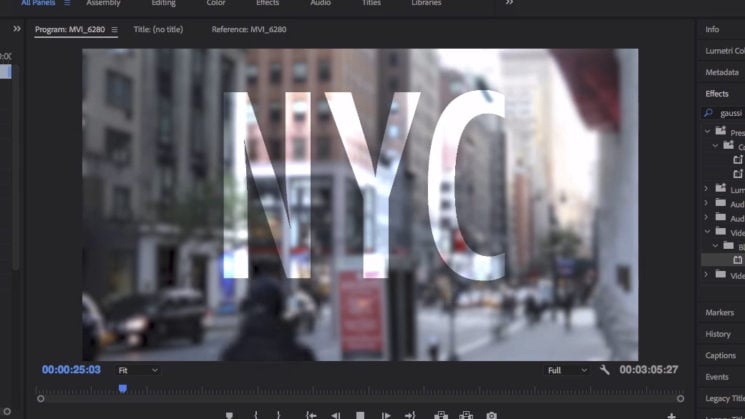 In a video production, it’s often the minor touches that have the most impact. They’re easy to miss, and most viewers probably couldn’t spot or pick them out for you. But they’re the things that can mean the difference between a viewer liking your video or finding it a bit amateur or annoying. In this video, Justin Odisho shows us 5 of his simple editing tricks to give your video that extra bit of production value.

This isn’t like racking your focus from one subject to another while shooting. This is a text and titles trick to help the viewer focus on the words rather than the background. Using dimming and blurring techniques will pull the viewer’s eye towards text, images or other information you wish to pop up in the foreground. Keyframes can also help to make this transition.

If you’re putting still images into your video, adding motion keyframes to slowly change the scale of a high resolution photograph adds some interest to the sequence. It stops it being a simple static image and gives it some life. Easing the animation makes the effect very smooth and subtle.

This can be done with video sequences, too. And it has become a lot easier today than it used to be. While many phones and cameras are capable of producing 4K footage, most of us still edit for 1080p. This allows us to scale and zoom the footage throughout a sequence without having to take a massive hit in quality.

This technique is commonly used with music. It’s essentially the reduction in the volume of background noise while a subject is talking. But this works with ambient noise in video footage, too. If you record a voiceover and want to maintain some of the original noise of the shots being spoken over, simply dip the volume of those clips during the narration.

Justin mentions that this is a complete topic in itself that could turn into a whole separate video. We’ve spoken a little about sound design before here on DIYP. Essentially, sound design allows you to use audio to enhance the visual. Sometimes the camera just doesn’t pick up the sound you need while recording, and adding it in post is the way to go. YouTube offers a whole bunch of sound effects you can use in your videos, and there are many other sources out there.

This is one of those things you either love or you hate. Although lens manufacturers have spent decades trying to eliminate vignetting from their lens designs, they are appealing. Perhaps our brains are just so used to seeing them in movies and TV shows over the years. Or, maybe it’s just that it helps to frame the main subject of your shot. Whatever it is, it’s a very handy technique now for taking the viewer’s attention away from the edges and towards the action.

So, that’s five small and subtle techniques that can ultimately have a big impact on your video. There are plenty of other tips and tricks out there to bump up your production value and give it a more polished feel. J and L cuts, for example, are good techniques to experiment with. These, though, will hopefully give you some ideas for things you hadn’t considered.

This video explains the difference between flow and opacity in Photoshop