When you first get a drone, every single video you shoot looks amazing. At least to you, the person who made it. Because you made it. But after a while, when the initial buzz has worn off, you look at your footage and perhaps feel a little deflated. It wasn’t as good as you remembered it being. So, you need to push yourself. Use drones in a more interesting way. Use them to tell a story.

In this video, Dirk Dallas of From Where I Drone walks us through five cinematic drone techniques. Each can be used to help tell a different part of your story and connect with the viewer in a different way. And, they’re visually impressive manoeuvres, too.

The reveal is a shot with, as the name suggests, reveals something. These can make for great establishing shots to show off a location. Or just to reveal a subject. We see it often in movies on the ground with things like sliders. The camera comes out from behind a tree to reveal some building or other. Or a person.

This is the same principle. The main difference here is that the camera’s in the air, and that offers certain advantages. As well as just moving from side to side to make you reveal, you can also move up and down.

This is a twist on the regular reveal. Because you’re in the air, you can also look straight down at a subject. You might start overhead on a small piece of the environment or a person. While moving, simply tilt the camera up to reveal the location or another subject.

This shot can help to create some mystery, as there’s very little context at the beginning of the shot. But by the end, you learn a lot more about what’s going on. 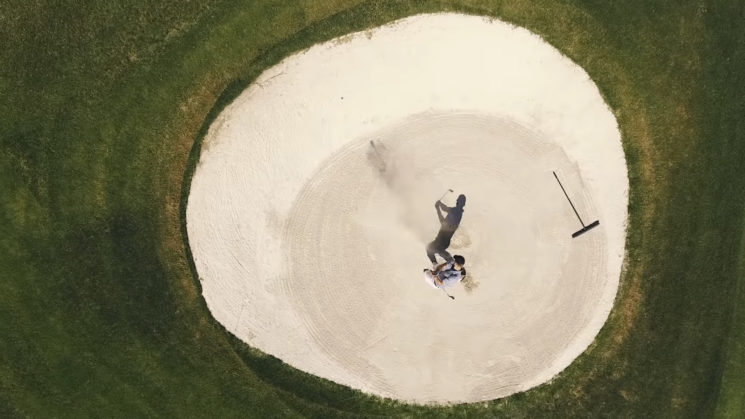 This is one we’ve seen quite a few times, and it’s actually one of the automated flight modes built into many drones these days. This is the drone essentially keeping track of a subject while flying around it in a circle. With the camera always pointing towards the subject, it can be a powerful storytelling tool.

If you’re not using the automated flight modes to achieve the orbit – and you really should practice and learn to do it manually – you can create some amazing effects. The best examples I’ve seen of this are where the camera moves out as it turns and revolves around the subject.

This is one of the trickier shots to pull off because it’s quite complicated to get to grips with. It’s the reverse of the tilt reveal. Instead of starting with an overhead and tilting up to reveal the environment, you’re starting off with the wide environmental shot, and then focusing in on a specific subject from above.

This is another great storytelling shot, as once we know where we are, it shows what detail or subject we need to pay more attention to. It can be a create lead-in to another camera shooting the same scene from a different angle on the ground.

As always, these aren’t the only storytelling shots you can make with your drone, but they are very effective ones.

If you really want to step your drone footage up a notch or two, then they’re ones you’ll want to learn.

11 essential tips to master night photography like a pro

Gimbals – Are they terrible and overused or a valuable storytelling tool?

The Intent in Photographic Storytelling