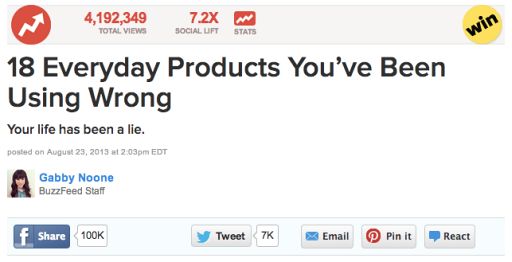 Last week (although by the time I post this it’ll be two weeks) BuzzFeed posted a highly successful “listical” 18 Everyday Products You’ve Been Using Wrong], it went viral and you can see why. The list is useful, involving household items some of which you probably use on a daily basis and has that “of course!” level of enlightenment.

And when I say “highly successful” I mean their most viewed post in way over two months, here’s a recent top 5…

We’ll get back to it being one of it’s most successful pages and why this is important in a moment. But first this is where my problem with this list comes in, down at number 14… 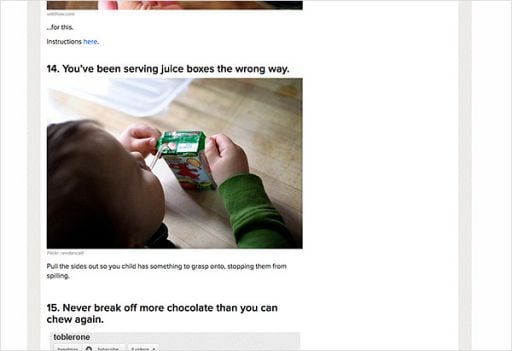 …where they used my copyrighted photo without permission.

1. Why I shouldn’t really be pleased they used it.

This comes up quite often with copyright on the internet in general, the “But you should feel proud that they’ve used your crappy photo, now it’s been seen by over 4 million people. Lots of people who wouldn’t normally see you work now have, you should be thanking them”.

Well, ok, lets entertain that thought for a moment, in which case even though Gabby, the list creator has given me a link, they’ve done it in about the worst way possible. Yeah, they’ve linked it to this page, the photo download page rather than the actual photo page on Flickr. 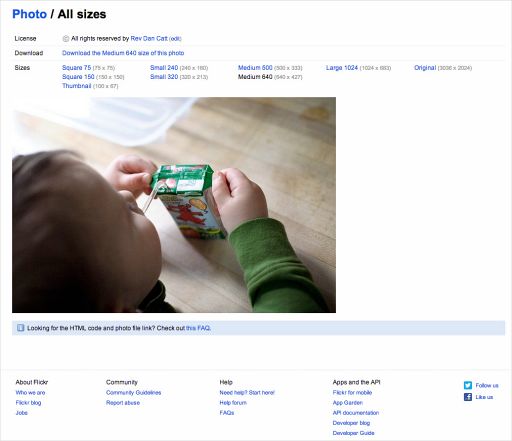 So all those 4 million plus views who may click through, will they count as “Views” on my Flickr page? No. Will they see the other photos each side of my photo in context, the tags used, the sets I’ve put it in? The description, notes on the photo and comments added to the page, even my icon and details about me?

If you really want to get picky about it, BuzzFeed who make money with sponsorship and ads placed next to content have linked to a Yahoo page that doesn’t show ads rather than the main page that does. They’re making money from they’re own ads while keeping click throughs away from ads of the original host.

It’s almost as though they’ve tried to link back in the most lame-assed way possible, thanks for taking those 4.2 Million views and adding hardly a single one to my own page. At least if you’re going to do it, do it right.

“[they] try their best to find image sources, but that it can be difficult and he assumed since the photo’s been all over the internet that it was in the public domain”

You see when you assume that because the “photo’s been all over the internet” that it was in the public domain, what you really mean is “Oh look, this was taken with a digital camera so almost certainly someone owns the copyright, we just can’t find them, better not use it then“. What you have there is an “orphaned work”, laws for which are being shaped up both the UK and US but aren’t quite ready yet, which basically mean, knock that shit off.

This is of course ignoring the fact that they could easily find the owner, as they sort-of linked back to my page and my photo hasn’t been all over the internet. Well at least until now, because now it’s popping up all over the place without any links back and I have to start DMCAing Tumblr to regain control of my own photo.

3. It’s not Transformative either.

Over on The Atlantic, BuzzFeed founder Jonah Peretti claims that throwing photos into a list is transformative and therefor falls under Fair Use.

So just how transformative is this use of my photos? Well here a member of the BuzzFeed staff has collated a list of handy tips on how to use items or features about them they may them easier to use. It’s a genuinely useful list, I even learnt something about Tic Tacs.

I know right, the transformation has created something utterly new, well done the geniuses at BuzzFeed for bringing something new to table.

Hey BuzzFeed, have you tried maybe producing an album called “18 Tracks That Got To Number 1 On The Billboard Charts in 2013? without licensing the actual music yet? Why not give that a go, let me know how it works out for you.

BuzzFeed has community contributors, hey I’m one at the moment, and they have a user agreement which suggests not uploading copyrighted content, and BuzzFeed can’t really be held responsible for content uploaded by their members. Thats what the DMCA takedown process is in place for.

However, in this case my photo was downloaded, re-uploaded and subsequently used by a paid up member of BuzzFeed Staff. Staff who are supposed to be give guidelines on how and when to use Licensed and Creative Commons Licensed photos.

On Slate Jonah Peretti goes on to say ”would love if every image contained some secret metadata and a way to license that image. But the practical reality is that it is pretty challenging“.

Hey, was the fact that the photo came from Flickr and you used my name and threw in a kinda-link just not quite secret enough for you? I know, figuring out how to licence the photo you were going to use in your chart busting, ad money making list was just to taxing for you I guess?

BuzzFeed pays Reuters, the AP, and Getty for rights to their photo libraries, but contacting an individual creator is far too much work, yay, thanks heavily funded large organisation for ripping off the creators again. Thanks for that.

You see, I’m not against BuzzFeed or others reusing content or making money, indeed I’m all for it. Which is why around 25% of my photos on Flickr have a Creative Commons (CC) Licence.

Here’s similar photos, same sort of angle and featuring one of my kids using some counting rods… 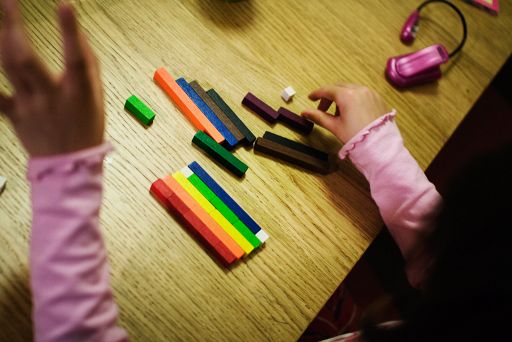 …which I knew would be useful for various Montessori websites, so I gave it a CC Licence, BuzzFeed go right ahead and feel free to use that one.

As a general rule I CC Licence all my photos unless they have my family or a recognisable person in it. Or another way, if there’s someone in it (unless I’ve agreed it with them) then it’s copyrighted because I want to keep some form of control over how it’s used.

This is my most used Creative Commons photo… 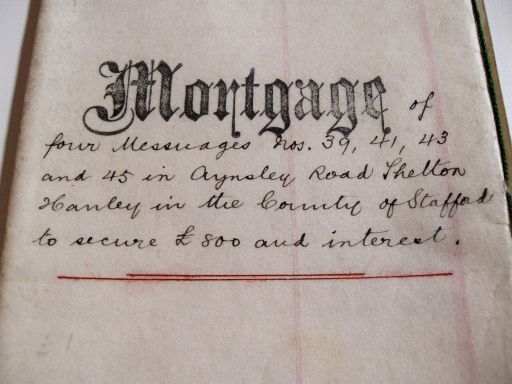 …because for some obscure reason Mortgages are a hot topic in the US at the moment and have been for a few years, who knew!

When we bought our house we found the document tucked into a box along with the full history of the house hidden under a bookshelf. I knew it was something uncommon and probably of interesting to other people, I added a liberal CC license to it so they could happily use it where they might have had trouble finding a suitable stock image.

Turns out there’s a whole bunch of spambots out there turning out blog posts of regurgitated junk, interlinking to each other and generally trying to game search engines.

And you know what, even they know to search Flickr for Creative Commons Licensed photos and generally they even correctly attribute the photo and link back.

8. The photo isn’t worth very much.

So hey, I’m not like this guy, going after $3.6Million. The photo of my son isn’t registered with the US Copyright Office, which would allow be to claim damages of upto $150,000, it’s just not worth that much.

If I’d taken a photo of some particularly news worthy or unique event and I wanted to be able to licence the photo to news agencies without them just taking it, then yeah I’d register it.

That doesn’t mean it’s worthless though.

As the kids grow up I’ve been collection various “Parent Hacks” were I’ve discovered useful ways of doing things, with the aim of one day producing a “10 Neat Things I Learnt While Being A Parent“. Now one of those things has been splashed all over the internet, which kind of devalues the usefulness of the list I was planning.

There’s even a chance people will think I’ve copied BuzzFeed or where-ever they’ve now seen the photo, which you know sucks.

So thanks for messing that up BuzzFeed, you could have just asked like you’re supposed to.

9. The UK has a new Photographers “Streamlined” small claims track.

Amateur Photographer has all the details, and the instructions.

That’s right, in the UK if you can document copyright infringement (and this totally is), can’t reach an amicable agreement, such as BuzzFeed not paying or responding to my invoice, send over a letter letting them know what’s about to happen and still get things sorted out… then you can plunk down your £50 fees (for claims of £500 and less).

No lawyer needed and it can all be dealt with on paper without a court appearance if the judge decides it’s an open and shut case.

Of course BuzzFeed may choose to ignore the invoice or dispute the claim but then they have to turn up in court to do that which is going to cost them more than the invoice.

10. Bonus – Now they change the photo

And since asking BuzzFeed where to send the invoice to, they’ve changed the image, 18 days, 4.2 Million views later.

The most viewed “Listical” for the last few month and not a single person could be bothered to check that all the photos were correctly licensed? These are the lists that get put into presentation decks for “See what our reach is like, this list got over 4.2 Million views”. They’re fine ripping off people for that, but the first hint that they may actually have to pay for the content put into those lists and oh suddenly they’ll rip it off from somewhere else.

And now I feel a bit better.

*Yes I know it isn’t “Theft” but rather infringement, nothing got stolen from anyone, I still have the original. But Music companies like to use stealing and theft in their headlines and I kind of agree, it does make for a more dramatic start to the post, looks better on Twitter too :)

Versions of 18 things still flying around the web can easily be found via Google, like here and here:

…and now my photo is splashed all over goodness knows what servers on the internet.

Dan Catt works worked at the Guardian doing some serious (and not so serious) number crunching. Previously he spent 4 years working at Flickr as a frontend engineer (+stuff), from when it had newly moved to California until about 4 Billion photos later.
He is now also freelance and available for hire for fun art based coding projects via his website.

You can follow Dan Catt’s blog here, his tumblr here and his twitter here. This article was originally published here.