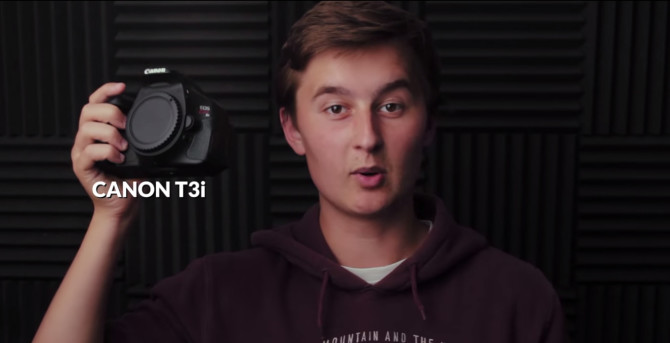 Let’s face it, with how rapidly camera manufacturers are improving digital technology and releasing new and improved cameras, it’s hard not to get caught up in gear acquisition syndrome. At some point, you may have even caught yourself saying, “If I just had (fill in any piece of equipment here), my photography would be so much better.” I’ll be the first to admit the thought has ran through my mind at least a couple times. That’s exactly why this poignant video from filmmaker, Simon Cade, hits home so much.

If you were to take a look inside Cade’s gear bag, you’d find the same CanonT3i and Canon Elph 300 that he’s been using since the beginning of 2013. Yet, despite shooting with older and (what could be considered) entry-level gear, upgrading to a new DSLR isn’t even on Cade’s radar. And, the logic he uses to battle the nagging desire to spend tons of money on new gear and gadgets seems to be pretty flawless.

“My theory is that the people who don’t prioritise equipment & technical things end up being successful enough that they shoot on high end gear just because they can. It’s definitely not the equipment itself that makes them great / successful.”

Have a listen to Cade as he expands on his theory and shares with you all the reasoning he’s put behind it. It’s well worth a watch, so let’s dig in…

Still feeling bad about shooting with an older camera? Here’s some further inspiration from Cade–a sample of the work he’s curated from various filmmakers, all who used older or less expensive gear than one might expect from such productions. All of the cameras mentioned below can be purchased for less than $1000.

Mostly shot on a Canon T2i…

Smith’s early work, including Waffles, were shot on a Canon 7D.

« My Photography Workflow With Smugmug, WordPress & The Creative Cloud
Let The Ethereal Macro Photography Of Joni Niemelä Transport You To Another World »