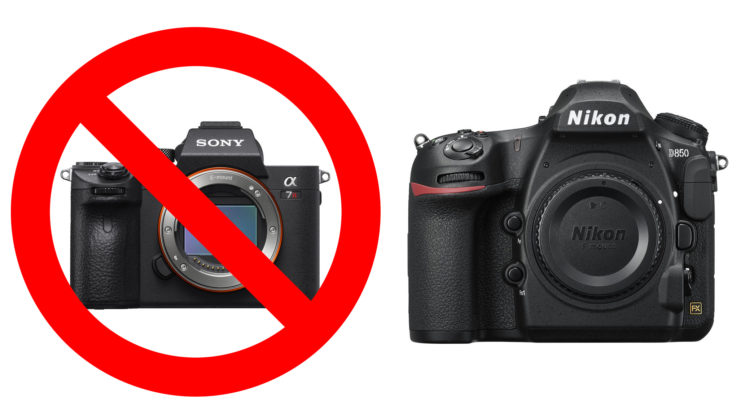 While many photographers are switching from DSLR to mirrorless, photographer Clifford James has decided to make it the other way around. After using Sony mirrorless cameras for about seven months, he decided that a Nikon DSLR is a better choice after all. In this video, he shares his experience and the reasons why he changed back to a Nikon DSLR after shooting with two Sony mirrorless cameras.

Clifford explains that he was shooting with a Sony a7III and a Sony a7RIII for about half a year. But then, he decided to get a DLSR again and he opted for a Nikon D850. Of course, the video is based on personal opinions and impressions, so take it with a grain of salt. But here are Clifford’s main reasons for making a switch back to Nikon DSLR.

According to Clifford, the noise in Sony cameras looks unusual when you crank up the ISO. There’s a strange swirly effect in it and the colors can be a little bit strange, too. It depends on how high you push the ISO, but it would happen that he ended up with unusable images. On the Nikon camera, you also get a lot of grain if you bump up the ISO. However, Clifford describes it as “cleaner” and “more natural,” which helped him create more photos that he could deliver to clients.

How the exposure looks in the camera is one of those things no one tells you when you first make a transition from DSLR to mirrorless. Clifford explains that with Sony the images always looked well-exposed in camera. But when transferred onto a computer, it would turn out that they were underexposed. He adds that this doesn’t happen with Nikon, so he made the change after all.

I guess you can always check the histogram to make sure that your photos are correctly exposed in the camera, because the EVF can apparently lie to you. But, it’s probably faster and simpler to rely on what you see in the camera, without additional checks.

Finally, Clifford explains that Nikon lets him shoot in bad weather conditions, considering how tough it is. Indeed, the durability of Nikon D850 is tested in pretty extreme conditions, and it can take a lot. It can take a lot more than Sony, Clifford adds. Plus, to him the ergonomics is beret and the Nikon D850 simply feels better in hand, even though it’s heavier.

Personally, I only took a Sony mirrorless camera for a very quick spin, and I didn’t have the opportunity to form a thorough opinion about it. I only know that Nikon feels much better in my hands indeed, just like it does for Clifford. The good ergonomics is even said to also be a trait of the upcoming Nikon mirrorless as well. Of course, all this is based on personal impressions, and what’s good for one photographer doesn’t have to suit the other. However, if you’re thinking of making a switch, videos like this can help you take everything into consideration and make the right decision.

[I Changed Back to Nikon After Sony | Why? | Clifford James]

I switched from Canon to Sony a year ago. Here are five things I miss (and five that I like)