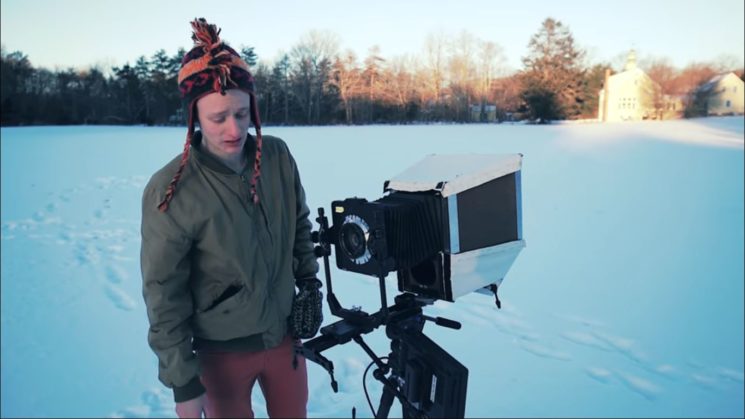 We’ve seen a few remarkable experiments with large format cameras. But young photographer Zev Hoover added something new to it: motion. He made a working 8×10 large format digital video camera, most likely the first of its kind. He shares a video he shot on this unusual camera but also talks a bit about how he made it.

Zev’s camera is a pretty unusual mash-up. He used an old large format camera mounted onto a cheap video slider. It allows him to smoothly rack focus while he’s shooting. He uses a Ukrainian large format lens, which projects a large image onto a white plane inside the camera. The plane is made of an artist’s palette, a matte, white material. Zev says he experimented with a lot of materials and this one works best.

The shooting camera is a Sony a7s with an Irix 15mm f2.4 Firefly. Zev pops it on the mount, and it captures the screen. Since the camera is off-axis from the primary lens, he applied 12mm of shift, so he can shoot off-axis without getting any perspective issues.

Finally, Zev also adds a monitor and shoulder mounts the camera. He changes focus by moving the bellows on the video slider.

Although this camera doesn’t feature a medium-format sensor, it has the beautiful feel of the vintage 8×10 camera. It’s certainly a unique build, and Zev’s made a fun video with it (hopefully, he’ll make some more). You can read a bit more about this camera on his blog. Also, make sure to follow his work on his website, Flickr, Instagram and Facebook, he makes some great photos, too.

« The definitive guide to focal length, perspective, and why “zooming with your feet” is nonsense
7Artisans launches 12mm F2.8 and 35mm F1.2 APS-C lenses, both under $200 »