Apparently I have a thing for making dragons. It’s not surprising, seeing as I grew up collecting them and have always been a proud fantasy-nerd. For those of you who don’t recall, I previously created a baby dragon in Photoshop from pictures of lizards, which you can check out here. I had so much fun doing it the first time, and apparently exploded a lot of brains with my creature-creating prowess.

I was thinking it was about time to attempt to cause some more mind explosions, plus I guess I just love dragons. I decided to make things a bit more interesting this time around and challenged myself to create a creature out of sticks rather than animal pieces. I feel I successfully completed my mission.

Atop this galloping beast you’ll notice none other than photographer badass Niall Scanlon. I took the shot of him at the last photography meet-up I hosted. (Check out his work right now. Right. Now.) I had asked him to sit on a rock formation and pretend he was riding “a creature made of sticks.” I had intended for the stick monster to be more of crouching-feline-shaped-critter, but I just couldn’t stop myself from accidentally making a dragon. Sorry not sorry. The process of creating it was actually quite similar to the first time I made a dragon, except I didn’t have to go digging around for all the right lizard bits and pieces. I ended up using some extra shots I snagged during this shoot in Key West. I knew they would come in handy one day. (Thanks past Robert!) 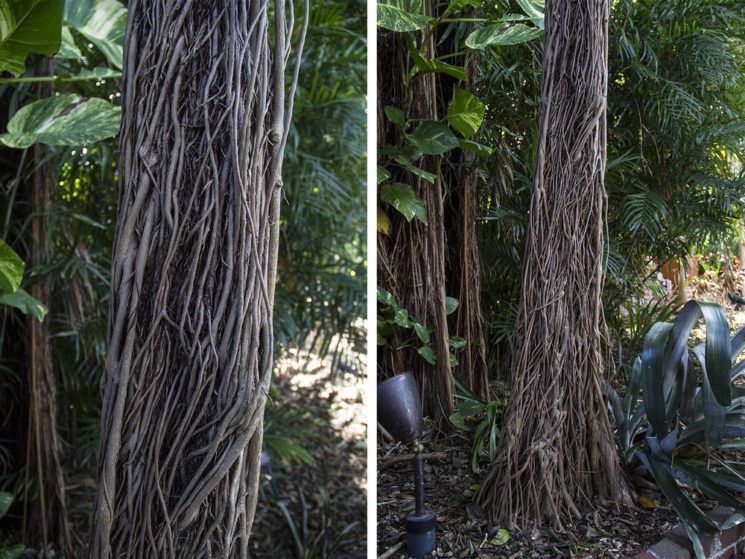 I decided that since (for the most part) my images tend to involve someone fairly stationary, that it would be cool to create a picture with a lot of action and movement. I’ve said time and time again that I attempt to create works of art that look like they could be single frames plucked from some over-the-top fantasy film. The intention for this image was to do the “plucking” from an action scene. I envisioned Niall needing an “escape vehicle” of sorts and using a magic spell to gather the sticks around him to manifest a ride, and was now speeding off to safety atop his newly crafted beast. Key word: “speeding.”

The first thing you can do to create motion in an image is to think about the pose. For this shot Niall’s pose didn’t need to be SUPER dynamic because his mount was going to be doing the majority of the moving. So I just had him hunch over a bit and, well … try to look like he was riding something going fast instead of just sitting on a rock. Rocks are not all that fast, usually. Your subject will probably not always be riding something (but who’s to say), so you might need a more snazzy pose to create the desired action. Either way my point is that if you’re intending to add some motion blur to emphasize action, make sure you’ve actually captured an action-y pose to begin with. Wait, motion blur you say, Robert? Yes, let’s chat about that, shall we? Indeed. 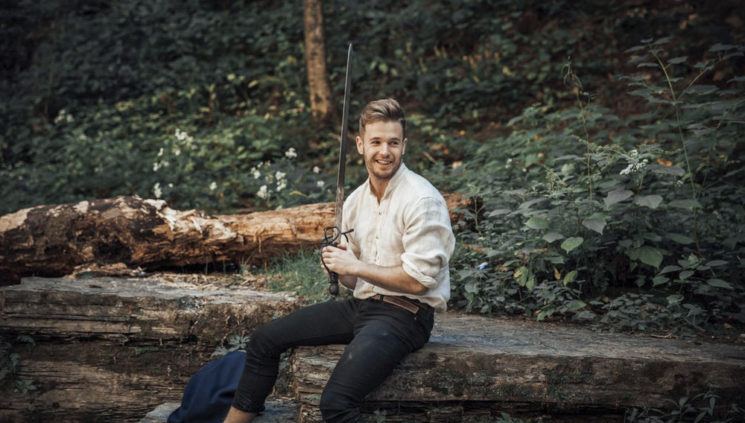 A super easy way to add motion to an edit is to apply a motion blur filter. I know it’s so obvious it seems silly, but there is definitely more to it than just slapping a filter on top of your image. First of all you have to decide what is in motion and what direction it’s going in. For “The Retreat” I knew that he (the dragon … well subsequently Niall too, I guess) would be charging towards the left side of the frame, so the angle of my motion blur was easy enough to figure out. I was attempting to emulate the look you get when you pan the camera following along with a moving subject. For example, if you were to try to take a picture of a passing motorcycle, you could track it in the center of your frame, then when you snap the photo the motorcycle would be more or less crisp and the background would have the motion blur 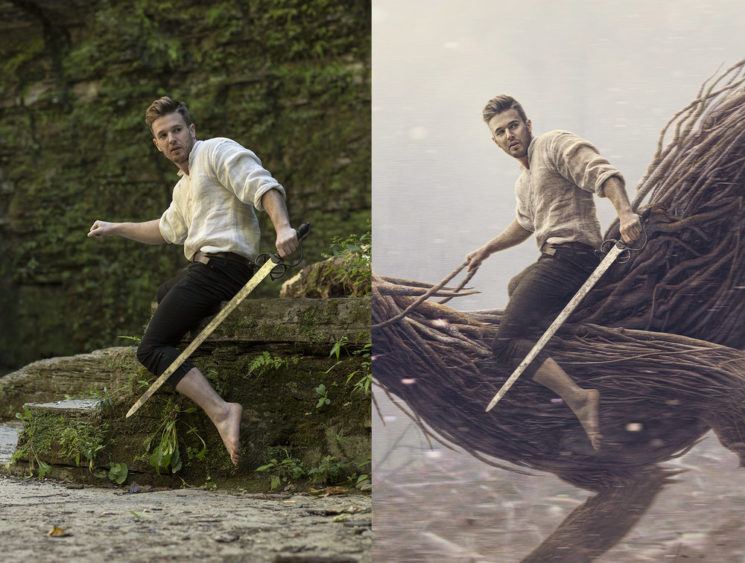 It won’t always be the background that needs the blur, though. Let’s say you were trying a running pose (and not going for the tracking-pan-blur-effect); in that case you could have a sharp background and apply a motion blur to the subject rather than the background. It would be as if your camera was locked down and the model was running through the frame. Sometimes just adding the motion blur to one arm that is reaching for something or maybe a leg that is kicking can add just that extra little bit of realism. It doesn’t even have to be a LOT of motion blur to get the desired effect. Also, you can have a crazy action-packed image with zero motion blur and that is TOTALLY acceptable as well. 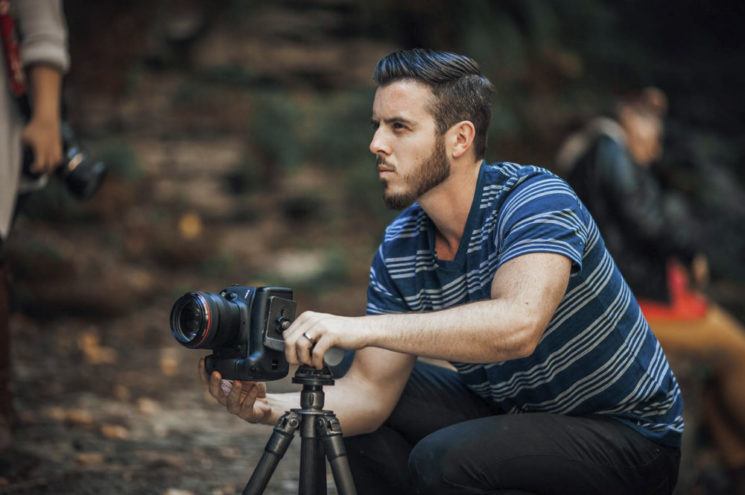 Speaking of not a LOT of motion blur, you have to try to find the balance between blurred and not blurred. If you have TOO much you lose all the lovely detail you’ve (hopefully) captured. When used “correctly” though, it can really help you focus the viewer where you want them to look, enhancing the important details … Usually this means the face, provided there is a face in your photo. Basically what I’m saying is you usually don’t want to just motion blur the whole picture all at once. For “The Retreat” I did my motion blur many different times at varying amounts to different parts of the image. Feel free to absorb the below image for a visual knowledge-y explanation of the varying amounts of motion blur applied to different areas… (Click to enlarge. CLICK IT!) 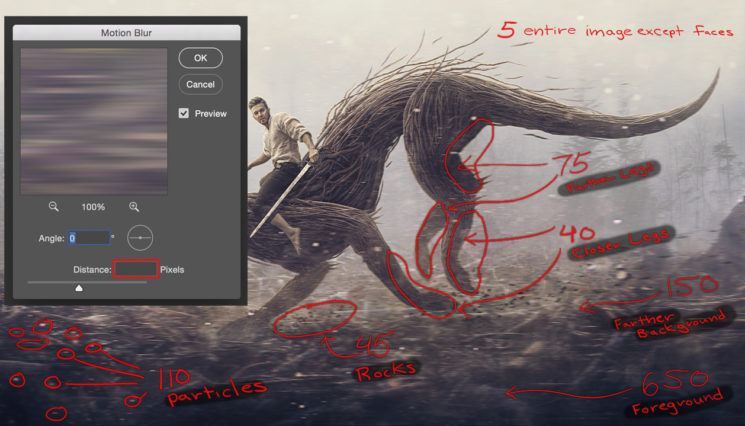 For the background I did a stronger motion blur filter than I did for the rest of the photo because it’s what I wanted to be “moving” the quickest. Also, pro tip, if you are doing a panning background blurring like I did, don’t blur the entire background evenly. If you think about looking out a car window, the objects closest to you appear to be moving much faster as you wiz by them, whereas the horizon line/things farther away are still moving but not nearly as fast. SO, you’ll notice that I’ve blurred the foreground (closer to the camera) much more dramatically than the trees and things farther off in the distance. Because science. I applied the 150 pixel blur to the background that’s a bit farther away (as noted above), and then masked most of the blur away from the trees in the farthest background. 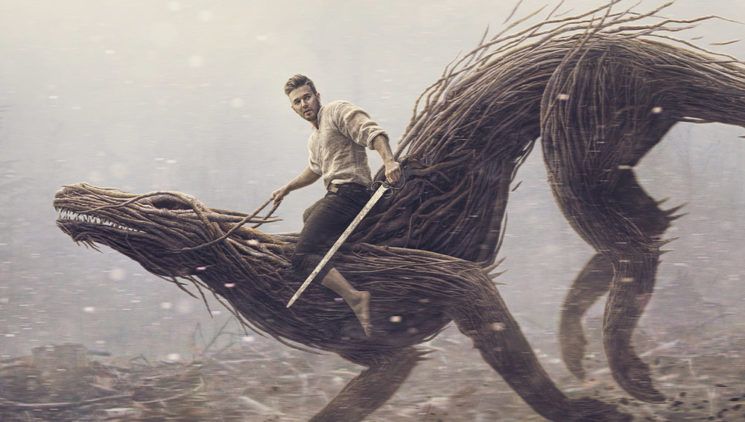 I also made a loose selection of different areas of the dragon’s legs with the lasso tool, feathered by a bajillion, and then applied the motion blur to just those areas since the legs would be in a bit more motion than the entire body. One last thing I did in the motion blurring department at the very end of my editing was to duplicate and merge all my layers (“stamp visible”) and then apply a slight motion blur to the entire flattened image. I know I just said don’t blur the entire thing evenly in the last paragraph … but don’t listen to me … well do … or, I mean ….. anyway this will just blend all of your edges together a bit more believable, and then you can use a layer mask to bring back areas where you really want things to stay sharp, like the face of your model … and your dragon’s face too, probably.

I feel I’ve only barely scratched the surface as to how much went into creating this edit, or even just how many different ways you can blur and warp things to create some action packed … action. I’d like to send out a huge thank you to my buddy Niall for getting his butt to my meet-up all the way from North Wales. (That’s a long way for a butt to go!) Also a giant “you’re freakin awesome” to Sarah Ann Loreth for donating the incredibly-spooky-foggy-fantastically-perfect background image!

How to create realistic perspective motion blur in Photoshop

Can you spot which video has fake motion blur?

Google Pixel 6 will remove motion blur from faces
« Crop vs. full frame sensor: how different cameras perform with the same lens
I was in a refugee camp with my cameras when Trump shut the borders. Here’s what I saw »