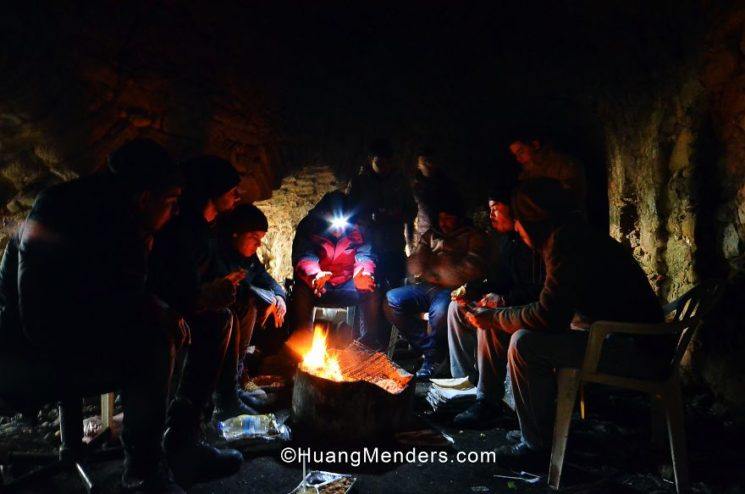 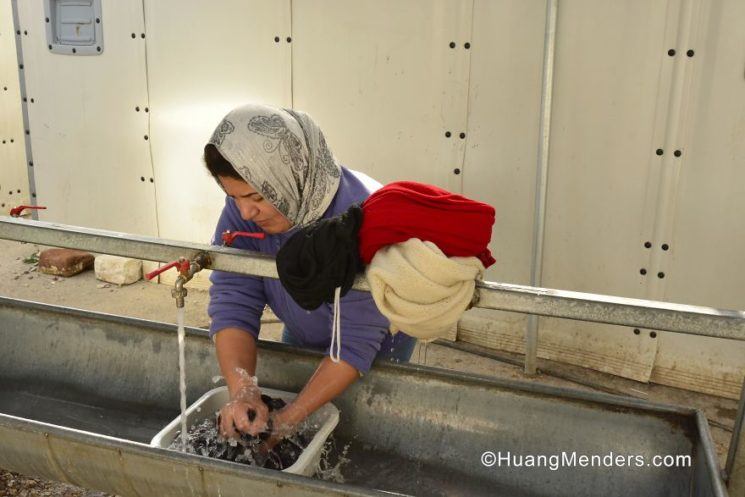 Everyday tasks are made significantly harder due to the shortage of basic services and infrastructure in the camp. A woman washes clothing in the outdoor communal sink, scrubbing each piece with her bare hands in ice cold water. 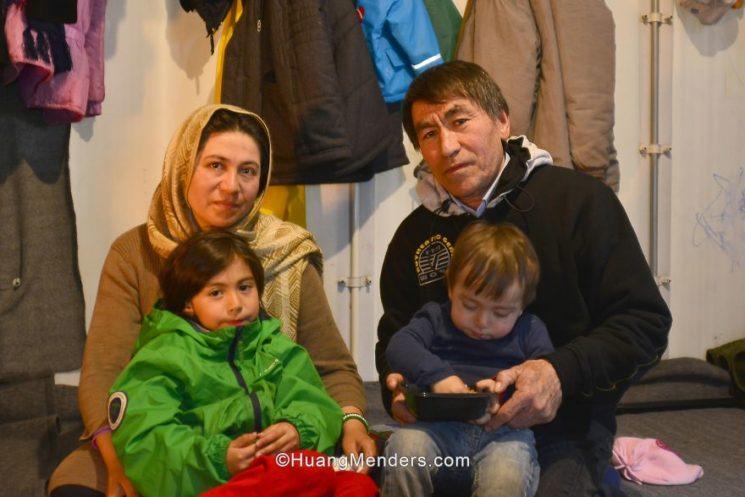 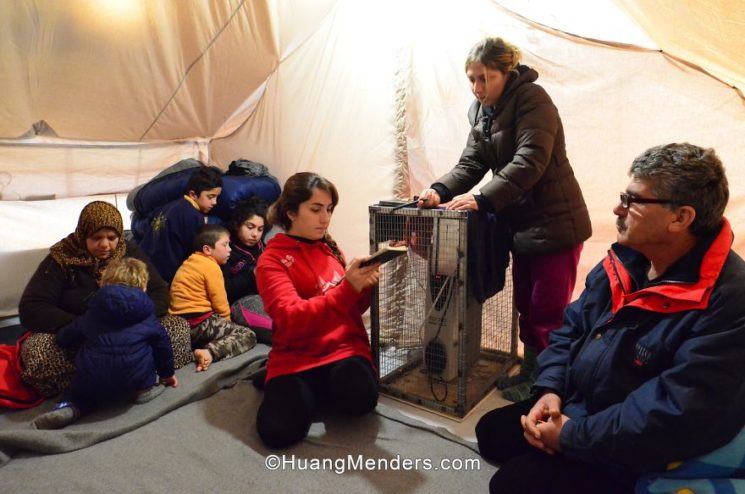 Mizar and Abella fled Syria with their 5 children and other relatives.

This winter, Chios island experienced its coldest winter in 40 years. 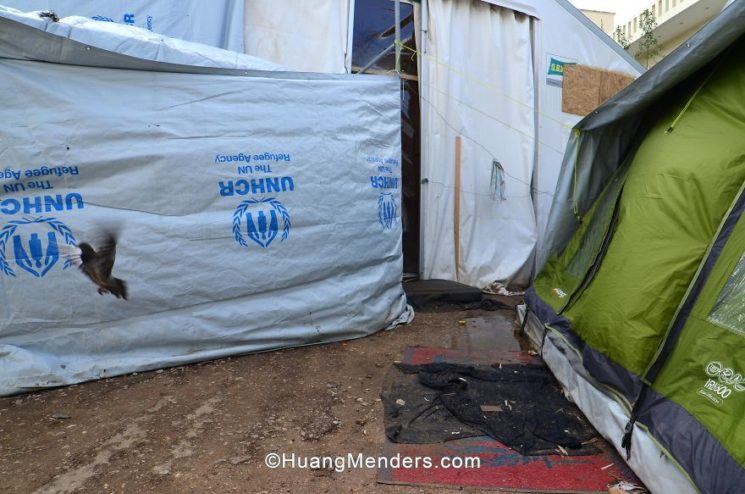 Refugees are living in communal buildings, plastic buildings or cloth tents. Greece’s winter is similar to the East Coast of the US, with freezing temperatures and biting wind blowing constantly from the Aegean Sea.

Typically arriving by dangerously (and often deadly) overcrowded boats, the refugees bring minimal personal belongings – often only the clothes they are wearing. 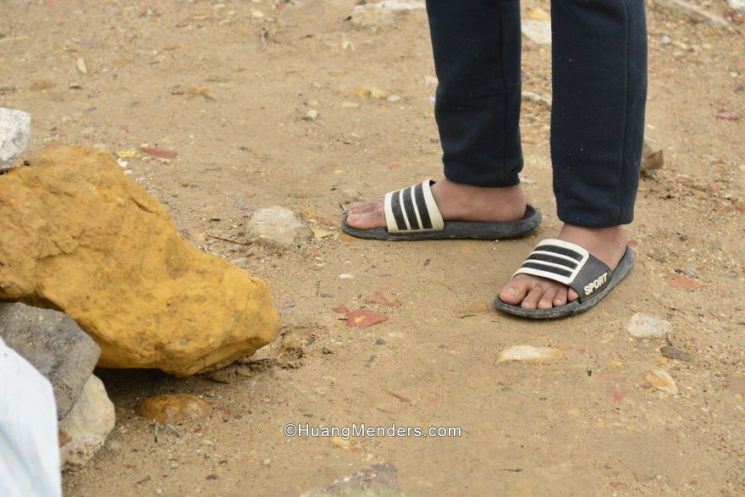 Donations of clothing and essentials are limited, especially given the extensive periods of time (months and now years) refugees are detained in the camp.

Their makeshift tent is erected against a boat on the shore and debris. 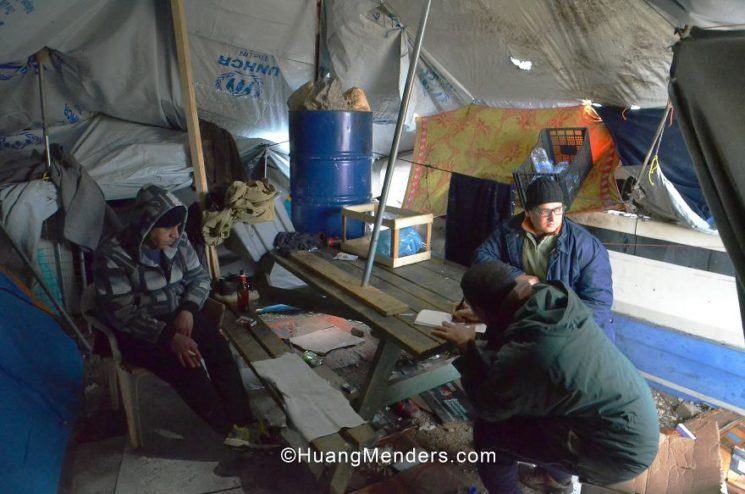 Amer, Asahid and Malil fled Palestine, Morocco and Algeria, respectively and have been living in Chios for 2 months. Under the plastic United Nations tarp each man sleeps in a 3-season fair weather individual tent.

“I do not have a homeland.” 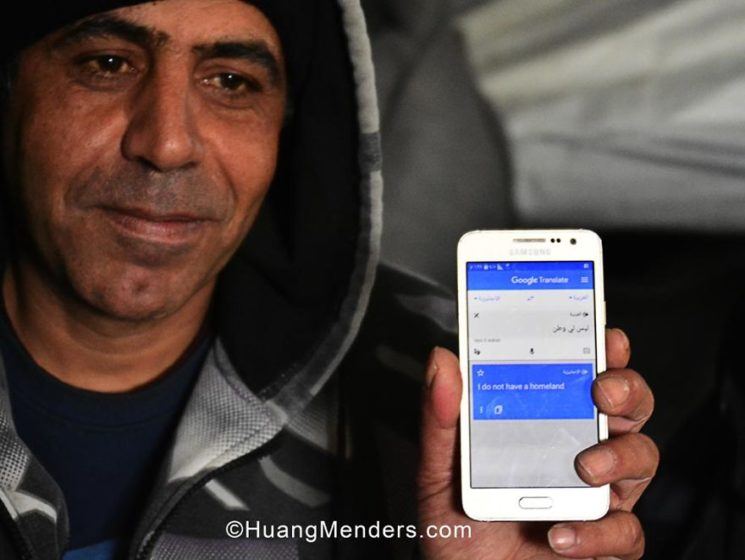 Amer uses Google Translate to communicate between Arabic and English. Amer worked in construction in Palestine. Now he wants to go to any country that is “safe”.

Dunya is 4 months pregnant and living in a plastic tent with her husband, Amen. 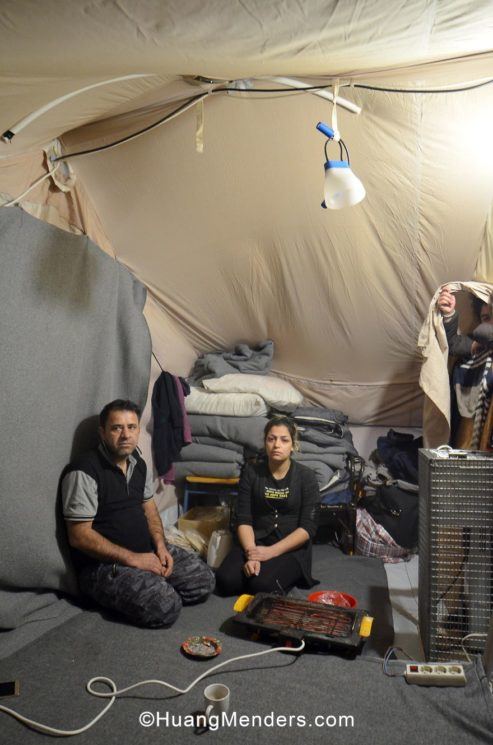 The tents have been “winterized” by placing plastic tarps over them. Rainwater seeps underneath the tents and soaks up into the blankets and other materials on the floor and remains continually wet in the cold weather.

In January the Souda refugee camp was reported to house approximately 1,200 refugees, in between an ancient barrier wall and a residential neighborhood. 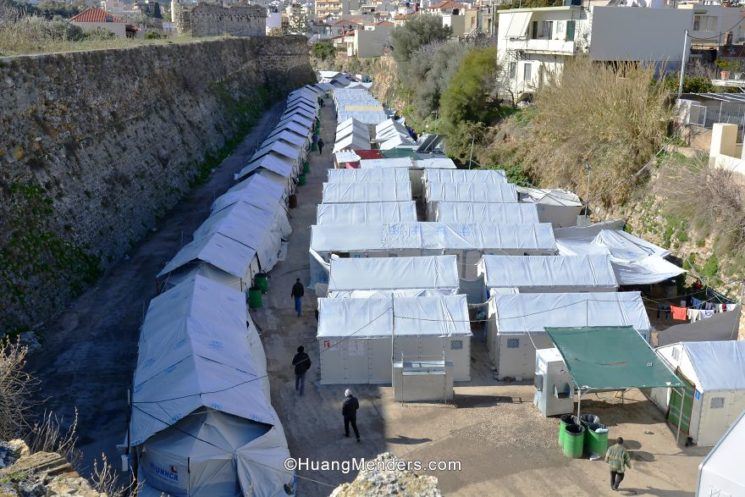 In November 2016 the camp was attacked by fascists/populists hurling boulders down onto the tents and throwing Molotov cocktails, setting fire to tents and storage facilities holding basic human necessities such as clothing and blankets. The UN Refugee Agency (UNHCR), Greek government and local municipality have the major challenge of managing this and other camps across Greece.

Men seek refuge and warmth in the tunnels of an ancient fort alongside the camp.

Many young men fleeing the violence of their home countries are living in Souda refugee camp and others across Greece. 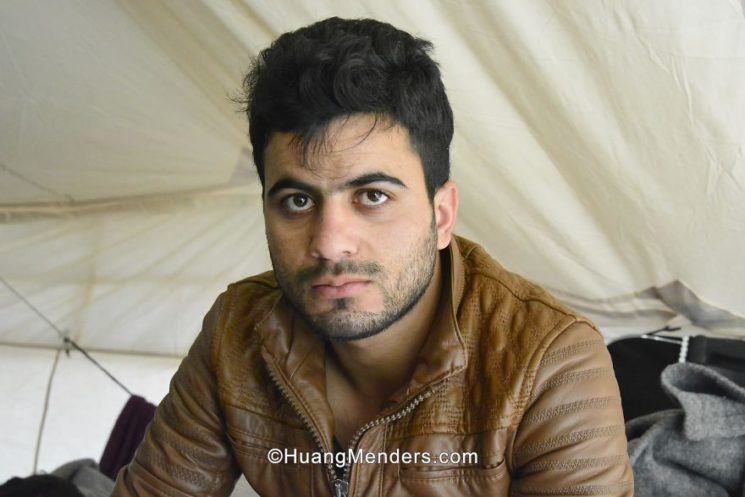 Donations are often inconsistent for the needs of the refugees. 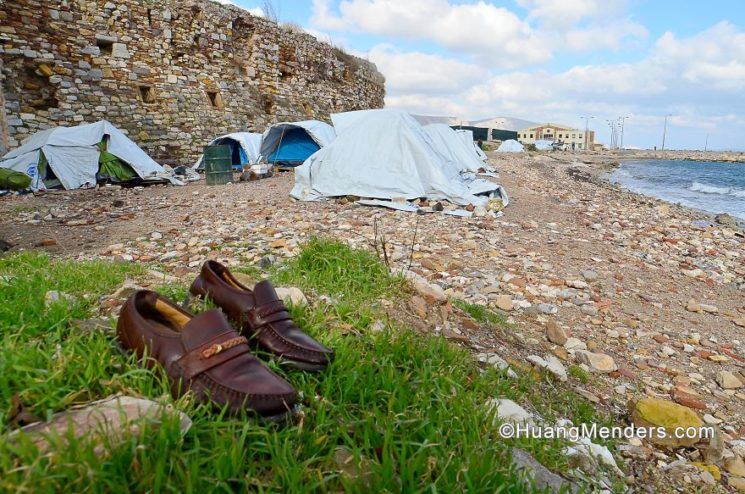 A pair of fancy men’s dress shoes dries in the sun after being soaked by the rain from the previous days.

The graffiti says: WE ARE REFUGEES. NO ISIS 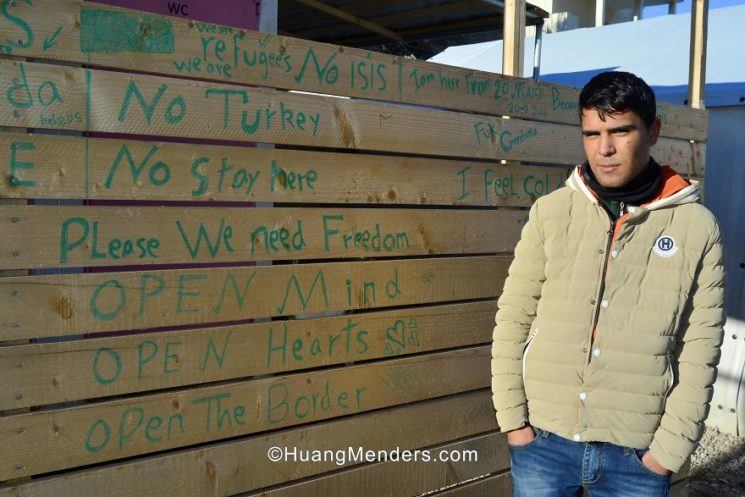 NO TURKEY
NO STAY HERE
PLEASE WE NEED FREEDOM
OPEN MIND
OPEN HEARTS
OPEN THE BORDER
The thin fence providing limited privacy for the women’s toilets is covered in messages for the outside world. Before being categorized a faceless, generic “refugee”, Abdrraezak was a software designer and computer programmer who speaks 5 languages and multiple computer languages. He is living it the Souda refugee camp, hoping to go to any country that is safe.

Refugees are permitted to move about the island but are prohibited from leaving to other destinations of the island. 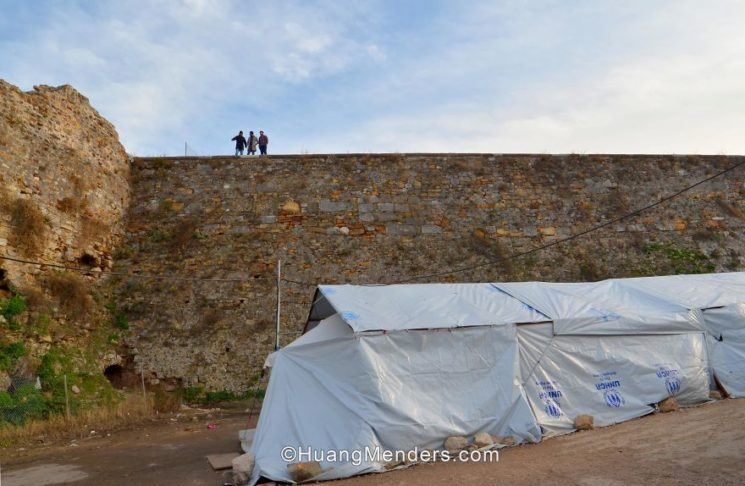 Mohadi, a 1-year-old boy from Afghanistan, is now a refugee with his family. 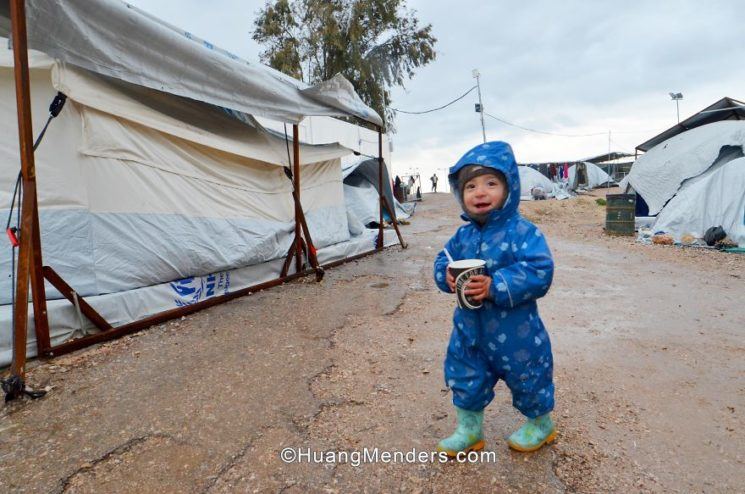 Daniel Farber Huang collaborates with Theresa Menders on numerous documentary photography projects. They have been collaborating successfully over the past 20 years, and Huang+Menders’ documentary photos are included in the permanent collections of numerous fine art museums and historic institutions across the US. You can see more of their work on their website. Also, follow them on Instagram, Flickr and Twitter, and like their Facebook page. This article was also published here and shared with permission.

The Power Of Faces: Looking at the global refugee crisis

This is what a lighting boot camp test looks like

Drone sightings shut down Gatwick airport – up to 100,000 passengers delayed
« How to use motion blur to create action
Is cheap gear really cheap? This is what it can cost you in the long run »