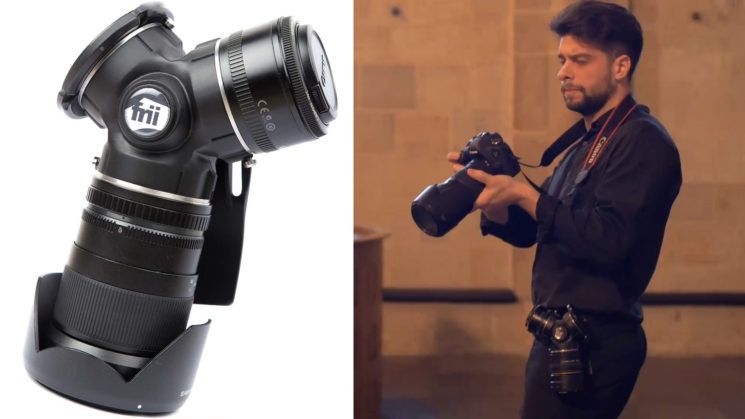 You do see some strange things popping up on Kickstarter. This one doesn’t launch for another 17 days or so, but I think it definitely qualifies as a little strange. It’s the TriLens Holder from a company called Frii. On first glance, it might seem quite useful. A neat new idea that could be a valuable time saver if you’re shooting something like a wedding or other event.

You’re not going to be using the same lens all day, and you want to have your other go-to lenses close at hand. It is actually a pretty neat idea, although not a new one. It’s a lot like the Lens Flipper, except it holds three lenses instead of two. And it also attaches to your belt instead of using a strap or attaching to a backpack. But that’s a lot of weight tugging on your pants all day.

Like I said, it is a neat concept, but I just can’t see it being all that practical over just carrying two bodies with your two most used lenses. Then switch out for the others in a small bag as needed. And what about the people who don’t wear belts? Not all photographers are men, and even dresses that do have belts typically don’t support this kind of weight.

Still, if you like the idea and want one of your own, the product launches on Kickstarter in 17 days. You can find out more about it and sign up for an alert when it goes live on the Frii website. There’s no word on price, yet, though.

The Lux Is A Beautiful Waist Level 120 Camera, You Can Build It Too

« No location? Create it in Photoshop!
How to turn your Mavic Pro into a handheld gimbal camera »