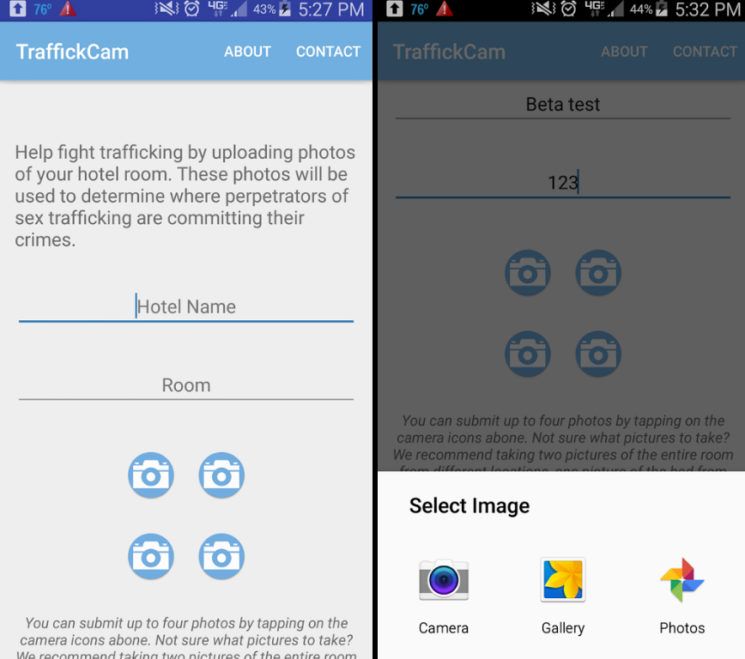 Human trafficking is undoubtedly a huge problem on a global level. There are many organizations trying to solve it, and now there’s an app that helps all of us join this fight. TraffickCam is an app that allows users to contribute to the database of hotel rooms all over the world. All you need to do is snap a few photos of the hotel rooms in which you stay on your travels.

But how does this help? Well, sex traffickers make their victims pose in the hotel rooms for advertisements. The database of hotel rooms can help investigators determine where exactly the photos were taken. This way they can track down the traffickers, arrest them and save the victims.

The TraffickCam app is a project of the Exchange Initiative, an organization which fights human trafficking. It allows any individual to contribute to the fight against human trafficking. So, what can you do? It’s very simple: take some photos of your room while traveling. The developers suggest taking two photos of your hotel room from different locations. You should take one photo of the bed from its foot, and one photo of the bathroom from the doorway.

An important thing to remember is that you should capture as much of the room surface as possible. Also, don’t include people in your photos. All photos with people in them will be automatically rejected by the app.

There have been some concerns about the users’ privacy. It’s good to know that the app doesn’t use any personal information, but it only stores the phone’s GPS data. Also, as I mentioned, photos with people are not included in the database.

Some people wonder why the hotels don’t simply upload photos of their rooms. True, many photos in the database were taken from the websites of hotels. They have the photos publicly available and it makes it easier. However, there are many hotels, motels and hostels which don’t even have a website. This is where the users can help and create a database of accommodation photos which you can’t find online. Another advantage of this app is that photos users take are more genuine, and resemble those taken by traffickers more closely.

If you are a traveler, you can contribute to the database. You can download the app from Google Play and iTunes, depending on the type of smartphone you are using. There’s also a web app, in case you don’t own a smartphone or don’t want to install the app for whichever reason. Of course, the app is free for everyone and available for users all over the world.

So, will you join the fight? Do you think an app like this is useful in resolving the problem of human trafficking? I’d like to hear your thoughts in the comments.

This new app helps you to create the perfect Instagram poses

Smartphone Photography 101 helps you take better photographs with your phone