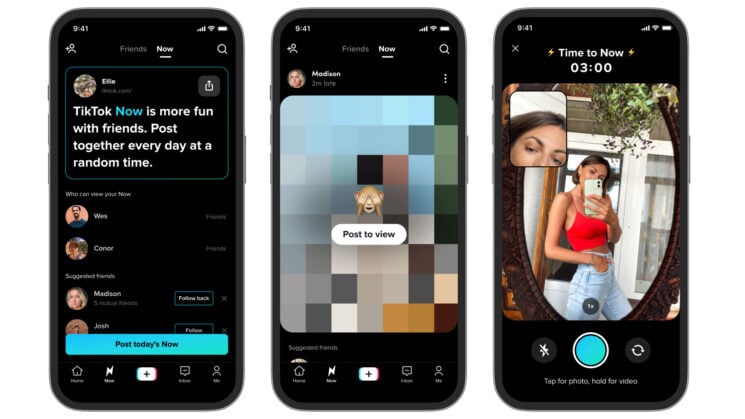 It looks like TikTok isn’t just the app other social media are trying to copy. This time, it’s TikTok that’s copying features from another app that’s been rapidly growing in popularity.

That’s right, I’m talking about BeReal. After Instagram, now TikTok now has its own version of real-time dual camera view. It’s called “TikTok Now” and it lets you share “your most authentic moments” with your followers.

TikTok Now is a daily challenge, just like BeReal’s entire concept. It invites you and your friends to capture what you’re doing in the moment using both the front and the back camera of your phone simultaneously. Just like BeReal, TikTok will send you daily prompts to capture a photo or a 10-second video to share what you’re up to. The only way this differs from BeReal is that TikTok also allows you to share videos, while the “anti-social app” is all about photos.

In the US, TikTok Now can be accessed from the TikTok app. But in other regions, TikTok Now may be available as a dedicated app as well. It looks like TikTok isn’t quite sure how it will unfold, but they want to see how the community embraces this “new” creative format.

In my opinion, the concept of BeReal loses its point after it’s being copied by other major social media apps. The idea was to create an “anti-Instagram” platform that invites people to share genuine moments, and not photoshopped, polished, “perfect” lives that don’t actually exist. It looks like people were eager for something like that, so BeReal’s monthly active users increased by more than 300% in 2022, according to Influence Marketing Hub. It ranked first in the free iPhone apps list, fourth in social media download, and tenth in the most downloaded social media platforms. So, yeah, from now on, TikTok can be your BeReal too.

Two men killed after an attempt to recover a stolen camera