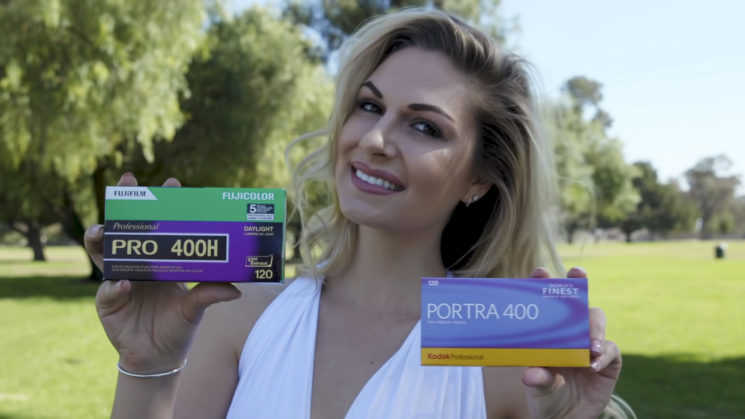 Although meters in digital cameras have come a very long way and become extremely advanced, metering with film often isn’t so simple. With digital, even if your camera’s meter isn’t that great, you can quickly and easily see the results on the histogram to know if they’re right and adjust accordingly. But for film, we need to be a little more sure.

In this video, Jay P Morgan at The Slanted Lens walks us through three ways of metering our shot when using film. Specifically, Kodak Portra 400, Fuji 400H and Portra 800.

Many photographers still often use the Sunny 16 rule with digital. Even if it doesn’t offer a perfect exposure every time, it’s a good starting point. With film, though, it’s a pretty reliable method of getting a good exposure in bright sunlight. The method has been around for decades, and was the common go-to before cameras started having meters built in.

It’s an easy guideline to adapt, too, depending on the outdoor conditions in which you’re shooting.

While it will take some experience to figure out the differences between “overcast”, “more overcast” and “heavy overcast”, it’s always better to overexpose with negative film to be safe if you’re not quite sure. It’s easy to pull that highlight detail back if you need to when printing or scanning.

Use a DSLR or mirrorless camera

This one might sound obvious, but it’s surprising how many people don’t think of doing this. If you know your DSLR or mirrorless camera can give you a good exposure, then why not use it to determine the settings you need and then plug those into your film camera?

Digital cameras do have a tendency to be a little “brighter” than film in my experience. ISO400 on a DSLR won’t necessarily give you the same exposure as ISO400 on negative film, especially when it comes to holding the shadow detail. Dropping the digital camera’s ISO down to 200 overexposes the shot by one stop when you shoot those settings on film. But overexposing negative film a stop or five isn’t really a problem.

Use a handheld incident light meter

Incident meters work differently to the reflective spot meters inside cameras. Reflective meters look at the brightness value of whatever surface they’re pointed at. Point it at a white wedding dress or snow and it will try to expose the shot to make it 18% grey, underexposing the whole shot. Point it at a black tuxedo or in a dark shadowy area and it will also try to expose it to brighten it up to 18% grey, overexposing the shot.

Personally, I use a Sekonic L758DR and a Sekonic L718, and I wouldn’t be without them when I’m shooting film or using flash (even with digital). But I have used all three of these methods in the past, and still use all three depending on the camera I’m using and the needs of the shoot.

What’s your most used metering method for film?

When, why and how to use a light meter to nail your exposure every time