A solar eclipse is always a great opportunity for some stunning shots. Just look at this one… Or this one! While we’ll only see one more solar eclipse here from the Earth this year, NASA’s Solar Dynamics Observatory (SDO) gets to see more.

On 29 June, SDO captured the moon passing in front of the sun, forming a partial solar eclipse. It was only visible from the spacecraft’s vantage point, but NASA shared the image and animation with us here on Earth.

The moon transit lasted between 01:19 and 1:54 am ET. At its peak, the Moon covered about 67% of the Sun and the event lasted for about 35 minutes. As Space Weather reports, the lunar mountains were backlit by solar fire, although it’s difficult to catch while just observing the transit. However, you can see it in this close-up image of the Moon’s limb:

What’s more, Patricio Leon from Santiago, Chile even managed to identify the lunar mountains. As Space Weather writes, “they are part of the Leibnitz and Doerfel mountain ranges near the Moon’s south pole”. Take a look: 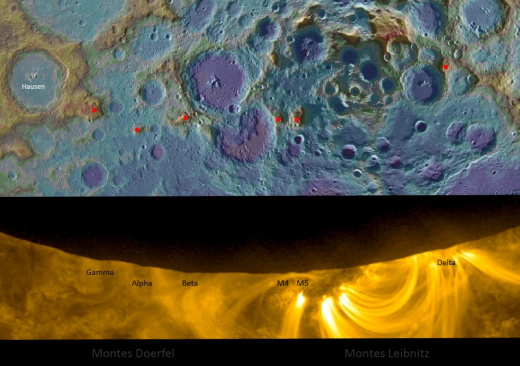 “The top panel is a topography map from the Lunar Reconnaissance Orbiter (LRO),” Leon explains. “Each red dot in the LRO map is named in the eclipse image below it.” Greek letters denote peaks in the Doerfel range; the others are in the Leibnitz range.

[via PetaPixel; image courtesy of NASA/SDO and the AIA, EVE, and HMI science teams]

« Watch: A complete 90-minute video crash course on retouching portraits
Canon EOS R7 shows impressive dynamic range over the 7D but it’s not quite up to the EOS R5 »