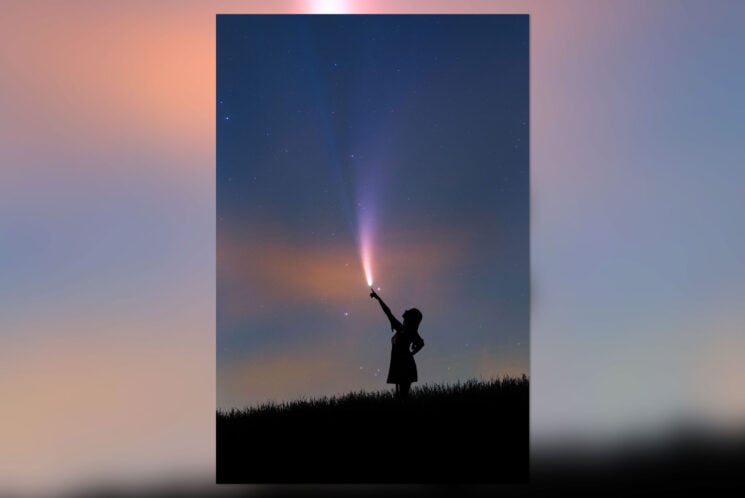 She pointed up to the sky and touched the comet igniting a spark that entwined with her soul and the soul she has created. A bond that is entangled for the rest of eternity and existence. And that very soul that grows, thrives, and lives inside of her is Comet Girl!

It was about two years into my journey of being a night photographer. My knowledge and experience were still fairly average, so taking this shot was a real challenge. Here is the story of my exploration of Comet Girl.

One late evening, I was scrolling through my social feed and saw this image of Comet Neowise. I then saw another one and another one. I was left in disbelief and was sad that I had missed such an opportunity to see a once-in-a-lifetime & rare sighting. Little did I know this Comet wasn’t going anywhere in a rush, at least for a few weeks, and after more research, I soon realized I had not missed my chance to see it and capture it. 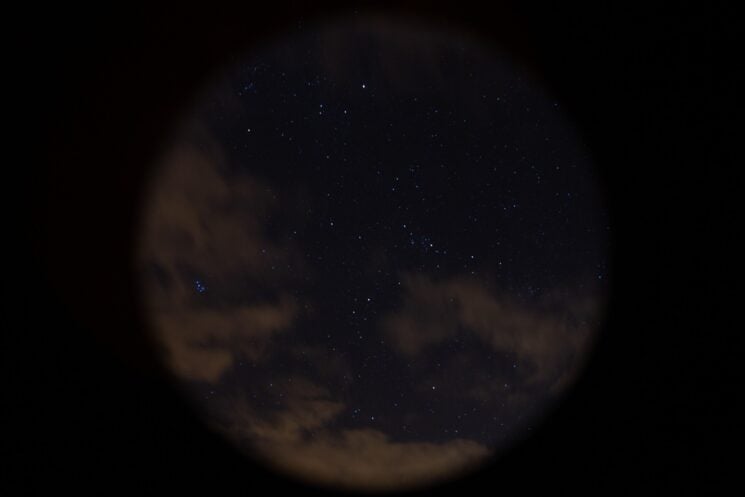 As a reference, this is the first stars photo I have ever taken, not that long ago before Comet NEOWISE came by

I set out the following evening here in my small village and headed up to the hills to see if I could find it. I had zero knowledge of astronomy or locating night sky objects, so the odds were all against me. I searched and searched, but with no luck. I got my camera out and took pictures of the sky, shooting in all directions instead. Eventually, there it was, a faint object that appeared to be a comet. I screamed in joy: I found it. It was such a thrilling moment – witnessing a comet of this magnitude that many will never see in a lifetime.

Now having an idea of where it was, it was time to take some pictures. They all looked terrible, and they were all blurred. I was shooting with a long focal length, so the Earth’s rotation made the stars blur. The Comet was moving as well and, sadly, was blurred too. Luckily, I had some experience with a star tracker. It’s a small device that counters the earth’s rotation, so one can take long exposures and produce pinpoint sharp stars. I still faced one problem: how do I defeat the movement of the Comet? to the best of my knowledge, this was not possible. I had to accept some slight blur of the Comet. On the flip side, that blur gives the Comet a realistic look that shows its movement and path.

After getting home & processing my image, I first sent it to APOD ( Astronomy Photographer of the Day). They had to feature it on their page, I said. And my gut feeling was correct. The following day I woke up, and it was on their Facebook page. 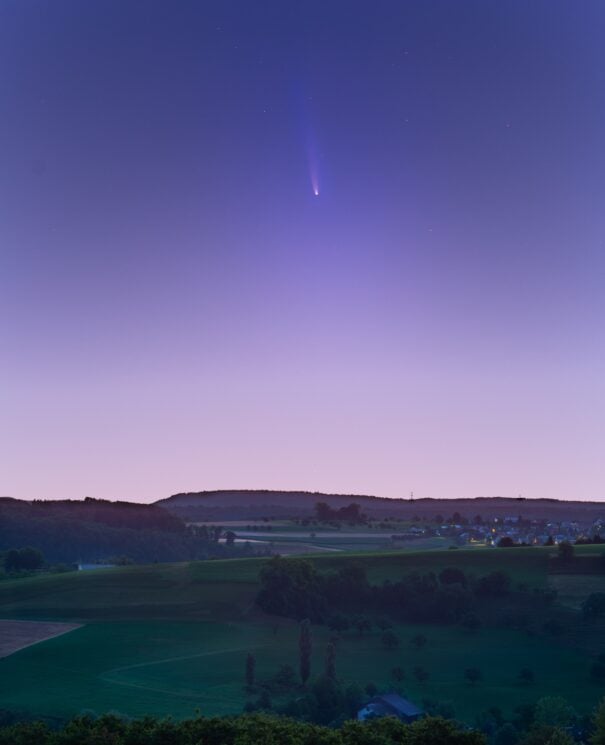 This is my first ever serious photo of Comet NEOWISE

Later that day, I told my wife I had to show her the Comet. Even though she was not a fan of standing out in the cold, she agreed to come with me and see what the fuss was all about.

We set out to hills and spent a fantastic night just observing the Comet with our naked eyes, praying to the universe to bless our baby that was due soon.

After this, I spent the following nights observing the Comet and trying to perfect my technique. After all, it was something I had never done before. Even fellow night photographers with superior experience found it quite challenging. Especially since this kind of event is pretty rare. The last Comet worthy of a discussion was Haileys Comet, which appeared in 1986 and won’t be visible again until 2061.

But for Comet Neowise, we don’t even have a date. The next appearance is unknown, making this (literally) a once-in-a-lifetime experience.

As days went by,  new information was coming in. The news on the block was that Comet Neowise would get increasingly before passing the earth’s orbit. So naturally, this made the experience even more exciting, and day by day, I was more eager to get out and shoot.

My wife is in!

Eventually, my technique improved, and after quite a few nights on the hills, I learned how to pinpoint the Comet in the sky. I also learned I could predict its direction and path. I was constantly on the hunt for new compositions as the goal was to get it close to the horizon with a decent foreground. While walking the hills, I tried moving lower to get the Comet as close to the horizon as possible. And that’s when the idea sparked. 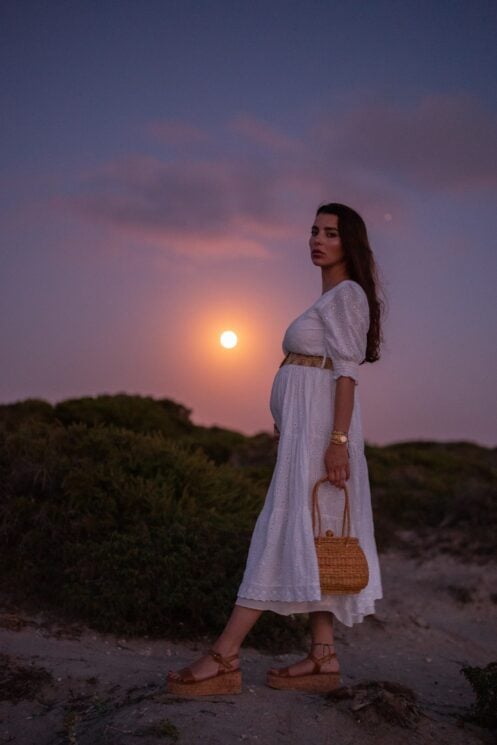 My wife during sunset

I’ve always wanted my wife to be in my night photos, and this shot would be THE ONE. I pictured her standing on the hilltop, pointing to the sky and touching the Comet. I will call it Comet Girl, I said.

My wife was hesitant at first and said, “It’s fine. I already saw the Comet“. Being almost six months pregnant, she didn’t really fancy hiking up the hill to stand in the cold. If we are being realistic, no woman (or sane man, for that matter) would. But still, she made the effort and came out with me and let me capture this image.

I took her to the same spot I had planned the nights before and positioned her on that very same hill. I then had to hike down the hills and look for the specific shooting location that would align perfectly.

We did some practice shots as the sun set and waited for the blue hour to begin. Taking a picture like this is not trivial. The focal length is too long to capture sharp images with long exposures. After some trial and error, I decided to test a very short exposure of her in twilight to keep her nice and sharp, silhouette style. 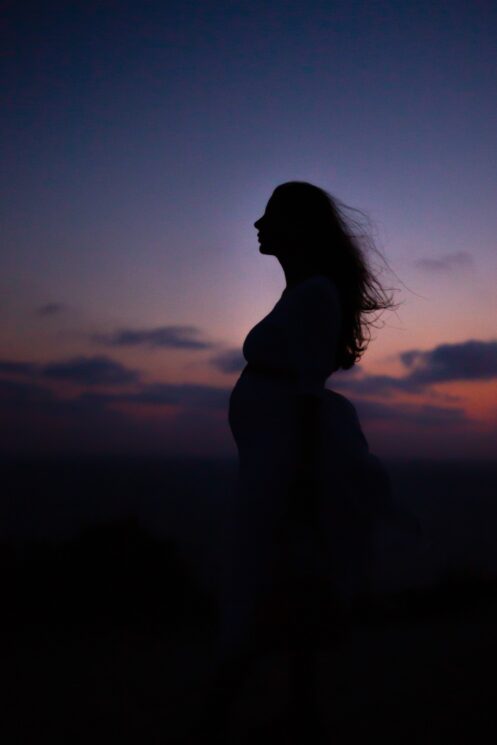 Opting for a silhouette

Eventually, the night got dark enough, and the Comet was in place. My wife pointed to the sky and “touched” the Comet in the exact spot I took the twilight shot. It was at this moment that I knew it was going to work. I then turned on my sky tracker and took several exposures of the Comet so I could stack them in post-processing. Stacking would reduce noise and bring out more details. 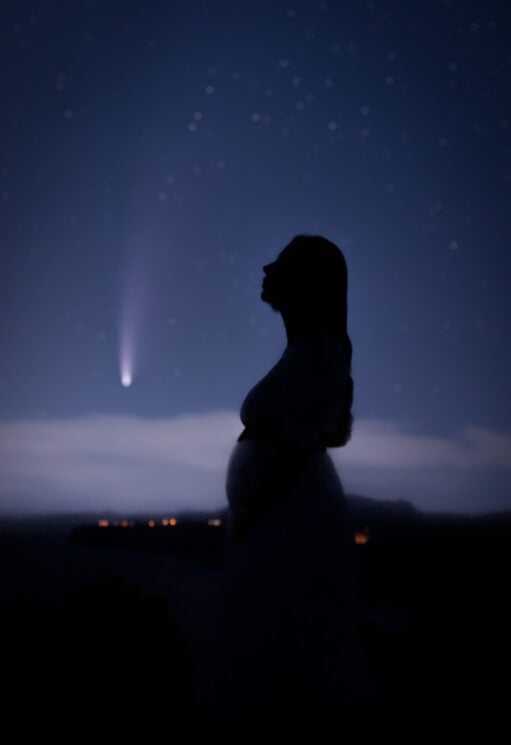 a silhouette and the Comet

Of course, my wife retired to the car after freezing in the cold. I didn’t need long, though, as I only wanted around 5-10 minutes of exposure.

We went home later that evening, and I immediately started to process the photos. I was amazed and filled with joy. I had captured the image I envisioned; it was better than I had ever expected.

When I showed my wife the final photo, she was blown away and soon realized her sacrifice and efforts were worth it. 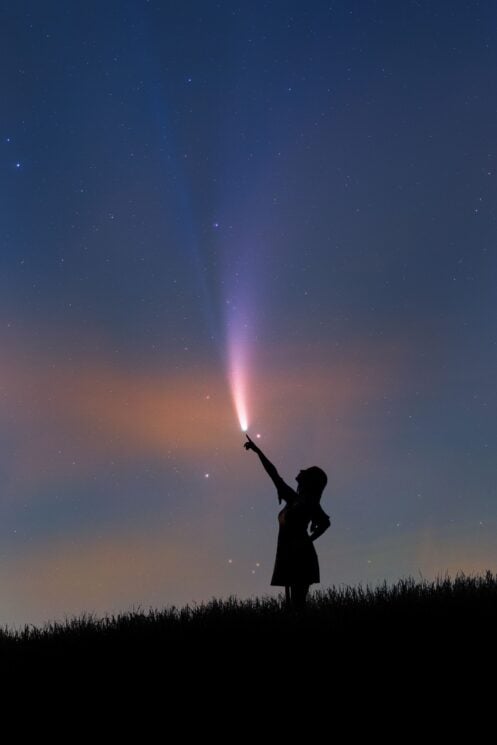 The final edit for Comet Girl

The next day we were leaving Switzerland to head to Corsica, and I was halved about sharing this photograph. On the one hand, I thought this photo was The One. No one shot this view of Comet Neowise. I wanted to keep it to myself. But at the same time, I was dying to share it with the world. Upon boarding a ferry to Corsica, I found an iffy Wi-Fi connection and shared it by impulse. I just could not wait any longer. I sent it to APOD; I shared it on Instagram; I posted it to Facebook; I even shared it in a few groups. In the following hours, we lost Wi-Fi, and it was time to sleep. But my mind was racing, pondering, will they love it as much as I do? What would the world think of my photo, which I cherished so much?

With the little time until Comet NEOWISE went away, I took a few more images and made some more edits of the shot I had taken. 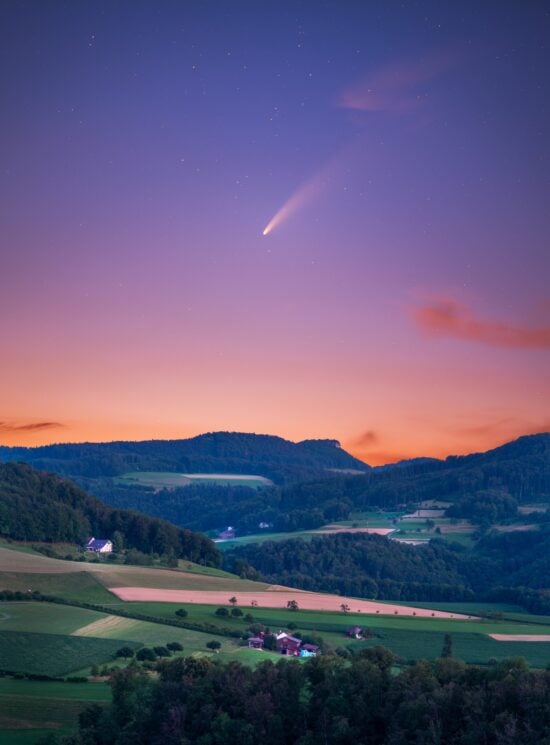 A different shot of Comet NEOWISE 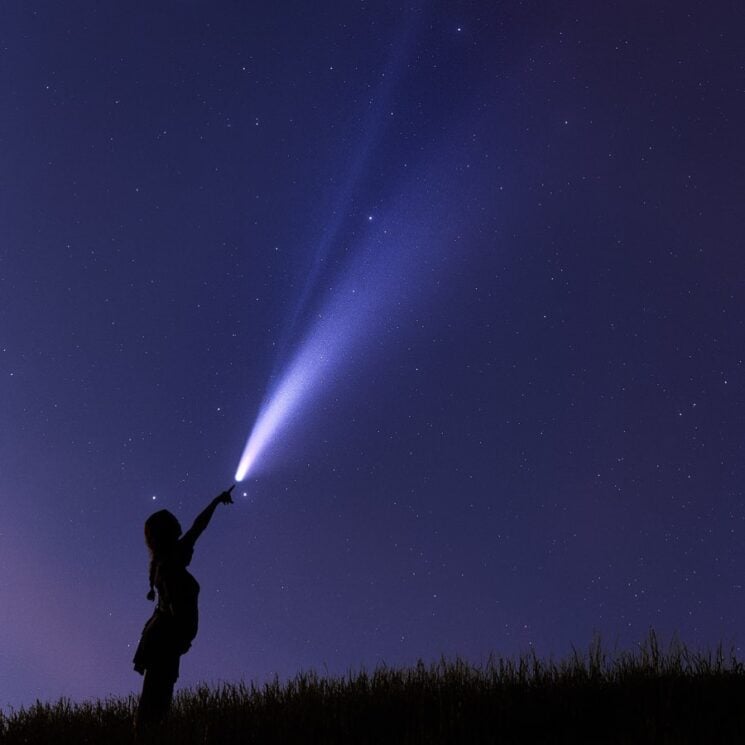 A second edit from the same day

Eventually, the caption of my image evolved as my best friend and Mentor, Ralph Rohner, created a book celebrating the birth of our daughter, Ruby. After all, it was her in the center of that photo. 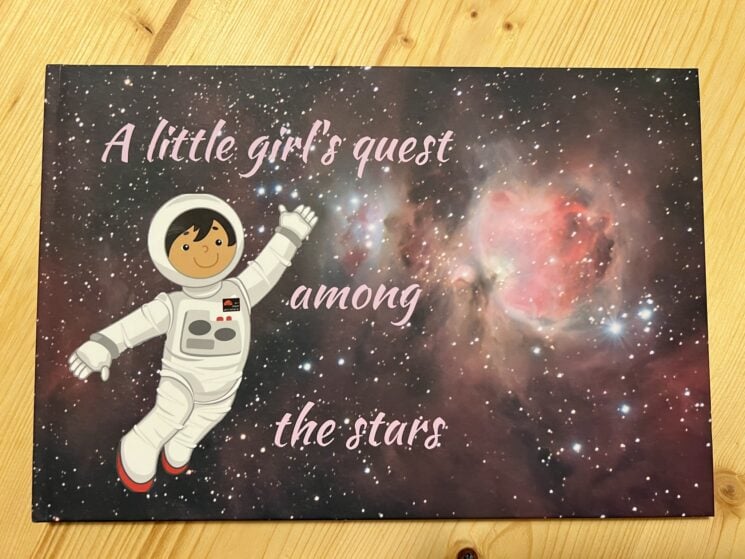 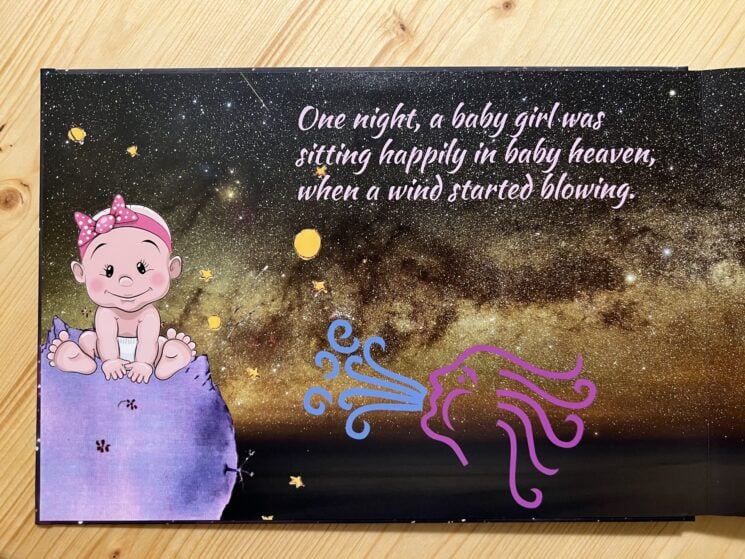 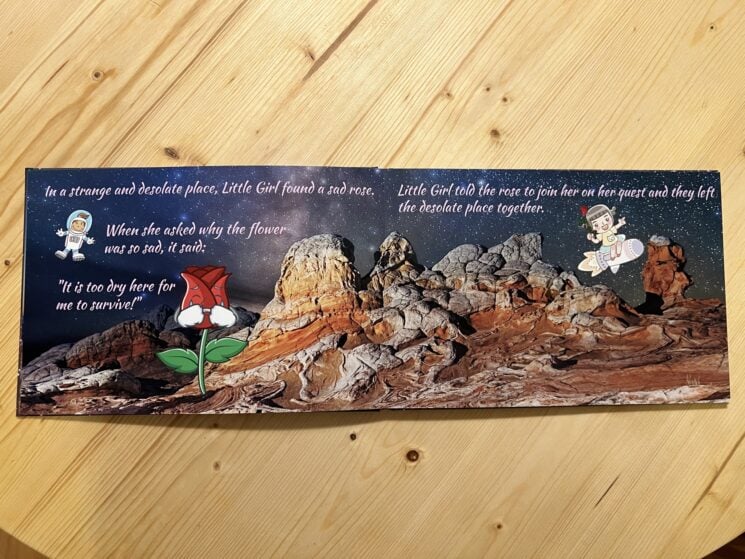 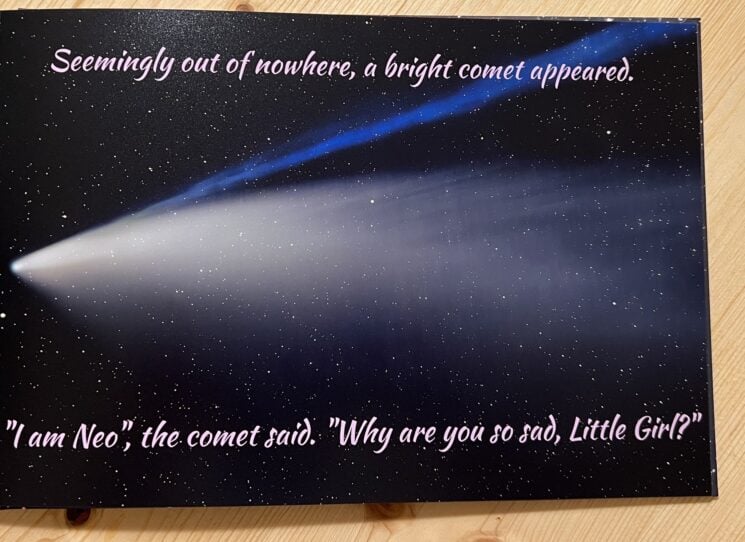 The creativity of this book really took some planning, and it’s a book my family and I will cherish for life. The book describes the story of Ruby as a lost soul in the universe in search of her name, Mommy, and Daddy. It explains the places she traveled and the things she did in order to find her name & leads right up to the moment she meets her mother when the Comet and her finger touch and their souls are entwined.

We created history, an unforgettable memory, and a story that will live on for generations to come!

Benjamin Barakat is an astrophotographer who hosts seminars, workshops & photography expeditions internationally worldwide. He is based out of Switzerland, where he is also a researcher at the highest observatory in Europe, the Sphinx Observatory on top of Jungfraujoch, 3571 meters above sea level. His work has been featured by National Geographic, CNN, BBC, Forbes, Guardian, Vice, and many more. You can learn more about Benjamin and his work on his website. You can also find him on Instagram, Facebook, and YouTube.