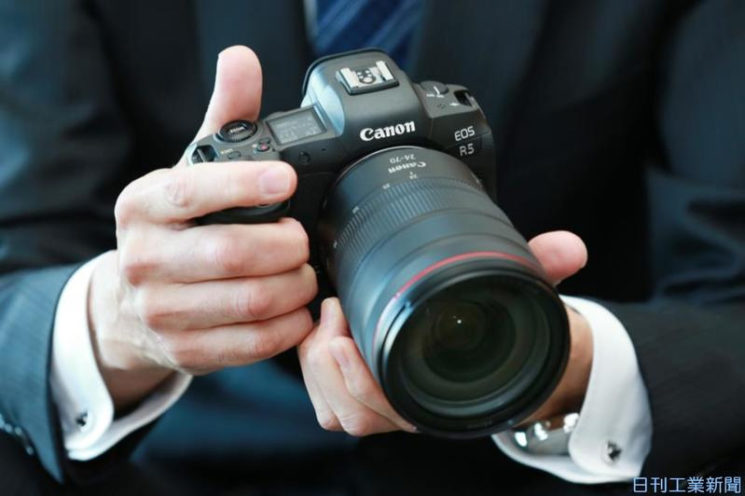 The first photo of the upcoming Canon EOS R5 in the wild has been posted by Newswitch, with the Canon RF 24-70mm f/2.8L IS USM lens attached. As you can see, it looks very similar in design to the EOS R, although perhaps a little bigger. No more specs have been released yet, although Newswitch reports that the camera ist o be released “as soon as possible”, and should start shipping before the Tokyo Olympics begin in July.

A partial translation of the article reads…

Canon has decided to launch the EOS R5, a full-size mirrorless camera under development compatible with 8K video shooting, as early as possible before the Tokyo Olympics and Paralympics. The support system for equipment rental and maintenance is planned to be the largest ever for a sporting event. For professionals, single lens reflex cameras are the main focus, but mirrorless cameras, which are quiet and lightweight, are also being used. The Tokyo Olympics aims to exceed 70% in the use of news cameras.

The R5 supports 8K video shooting, high-speed continuous shooting of up to about 20 frames per second with an electronic shutter, and automatic image transfer to a unique cloud service. The company’s first in-body image stabilization mechanism aims at the world’s highest level. It is intended mainly for high amateurs, but can withstand professional use.

They also report that nine full-frame Canon mirrorless cameras will be released over the next 20 years, which doesn’t actually sound like a lot. That equates to only 2 product lines being refreshed about every four years. Or three product lines every six years.

Exactly when the EOS R5 will be released is still unclear, although Canon UK announced it will make its debut in just three weeks at The Photography Show. There is word that it might make an appearance at WPPI in a few days, though.