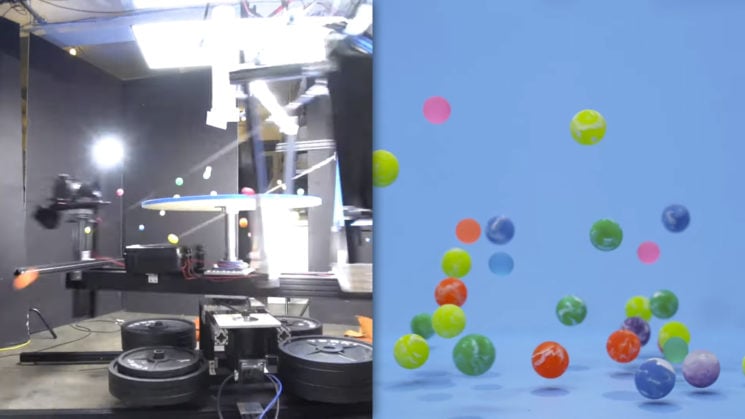 Steve Giralt is pretty well known for pushing things to the extreme when it comes to super slow-motion video. This time, though, he’s gone way overboard, by making a rig that spins a Phantom VEO 4K high-speed camera around a platform at 150 revolutions per minute.

The rig was made to film Jack Daniel’s Honey. They wanted to show a piece of lime spinning as it was falling into the drink as the whole thing was rotating around in front of the camera. Naturally, they couldn’t easily spin the lime as it fell, and they couldn’t really spin the drink, so the solution was obvious. Spin the camera.

The shoot was a partnership with ad agency FCB, Jack Daniel’s Honey and Bubba’s Chop Shop. The behind the scenes video above isn’t really a step-by-step how-to, but it does illustrate the principles and show the amount of engineering that went into making it work. In order to get a complete rotation before the lime fell into the drink, it had to be incredibly fast, with the camera movement reaching speeds of 32 miles per hour.

Giralt writes on Facebook that they decided to test out the rig with some bouncy balls, which you can see in the screenshots above, shooting at an even faster rate than they did for the drinks, and the result is pretty epic. In the behind the scenes video, you can even see the partitions around the rig waving in the turbulence of the spinning rig, which was fighting up to 23G of force.

Robotics and motion control fascinate me. I’ll never get to this sort of level just messing around with my Arduinos and Nema17 stepper motors, but it’s still a fun topic to explore.